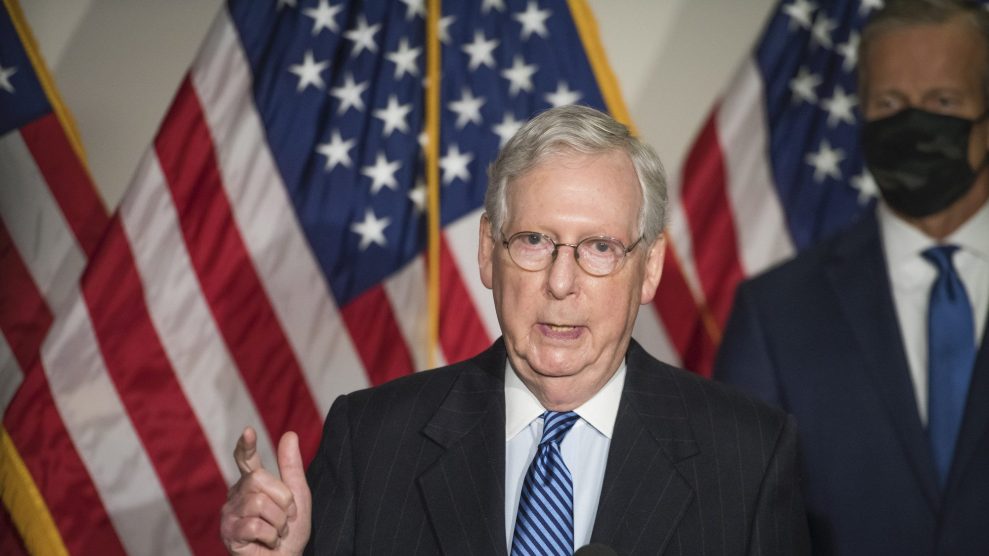 If Joe Biden is president and Congress is still divided, there will probably still be large-scale spending on green infrastructure, like renewable power, electric vehicles and transit. But any hopes for climate requirements for businesses, like a clean energy standard, would feel much farther off.

Publicly, environmental groups have claimed success, saying this election was the most focused on climate of any in history and that Biden’s plan is solid. Privately, they know that much hinges on the two undecided Senate seats in Georgia, which will decide whether Republicans or Democrats have a majority.

“Even though there might be obstructionism coming from Republican leadership in the Senate, we think that there will be many opportunities for Democrats and Republicans to come together to pass strong legislation,” said Michael Brune, executive director of the Sierra Club.

“Everything doesn’t start and stop with the US Congress. In order to win on climate change we will need to continue to see leadership everywhere across society, in our schools, in our private sector, in our states across the country,” he added.

If Biden could convince Congress to spend $1.7 trillion on a green recovery, that would reduce US emissions in the next 30 years by about 75 gigatonnes, avoiding a temperature rise of 0.1C by 2100, according to the Climate Action Tracker. That may seem small, but it could significantly lessen the harms of the climate crisis and also encourage pollution reductions in other nations. Already the world is more than 1C hotter than before industrialization. International agreements aim to keep that to 1.5C to 2C.

Outside of Congress, Biden could pursue climate progress with agency regulations—stopping new oil and gas drilling on public lands, tightening air pollution rules that will also help with climate change and backing out of Donald Trump’s fight with California over standards for cars.

But those measures are likely to be challenged by industry and could ultimately make their way to a final decision by the conservative supreme court, which Trump and the Senate majority leader, Mitch McConnell, were able to lock in weeks before the election. Plus, the new president could for some time have his hands full just reversing Trump’s cuts to environmental protection.

Even some Democrats could be hesitant to significantly increase the federal deficit for the purpose of climate stimulus spending, said Ben Pendergrass, senior director of government affairs for Citizens Climate Lobby.

While a progressive Green New Deal is not in the cards, inaction also won’t be tolerable for most lawmakers, Pendergrass said. He believes people who care about climate change “should view this as an opportunity.”

Under a moderate president who is concerned about climate change, Republicans could have more space to support the expansion of renewable energy and green infrastructure, even if they won’t vote to penalize fossil fuels.

Biden’s first climate work will be through stimulus funds aimed at lifting the economy out of the pandemic downturn. Climate change is one of four crises spotlighted on his government transition website, along with the pandemic, the economic recovery and racial equity. The focus of the Biden climate plan is to “create union jobs by tackling the climate crisis,” the website says.

Rhiana Gunn-Wright, climate policy director at the liberal think tank the Roosevelt Institute, said every dollar of stimulus funding will either help or hurt climate action.

“Even things that are very good for people are not necessarily carbon neutral because they’re going to spend that money on gasoline, on power that’s coal-fired and natural-gas-fired. And that’s not their fault,” Gunn-Wright said.

Fossil fuel companies have sought and claimed about $5.8 billion in pandemic assistance, according to her group. Easy-to-fund, shovel-ready projects like expanding highways threaten to lock in emissions.

Wright said although a stimulus package will not include big decarbonization measures, like additional legal authorities for agencies, it will be a significant start.

“There are a number of big new laws we’re going to need,” she said.

Kate Larsen, a director at the economic research firm Rhodium Group, said a Democratic majority in the Senate would be critical to getting a good portion of the way toward the goals the US agreed to in the international Paris climate agreement, but without that majority, stimulus spending is the “fastest way a Biden administration can jumpstart clean energy efforts.”

The firm found the US spent just 1.1 percent of its stimulus dollars on green measures. The EU and its member countries, by comparison, spent 18.8 percent on pro-environment efforts.

Many states and businesses too will be trying to reduce their climate footprints, although some are clinging to a fossil-fuel based economy. Democrats saw losses in state legislatures that will probably hamper climate efforts.

A Biden administration could aim to help states cut emissions, but the pandemic has critically injured already weak state budgets and resources.

Paula DiPerna, a special adviser to CDP (the Carbon Disclosure Project), said businesses are more likely to be on board with climate action because they have suffered from the lack of regulatory continuity and certainty that comes from the pendulum swing of American elections.

“If you marry the climate change challenge with the infrastructure improvement, I think you have a trigger for economic recovery. That’s Biden’s strength,” DiPerna said.