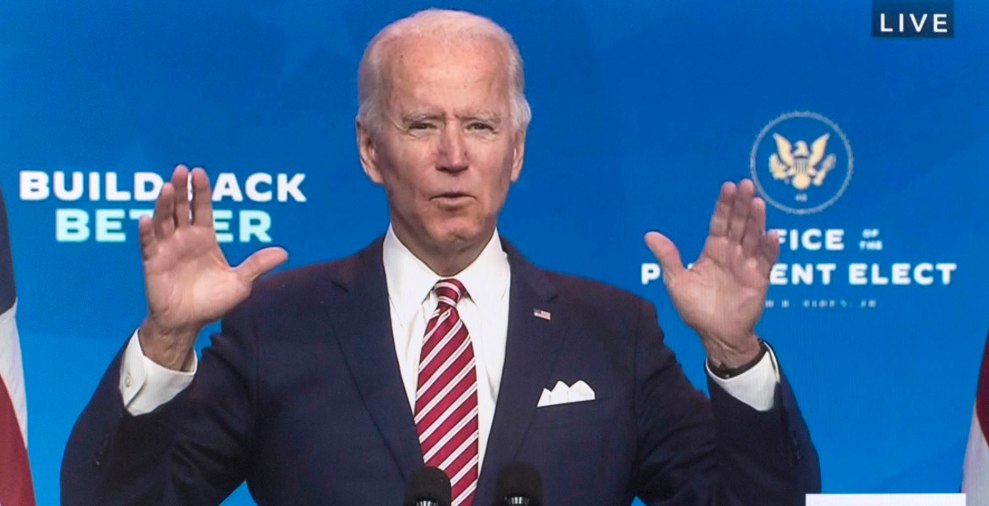 When Joe Biden delivered his first speech as president-elect two weeks ago, he focused on his mandate to “marshal the forces of science and the forces of hope in the great battles of our time.” Climate change was high on that list. After another year of unprecedented climate disasters, Biden will enter office with the most ambitious plans of any incoming president to wean our country off fossil fuels.

To deliver on his promises of “getting climate under control,” Biden will need to follow the prevailing science that suggests the United States achieve about a 45 percent reduction in its greenhouse gas pollution by 2030. He can’t afford to wade through years of congressional gridlock to get there. Instead, he will have to exploit the broad powers of the executive branch, using existing law to get as close as possible to the target.

Biden’s first plan should be to “reinstate the more than 101 health and environmental safeguards that the Trump administration has been trying to undermine.”

Last year I looked at the ways an incoming president could deliver results in the likelihood the 2021 Congress isn’t on board with Green New Deal advocates’ aggressive reimagining of the economy. Harvard Environmental and Energy Law Program Executive Director Joseph Goffman, a former Obama EPA official, told me then that one of the markers of “an incoming president’s actual seriousness” would be to come in with a plan that identifies “all the tools the executive branch has to promote climate solutions and clean energy.”

Goffman is now working on that plan as one of the lead members of Biden’s EPA transition team. Biden has already released a broad outline for 10 executive actions he will sign. Some of the top priorities include enforcing the Clean Air Act, improving energy efficiency, requiring companies to disclose the risks they face from climate change, preserving lands, and using federal budgets to buy clean energy. And he plans to rejoin the 2015 Paris climate agreement that President Donald Trump exited earlier this month.

That list was just a starting point, and there’s still a lot more he can do to jumpstart climate action. I surveyed experts in the environmental community and former Obama administration officials for their ideas on how Biden can forestall a climate catastrophe.

Fossil fuel drilling on public lands and offshore accounts for a full quarter of US energy sector emissions. During the campaign, Biden promised a moratorium on new drilling on public lands. Biden has less flexibility when it comes to existing leases, and even less power when it comes to drilling on private lands. That’s where reinstating Environmental Protection Agency regulations become important: Soon after Trump took office, he reversed requirements that the oil industry report and repair methane leaks, loosened regulation of mercury emissions from coal plants, and weakened rules for the disposal of byproducts of coal. World Resources Institute’s US Director Dan Lashof says Biden’s first plan should be to “reinstate the more than 101 health and environmental safeguards that the Trump administration has been trying to undermine.”

Biden’s moratorium on new leasing likely can’t last forever without an act of Congress, because the the Mineral Leasing Act calls for the government to auction lands for leasing at regular intervals.

What Biden can do is make sure the government doesn’t continue its longstanding practice of giving away public lands for practically nothing—for example, it currently charges fossil fuel companies as little as $2 an acre for 10-year leases. We’re subsidizing fossil fuels in other ways as well, by setting the fees companies pay the government for drilling, known as royalties, too low to account for drilling’s external costs. Royalties do bring in billions in revenue each year, but they don’t reflect the true environmental costs from the drilling that the taxpayer will some day have to clean up. During the pandemic, Trump cut these royalties from their typical range of 12.5-18.75 percent to 0.5 percent, according to the Center for Western Priorities.

On the campaign trail, Biden promised to invest in places—often communities of color—that face the worst effects of pollution. To make good on that promise, he’ll have to do more than just bring back the EPA’s Office of Environmental Justice, which Trump dismantled. Peggy Shepard—who served as the chair the EPA’s independent National Justice Environmental Advisory Council from 2001-2003, and is now executive director for the New York-based environmental group WeAct—said the EPA hasn’t given enough weight to disenfranchised communities’ perspective. She wants to see the White House create a new advisory position focused on environmental and racial justice. “We need an administrator who is going to shake up the EPA, think about how it’s structured, and integrate environmental justice in decision making,” she said.

Another area the EPA should focus on, according to Shepard, is its contracts with states that allow them to carry out and enforce environmental standards. With some revising, the EPA could, for example, forbid new chemical plants in historically polluted communities. “The EPA really needs to think more strongly about their partnership with states and how they might be able to be stronger,” she added.

The mismatch between the US financial industry’s rhetoric about fighting climate change and its actual fossil fuel investments—which are rising each year—has environmentalists calling for more scrutiny of Wall Street investments.

Biden has already pledged to take executive action to require companies to disclose how climate change imperils their assets, but environmentalists and financial experts think he can push that further.

Graham Steele, director of the Corporations and Society Initiative at Stanford Graduate School of Business, made the case in a 2020 report for the Great Democracy Initiative that existing provisions of the Dodd-Frank Wall Street Reform and Consumer Protection Act of 2010 grants regulators the power to reign these investments in:

Dodd-Frank established new mechanisms for federal regulators to tackle risks that threaten the entire financial system, many of which can be deployed to mitigate the financial risks of climate change. Financial regulators should force large financial institutions to internalize the costs of climate risk through rigorous stress tests, increased capital requirements, and margin requirements for capital markets trading. If these measures prove insufficient, financial agencies have authority to prohibit institutions from making further investments in climate change drivers and to require divestiture from climate-related assets

This one is already one Biden’s list of 10 executive actions. The federal government spends $500 billion in contracts each year for a wide range of products and services. Biden can direct agencies to buy cleaner cars and energy. He can push for cleaner energy infrastructure in other ways, too: He plans to use existing loan programs, like the Department of Transportation’s, to boost electric rail and cut diesel reliance.

The Department of Energy has the power to issue energy efficiency standards for appliances like water heaters, furnaces, and light bulbs. It may not be the most exciting climate solution out there, but overall these standards could save us from carbon emissions equivalent to 25 coal plants-worth by 2050.

Biden will have to go back to the drawing board on Obama’s Clean Power Plan, which required states to cut pollution to bring down emissions 32 percent nationally by 2030. The good news is that despite Trump’s promises to bring back coal, the market has still managed to overtake what was now clearly an overly conservative goal as coal is replaced by cheap renewables and gas. The EPA could put forward a Clean Power Plan 2.0 that sets a much more ambitious target, putting the country closer to the 100 percent clean electricity target Biden promised by 2035.

Transportation is more of a mixed bag for executive actions than the power sector—but it’s an even more urgent area for Biden to tackle, says WRI’s Lashof. He needs to ramp up fuel efficiency standards for passenger cars and heavy-duty vehicles like trucks. Lashof hopes to see the Biden administration “not only restore the car standards that were in place before Trump came into office but build on them and set standards that drive new emissions to zero by 2035.”

There is a problem with using executive power alone to combat climate change: The White House must rely on laws that were written for an era before climate change, so bold action will face more scrutiny from courts. That’s especially true given the new conservative supermajority in the Supreme Court. And many executive actions still fall short of the boldest proposals of a Green New Deal. For example, Biden alone couldn’t increase blue collar workers’ wages by creating millions of new clean economy job without a stimulus from Congress.

Biden will have to walk the same fine line that the Obama administration did, balancing the stakes of climate action against the risks of courts intervening. Megan Ceronsky, a former Obama White House senior advisor on climate change, says we can make a lot of progress with this strategy. But, she added, “we do need Congress to legislate—to enact climate and environmental justice legislation, so we can address these urgent problems more efficiently and more comprehensively.”