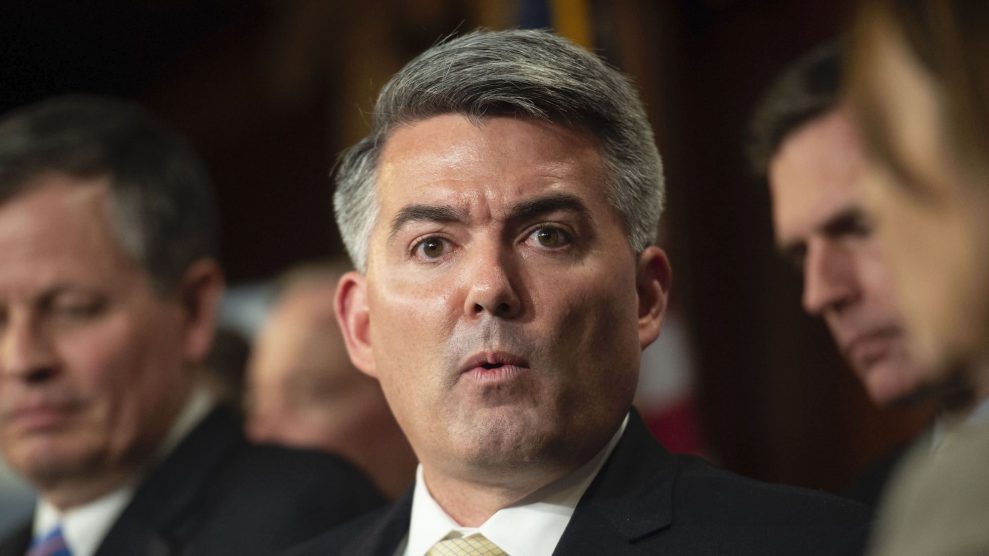 Facing an uphill battle for reelection in a state where two-thirds of registered voters polled last month said they favored a Senate candidate who promised “aggressive action” on climate change, Colorado Sen. Cory Gardner (R) has billed himself as a “national leader” on climate issues and run three separate ads casting himself as a pragmatic environmentalist.

But in a 2017 audiotape HuffPost obtained, Gardner squirms out of questions about what is causing climate change, instead leaning into conspiratorial thinking that efforts to curb carbon emissions are part of a larger plan to “control the economy.”

“There are people who want to control the economy as a result of their belief about the environment,” Gardner said in a previously unpublished interview with a local newspaper columnist in his native Yuma County in rural eastern Colorado. “Absolutely, there are.”

Throughout their 17-minute phone call, Gregory Hill, a novelist who writes a column for the 136-year-old weekly Yuma Pioneer, fired off an unsparing barrage of questions that the senator tried to deflect from a position on climate change that is out of sync with scientific reality and the political consensus among Centennial State voters.

“I certainly think that the climate is changing,” Gardner said.

“I’ve heard you say that before,” Hill responded. “But here’s my question: Is it changing as a consequence of the human introduction of carbon dioxide and other carbon compounds into our atmosphere?”

“Well, I don’t think there’s any doubt that humans have an impact on the environment around us,” Gardner said.

Hill grew audibly frustrated. “Let’s be clear, because when I step outside and exhale, I’m having an impact on the environment. But are humans essentially causing climate change?”

“I think that humans do have an impact on the environment,” Gardner repeated.

Pressed to state clearly that gases from fossil fuels accumulate in the atmosphere and trap the sun’s heat on the planet, an effect that scientists first grappled with more than a century ago, Gardner said he didn’t want to get “into a loaded political debate.”

Hill asked Gardner to name “those people” seeking to use climate change “to control” the economy.

By 2050, natural gas use would need to decline worldwide by nearly 60 percent, oil use would need to fall by 80 percent and coal use by nearly 95 percent to keep global warming from exceeding a catastrophic 1.5 degrees Celsius above pre-industrial averages, according to research by the United Nations’ Intergovernmental Panel on Climate Change, a consortium of scientists from droves of countries. A study published last November found that fossil fuel production remained 120 percent higher than would be consistent with a 1.5 degrees scenario.

Calls to nationalize oil companies and electricity production have grown among the Democratic Party’s resurgent left wing. But Gardner’s opponent sits on the opposite end of the party’s spectrum.

On the campaign trail, Democratic challenger John Hickenlooper has promised to end subsidies for fossil fuel production and said he supports halting all new drilling on public lands. In June, he said he wants “to make fracking obsolete.” But the former Colorado governor is also an avowed centrist with deep ties to the state’s energy industry. As part of a past bid to defend the gas- and oil-extraction practice known as hydraulic fracturing, the governor famously sipped water treated to remove toxic drilling fluids, prompting progressives to pejoratively nickname him “Frackenlooper.” When he ran for the Democratic presidential nomination last year, Hickenlooper insisted in an op-ed that the movement for a Green New Deal “sets us up for failure.” He defeated a climate-focused progressive for his party’s Senate nomination in June.

“There are people who want to control the economy as a result of their belief about the environment.”

This year, Gardner sponsored the Great American Outdoors Act, a law to permanently fund the federal Land and Water Conservation Fund that the GOP-controlled Senate hastily passed in a bid to boost Republicans’ election prospects amid widespread discontent over the party’s handling of the environment.

It may or may not sway Colorado voters. After all, the legislation solved a problem that Gardner himself had helped to create. The Republican lawmaker had voted in 2011 to eliminate most funding for the National Park Service fund and endorsed cutting $16 million from its budget in 2018.

And as Eric Sondermann, an independent Colorado political analyst, told InsideClimate News, “Democrats are so desperate to retake the Senate and send Cory Gardner packing that there are a lot of Democratic voters who are willing to overlook some issues they normally wouldn’t.” Hickenlooper “is never going to be as much of an oil and gas guy as Gardner,” Sondermann said.

It’s that desire to unseat Gardner that convinced Hill to share his interview with a reporter. Following their testy Tuesday morning call three years ago, Gardner’s team contacted Tony Rayl, the editor of the Yuma Pioneer, to complain about the columnist’s tone and ask whether Hill truly worked for the paper. Hill, who said he is on the autism spectrum and reacts angrily when someone appears to be evading simple questions, was embarrassed at losing his temper.

“I felt like a failure,” he said in a phone call with HuffPost. And in a county of roughly 10,000 people, he didn’t want his mostly conservative neighbors to see him as “the shrill, hysterical version of the liberal that they already have in their mind.”

The senator’s staffers reinforced that feeling. “It felt like this intimidation thing that worked,” Hill said. “It worked on me more than anybody.” So the interview didn’t run in 2017.

Gardner’s office did not respond to HuffPost‘s request for comment.

People in Colorado are also grappling with unignorable signs that the climate is changing. This summer’s monsoon season never really arrived in the state. The warmest August since records began in 1895 bled into unprecedentedly hot September days. By October, every inch of Colorado was in drought, with roughly half the state in “extreme drought,” and an already historic wildfire season scorched more than 500 square miles of the state.

“We live on a dirt road,” Hill said. “It’s so fucking dry and dusty, every time a car drives by, it’s just this fog of dust that settles into the low parts of the ground and sits there.”