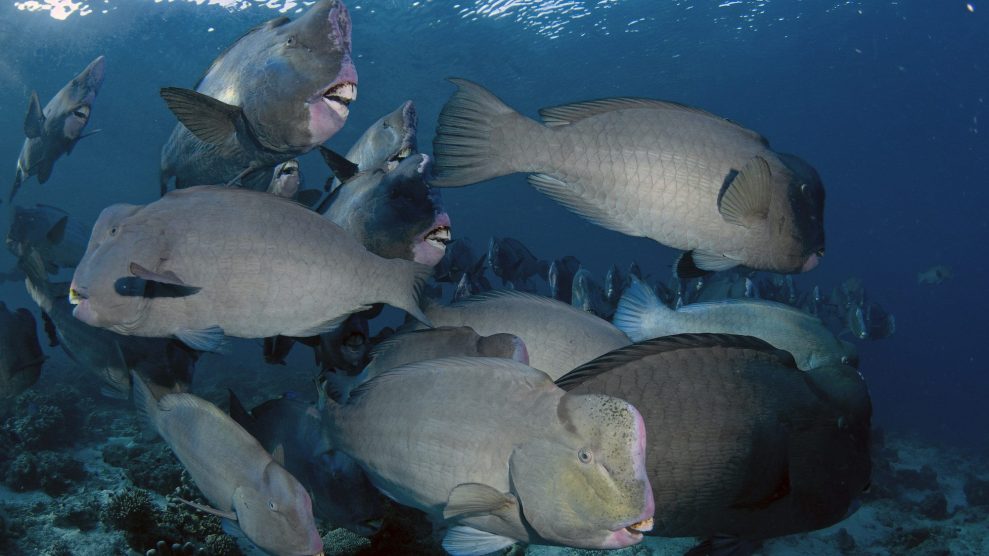 Among the many egregious scientific inaccuracies in Finding Nemo—fish can talk, sharks form support groups, turtles wax their shells—perhaps none is more glaring than the conceit of fish maintaining friendships. As many a marine biologist has noted, fish aren’t in it to make friends—they’re in it to survive and reproduce.

But scientists are uncovering a fascinating exception in coral reefs, not unlike the one Nemo called home: Here fish of various species band together, developing social networks exactly to survive and reproduce. By arranging underwater cameras on a plastic scaffolding above reefs, and using algorithms inspired by video games to determine where the fish are looking, the researchers modeled how individual fish monitor each other’s movements to determine whether an area is safe or dangerous. These social networks make it safer for fish to gobble up the algae that would otherwise choke coral reefs if they weren’t around to keep it in check. If too much algae grows, it keeps light from reaching the corals, preventing them from harvesting the sun’s energy. Break up this social network by overfishing, and the consequences ripple across the whole ecosystem, the researchers argue in a new paper published Monday in the Proceedings of the National Academy of Sciences.

“We’ve seen through Facebook, through Twitter, that you can glean incredible volumes of data to reach really powerful insights about human behavior,” says lead author Michael Gil, of the University of Colorado Boulder, UC Santa Cruz, and the National Oceanic and Atmospheric Administration. “Technology is now allowing us to bring that sort of renaissance of big data into nature.”

Gil and his colleagues have amassed that data by essentially turning coral reefs into video games. From above, the camera array watched the fish move around the reef. The researchers placed a waterproofed iPad on the seafloor and played a video of something called a “looming stimulus,” basically a black circle that expands to mimic an approaching predator. “This has been shown to scare the bejesus out of all sorts of critters in lab experiments,” says Gil. As you can see in the GIF above, fish in the wild are no different.

“Fish that we might have thought are kind of boneheaded are, in fact, embedded within social networks.”

The researchers trained an algorithm to recognize individual fish and then tracked them as they swam about. They borrowed a technique called “ray casting” from early first-person shooters like Wolfenstein, which cast rays from the perspective of the player’s character to render what should be in their view at a given moment. “You can map out what that player ought to be seeing in a three-dimensional virtual environment,” says Gil. “We can repurpose the same technology, the same idea—but we can do it with fish.”

So in that GIF, the red ray is tracking how the fish is seeing the looming stimulus on the iPad—as the circle on the tablet suddenly grows bigger, it grows bigger in the fish’s eye, thickening the ray. Eventually the black circle grows big enough that the fish who are watching it get spooked and scatter. As they swim away, the white rays shown in the video are tracking how each fish is eyeballing the others around it. Same principle here: The thicker the ray, the more the neighbor is in our subject’s field of view.

By scaring the bejesus out of fish over and over, all the while tracking what each individual is looking at, Gil and his colleagues gathered tons of data that paints a new portrait of the social dynamics of reef fish. These are different species like parrotfish and rabbitfish, mind you, not schools of conspecifics—a complex social network of fish taking cues from one another. “Fish that we might have thought are kind of boneheaded are, in fact, embedded within social networks,” Gil says. “We’re talking about species of fish that don’t typically form schools. And we’re talking about a bunch of different species, but they are nonetheless connected through flows of information. And these flows of information have really strong effects on individual decisions.”

Even if they aren’t a part of a school, fish turn out to be habitual followers. By frequenting a particular area of a reef, they’re unintentionally telegraphing important information for other fish, even of different species: Here is food, and here I am safe from predators, and so you will be, too. You and I do the same when we’re walking a street looking for a place to eat—you’re going to choose a crowded restaurant because the people within are telegraphing information about its desirability, however unintentionally. “On the flip side, if you see a fairly empty restaurant, you might conclude—especially at dinnertime—’Oh maybe the food’s not that good,'” Gil says. “Or maybe there’s even a food-poisoning risk. So it sort of seems similar to these fish, except for them the stakes are a bit higher. They’re actually looking for patches that they can eat from, and not get eaten by, say, sharks.”

The informal social network that these fish form is, like Facebook, a powerful surveillance protocol, which the researchers have now precisely characterized. They’ve found that fish are more likely to stick around an area filling their bellies with algae if others are also around. And their experiments show that if a fish is seeing the looming stimulus on the iPad but also seeing other fish with the same eyeball, it’s less likely to freak out. “So in other words, if there’s a bunch of fish between them and the scary thing, they’re way less likely to flee from the scary thing,” Gil says.

Characterizing such subtle dynamics is a departure from how ecologists typically model ecosystems, tending to write off in-the-moment decision-making as inconsequential to long timescales. “Under this convention, we tend to treat wild animals as kind of dumb,” Gil says. “We’re really kind of bucking tradition. And we found that this convention could be way off.”

“Under this convention, we tend to treat wild animals as kind of dumb. We’re really kind of bucking tradition. And we found that this convention could be way off.”

Using the data they’ve gathered from the reef, Gil and his colleagues have created mathematical simulations—highly accurate video games, really—to show how these seemingly inconsequential interactions in fact have serious consequences for the health of the reef over long timescales. “You can play with that ecosystem like you would a game,” Gil says. “You can impose different human-driven pressures on it, and you can see how it responds. These ecosystem models are incredibly valuable, because they allow us to understand how these gigantic, complex ecosystems grow and change over really long timescales, from decades to centuries, even millennia.”

The results are at once troubling and promising. In their simulations, the researchers found that it’s not just the magnitude of a threat like overfishing that damages a reef ecosystem, but the rate. When people remove fish, they’re removing an invaluable controller of the algae that can get out of hand, blanketing corals and killing them. “But we’re also removing the social influence that those fish had on the other fish in their social network,” Gil says. “And so those fish are then left with less information about when it’s safe to go out and eat and control these algae. And this feedback has these ecosystem-level consequences.”

The researchers’ modeling finds that those consequences include ecological collapse if overfishing happens rapidly. “On the other hand, you could approach that exact same target level, but slower—and in some cases even slightly slower—and you can actually preserve the entire system,” says Gil. “The whole system can be sustained for centuries, in the absence of other drivers like climate change. This whole phenomenon happens again because of simple individual decision-making by these fish.”

Simply put, there’s safety in numbers. If you lose those numbers quickly, you lose that safety quickly. “For herbivores, the more individuals there are, the bolder they get, and the more they feed,” says Luiz Rocha, curator of fish at the California Academy of Sciences, who studies reef ecosystems but wasn’t involved in this research. “So if you remove a bunch of individuals—by fishing or anything else—the fish that are left will be more shy and feed less, eventually leading the ecosystem to collapse quicker than if we considered only population numbers.”

This new research, then, could help create more sustainable fisheries, which is good for everyone: If ecosystems are preserved, and so are the species that live there, you don’t obliterate a critical source of protein for many people around the world. “In fisheries, one challenge is that our models make long-term assumptions about fish populations that aren’t well matched with the shorter timescales of management actions, or the many timescales of fish ecology and biology,” says Meredith Moore, director of fish conservation at the Ocean Conservancy, who wasn’t involved in this new work. “This study brings shorter-term fish social behavior into models, which is an encouraging step forward toward better understanding how fish populations and the ecosystem respond to pressures like fishing, and could ultimately improve decisions about how to keep fish populations healthy.”

So Bruce the shark from Finding Nemo had it half right: “Fish are friends, not food.” Fish are by necessity friends with each other—but only to form a social network that protects them from sharks like Bruce. Keep those social networks intact, and we might protect fish from humans as well.