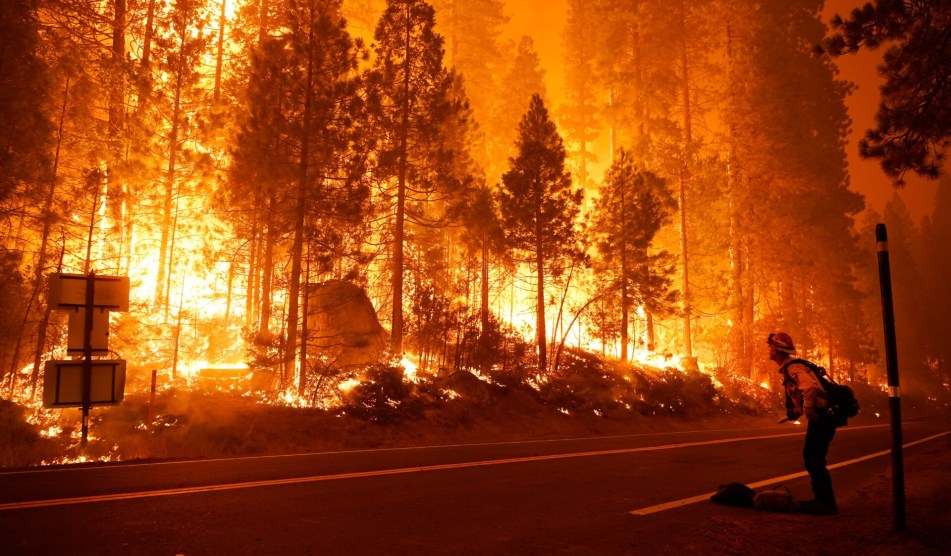 Two weeks ago, after freak lightning strikes torched Northern California but before the inferno of Labor Day weekend had begun, a friend called to talk, like you do when the world is turning to crap and nothing is stable or makes sense. In the past six months she’d fled New York for rural West Marin (due to the pandemic), and West Marin for San Francisco (due to smoke). Now she was planning to leave San Francisco for Los Angeles, as the gross air had descended here. We joked, as I’d joked with every friend this summer, that we should all just drop out and start a commune on a lake in Maine. “Every commune needs lesbians!” she said. “I’ll be our lesbian! California is going to become unlivable!”

Two weeks ago, this was a funny conversation. By Sunday, it was not.

This was the weekend that climate change, in California, stopped being about the future. The weekend that the idea that COVID-19 was worse than climate change, or fascism was worse than climate change, disappeared. The experts, of course, had known this for some time. But by the point August turned into September, the drumbeat of California’s environmental anomalies had grown so horrid and relentless that not even the professionals could stay detached. Way back, a lifetime ago, on Sept. 3, Daniel Swain, UCLA’s extreme-weather climate scientist who’s made a name from himself by tweeting, in plain language, just what the hell is going on, wrote, “This *gesturing wildly and in every direction* is utterly exhausting.”

Still, through Friday the 4th and into Saturday the 5th, Swain tried his professional best to keep his readers up to date on the all-time record high temperatures in a staggering number of California cities and the unheard-of airlift rescue of 200 people from the Creek Fire surrounding Mammoth Lake. But by Saturday evening, his emotional and lexicographical reserves were growing thin. “Yeah, it is almost literally unbelievable, but I’ve been saying that a lot lately,” he wrote while commenting how the Creek Fire had exploded to more than 100,000 acres even before it reached the part of the Sierra where, due to climate change, bark beetles killed millions of trees.

For a moment early Sunday morning, he appeared to get his vocabulary and mojo back: “Active pyrocumulonimbus (“fire thunderstorm”) activity occurred through night—resembling volcanic eruption…”

But by 8 a.m. he’d exhausted his vocabulary and himself: “These are getting harder and harder to write.”

The stakes had shifted; the essential subject-object dynamic changed. The earth—at least the part of it that is California—was no longer a backdrop for our actions, the set of our play. It had become the diva, the star of our horrible drama, the villain demolishing cascades of plans for all of us little specks hubristic enough to believe we could still make them.

Midmorning Sunday, hoping to escape the heat and smoke, I walked across San Francisco’s Great Highway, on the far western edge of the city, to Ocean Beach. Last year, the city closed part of the Great Highway due to blowing sand (and it plans to move a whole stretch in the future due to sea level rise). This spring, the city closed the road again, so residents could exercise, socially distanced. Then on Sunday, Mayor London Breed shut down not just the Great Highway but the parking lots along Ocean Beach. Labor Day weekend is Burning Man weekend in the traditional Bay Area calendar. Given that Burning Man 2020 was canceled, 1,000 people gathered Saturday night on the beach instead.

The next day the mayor called the partiers “absolutely reckless and selfish,” and she closed the beach parking to make an example of them.

Marin, San Francisco, Los Angeles, Maine. Since March we’d been canceling plans and making backup plans, and then scrubbing those plans, too.

Back at my house, I sat in front of my fan and my HEPA filter. My mother called. She was going to see my sister in Marin that day, because Marin was going to be cooler than Napa, where she lived. But Mill Valley was 106. Napa was 110. And there is still our pandemic, so no socializing in the air conditioning inside.

I tried to call Gov. Gavin Newsom, who declared a state of emergency in Fresno, Madera, Mariposa, San Bernardino and San Diego counties that day. I called former Gov. Jerry Brown. I wanted a civic parental figure, a leader to help me, and the rest of California, think about the state’s past and its future, to analyze how we’d come to this point where we’d made so many plans we later had to call off. When Brown called me back, he was in a very practical mood. What he would say to Californians who are feeling grief this weekend over the condition of the planet and the state?

He was all for the individual actions we all know we need to take—change the cars we drive, the foods we eat. But what he really felt we needed to do was harness our values, consolidate our pain into outward pressure and political power, not retreat into fantasy communes. World leaders have not done nearly enough to meet the climate crisis because we have not demanded enough of them. So, Brown said, we need to break down and reverse engineer the problem. Start the causal chain: “build the belief that builds the consensus that allows the leaders to make the decisions that we need to make.” This could be grounded in individuals, right here, this weekend. But the consensus and accountability needed to fan out across the globe. “When I say that leaders I mean the mayor, the city council, the governor, the legislator, the Congress, the president, President Xi, President Putin, Prime Minister Modi, the whole crowd. They’ve got to get on board. If any of the major players play hooky, then we all will suffer.”

Since 2006, when California passed its landmark greenhouse gas reduction legislation, the state has basked in a glowing reputation with regard to climate policy. In some ways we legitimately earned our gold star. But we’ve also used sleight of hand: shell games of carbon credits, a focus on inventing incredible new sustainable-energy tech while still pumping over 10 million barrels of oil a year out of the ground. With the wildfires, too, we put on a fantastic performance: uniformed firefighting armies, a huge air show. But in our overzealous suppression efforts we left our forests choked with fuel. Now we have megafires like the ones that shut down eight national forests (and camping in all national forests in California) this weekend. Fires so powerful they create their own weather. Not even our dazzling army can fight them.

So is Brown hopeful we’ll meet this moment?

The Jesuit-trained, student-of-Buddhism governor took a deep breath and let his spiritual side talk. “I focus on what I can do. Hope is an interesting virtue,” he said. “There’s three, right? There’s faith, there’s hope and there’s charity. And we all know what faith is: You either believe or you don’t believe.” Charity: “You’re generous, you help people, you love people OK, I know what that is. Hope. Hope is what? A state of mind? I’m not quite sure.”

Brown paused again. “Hope derives from a belief that life has good things in store. I definitely think that’s possible. I also think the alternate is possible, too.”

At dusk, Sunday night, I sat on my back porch with my husband and drank a cocktail the color of the smoky orange sky. We’ve both been writing about fire and as a result, we both know too much. We know that even if California starts lighting prescribed fires at the rate we need to ignite them, our Septembers will be filled with smoke for the rest of our lives. But we need to make those plans anyway, and we need to keep them, too. The timing never feels right for the big, important parts of life. Your children are too young and then they’re too old.

The climate crisis was too distant… until Sunday in California. Then we woke up with its thick, hot smoke upon us and realized it was smothering our lives.