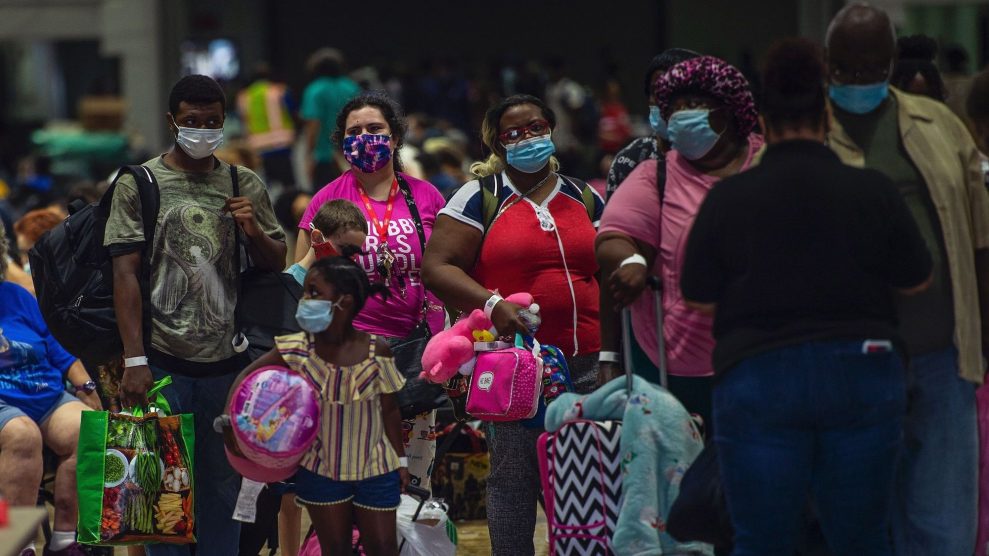 People prepare to board a bus for evacuation before the arrival of hurricane Laura in Lake Charles, Louisiana on August 25, 2020.Andrew Caballero/Getty

A 100-mile stretch from Texas to Louisiana is facing an “unsurvivable storm surge” as Hurricane Laura hurdles towards land from the Gulf of Mexico, the National Hurricane Center of the National Oceanic and Atmospheric Administration has warned. Laura was initially expected to make landfall early Thursday morning, but according to the New York Times, 125-mile winds could mean that it will  make landfall between Houston, Texas, and Lake Charles, Louisiana, by Wednesday afternoon.

That possibility makes the warnings from NOAA increasingly urgent. “Only a few hours remain to protect life and property and all actions should be rushed to completion,” the agency said in an announcement Wednesday morning. “This surge could penetrate up to 30 miles inland from the immediate coastline,” bringing dangerous gusts and flash flooding with it.

Unsurvivable storm surge with large and destructive waves will cause catastrophic damage from Sea Rim State Park, Texas, to Intracoastal City, Louisiana, including Calcasieu and Sabine Lakes. This surge could penetrate up to 30 miles inland from the immediate coastline. #Laura pic.twitter.com/bV4jzT3Chd

Half a million people live in the regions of Texas and Louisiana where emergency evacuation orders are in effect, and this includes some of the poorest counties in the nation. According to Diane Yentel, president of the National Low Income Housing Coalition, Calcasieu Parish, which lies in the path of the hurricane, is home to 30,000 impoverished people. “Many in the path of Hurricane Laura are already reeling from coronavirus, and financial fallout, and were struggling mightily to avoid homelessness even before coronavirus and this disaster,” she says. Without the resources to leave, she worries many will attempt to ride out the storm.

“Many in the path of Hurricane Laura are already reeling from coronavirus, and financial fallout, and were struggling mightily to avoid homelessness even before coronavirus and this disaster.”

Nonetheless, public officials are urging residents to leave now if they haven’t already. “If you travel during this storm, you will be putting your life at risk,” Louisiana governor John Bel Edwards tweeted on Tuesday night. The requirements for an effective evacuation have changed since the last hurricane season. With the pandemic, states are racing to outfit emergency shelters with supplies of masks, gloves, and COVID-19 tests. When it comes to the evacuations themselves, Texas Governor Greg Abbott said the state had arranged for more than 400 buses to help evacuees, which he hopes will be sufficient to ensure social distancing.

Hurricane Laura is expected to be reclassified as a category four hurricane—the second highest designation. Winds of up to 156 miles per hour will make the affected area “uninhabitable for weeks or months,” according to NOAA.

As I reported in May, when NOAA first announced the coming season would likely be especially active:

The danger of hurricanes isn’t limited to the damage done during the event itself, but also in what comes later, especially flooding, which causes an average of $8.2 million in annual damage in the US. Despite this, according to 2018 study by Governing, population and development growth in 100-year flood zones have outpaced growth outside of them since at least 1990. Another study, published from the University of Bristol also in 2018, suggested that FEMA’s flood zone boundaries, in which 13 million people live, were too small, and that approximately 40 million people are potentially exposed to a 100-year flood. That’s the kind of flood severe enough that it only has a one percent chance of happening; in other words, is likely to come only once a century.

The combination of growing populations facing more severe natural disasters is further complicated by the fact that the National Flood Insurance Program, which provides more than 90 percent of flood insurance, is $20 billion in debt.

This hurricane is just the most recent extreme weather event during a particularly active season marked by “warmer-than-average sea surface temperatures in the tropical Atlantic Ocean and Caribbean Sea, coupled with reduced vertical wind shear, weaker tropical Atlantic trade winds, and an enhanced west African monsoon,” NOAA announced in May. “If the Atlantic hurricane season this year lines up with NOAA’s projections, it will be the fifth severe hurricane season in a row,” I reported after the announcement. “A joint NOAA-University of Wisconsin at Madison study released this week found that temperature rise increased the likelihood of storms growing to the severity of hurricanes by eight percent each decade for the last 40 years.”

Considering those heightened conditions are the result of human-caused climate change, they’re unlikely to diminish on their own. At the time, Penn State University meterologist Micheal Mann told USA Today,  “As we continue to warm the planet, hurricane intensities will increase further,” he said. “There’s no new normal. It’s an ever-shifting baseline toward more destructive storms.”