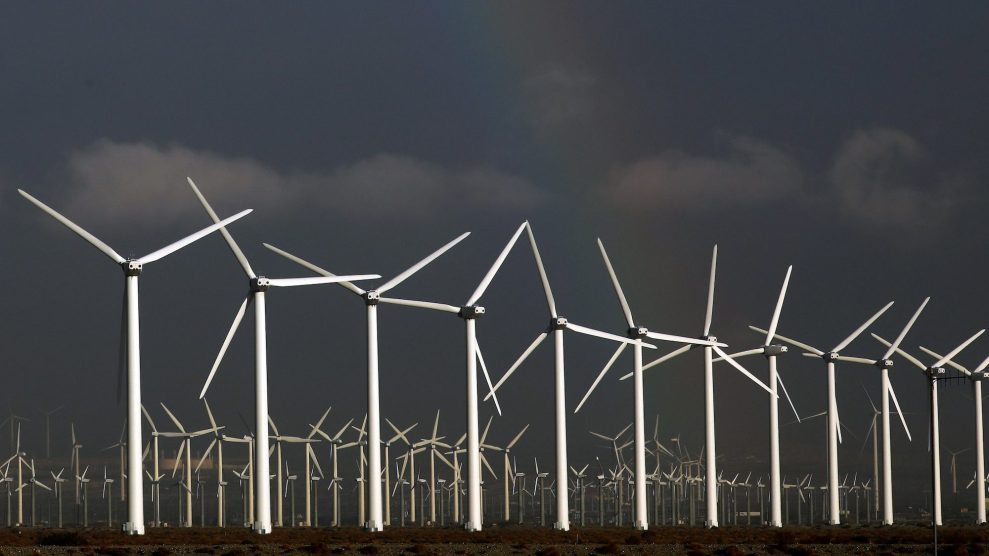 Despite America’s continued reliance on fossil fuels as its primary source of energy, the plummeting costs of alternative energy sources—like power harnessed from the sun or wind—is making them an increasingly viable choice on the competitive market. So much so, that a UC Berkeley report released on Tuesday argues that by 2035, 90 percent of the US could be powered by renewables.

“Technically, it’s feasible,” says Billy Pizer, an expert in climate change who teaches at Duke University’s Sanford School of Public Policy and was not involved in the Berkeley research. “I think people have thought about this for awhile and, with a combination of renewables and storage, you can certainly reach those sorts of targets.”

Researchers took the available data on renewable energy and created two scenarios for the next 15 years. In one, energy policy remains the way it is now, without ambitious policy changes to encourage the growth of renewable energy. The other imagines what ambitious policy changes implemented over that time could yield. In the first forecast, 55 percent of the US energy infrastructure would come from renewables. That falls short of the change necessary to meet the Paris Climate Agreement goals, but does reflect the dramatically lowering costs in the renewable energy sector. “Cost reductions in clean technology have occurred much faster than anticipated just a few years ago,” said Dr. Amol Phadke, senior scientist at UC Berkeley’s Center for Environmental Public Policy in a press release. “It is technically and economically feasible to deliver 90 percent carbon-free electricity on the U.S. power grid by 2035.”

“It is technically and economically feasible to deliver 90 percent carbon-free electricity on the U.S. power grid by 2035.”

To reach the more ambitious but still achievable 90 percent goal by 2035, the devil is in the details. While the technology to harness renewable energy has been successfully scaled up to higher capacities in recent years, the report also relies on large scale use of what are known as “grid scale batteries”—batteries that are able to store collected energy for an electricity grid until it’s needed. “Grid scale batteries are still just beginning to be used in certain circumstances,” Pizer said, as part of the recent effort to upscale renewable energy sources. But, he noted, the cost could be prohibitive.

Unlike fossil fuels, most of the costs in renewable energy infrastructure come in the beginning phases, which involve purchasing usable land and installing wind turbines or solar panels. The cost of long-term maintenance is less significant than securing start up finance. A solar farm large enough to help support a medium-sized city could easily cost tens of millions of dollars. I reported on Cincinnati’s success in securing funds to build the nation’s largest municipal solar farm—but financing these projects pose unique challenges.

The report suggests that the state and federal government could lead the way to finance and facilitate the energy reform necessary for a greener 2035.  But even under a progressive president, the logistics of the energy sector are often determined on the state level, or across several states where transmission lines carrying power cross. When the laws of those states are different, things become even more complex.

A companion study from the climate policy think tank Energy Innovation heavily leans on Congress-driven policies, like tax credits to renewable energy companies and nationalized standards for clean energy infrastructure, to reach the goal. “What an incredible opportunity for economic stimulus,” Sonia Aggarwal, vice president at Energy Innovation, stated in the press release. “A federal clean energy standard, supported by government investments in deployment and American manufacturing, could put us back on track for a healthier economy.”

Those potential government investments can’t come a moment too soon. There are growing concerns within the renewable energy sector that the economic consequences of COVID-19 could halt its growth. In response to the economic fallout, the federal government offered fossil fuel tax benefits of $2 billion through the CARES Act, a $2 trillion economic stimulus package for businesses and local governments. Meanwhile, employment in the clean energy industry could drop by 13 percent in response to the crisis. Without relief, the more ambitious vision of 2035 outlined in the report may become impossible to realize. As with so much else, the fate of clean energy will depend on the priorities of the president and lawmakers who come to Washington in January.