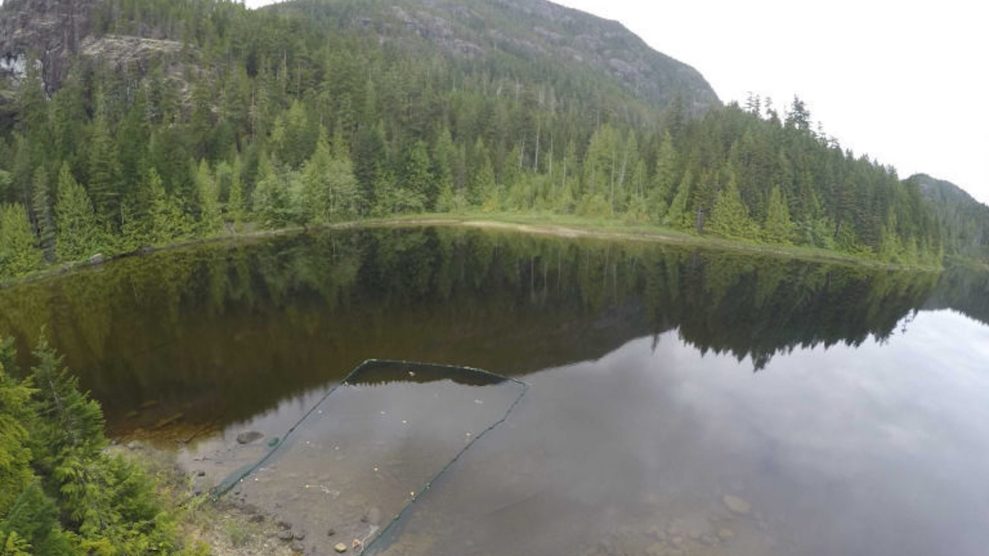 Once the experiments are set up, humans can hang back for a while. This cage was placed in peaceful Cedar Lake, British Columbia, in 2015. Thor Veen

This piece was originally published in Atlas Obscura and appears here as part of our Climate Desk Partnership.

If May 2020 was like any other spring, Daniel Bolnick, an ecologist at the University of Connecticut, would be wrapping up a semester of teaching and preparing to head into the field. He and as many as two-dozen collaborators would be fanning out to sites in Alaska and Canada’s Vancouver Island, where they would traverse lush forests with snow-capped mountains in the distance, and splosh into lakes and streams.

By day, they would wade into the cold water to study threespine stickleback—metallic little fish that measure approximately two inches long and weigh a little more than a penny—and investigate ecology, evolution, and immunology, focusing on, among other things, the comparatively enormous parasites that hunker down inside the fish. (Picture a translucent gummy worm about half the mass of the unfortunate stickleback itself. Or wince at the thought of a 150-pound human wandering around with a 75-pound worm wriggling inside them.)

At night, the whole team would crash in a cozy cabin, with people sleeping wherever they could find room—on the couch, on the porch, in hammocks in the nearby woods. “In a normal year, it’s fun and entertaining, and people get along well, so it works,” Bolnick says. “But cramming 10 people into a 600-square-foot cabin would not be a good idea right now, to say the least.”

In May 2020, in the midst of a global pandemic, nothing is normal—including seasonal fieldwork. Bolnick and his team, like many researchers around the world, are scrambling to figure out how to make it happen in the era of social distancing.

Bolnick’s ears perked up about COVID-19 back in January; by February, he was convinced that the field season was in trouble. In March he took to Twitter to put out a call for other researchers in the same position—and for people who already lived in the areas where he was looking to do fieldwork, and might be able to help.

For Carolyn McKinnon, the request came at just the right time. Before the outbreak, she had been working as an educator at the Bamfield Marine Sciences Centre on Vancouver Island, taking students—ranging from kindergarteners to university groups—out to the beach or for rides on a boat, and teaching them about the ocean. The gig dried up in mid-March, she says, when many Canadian public schools went remote.

McKinnon was able to hang on to a job for a few more weeks, working on lesson plans and other tasks, before she was laid off at the end of March. Fortuitously, she says, “my friend is on science Twitter a lot, and knew that I was looking for work, because my summer job wasn’t looking like it was going to go through.” That friend came across Bolnick’s call. McKinnon got in touch with her résumé, then Bolnick enlisted her to go out and collect stickleback, euthanize them in accordance with animal-use protocols (which often include administering an overdose of an analgesic), and store their bodies in a freezer.

“Cramming 10 people into a 600-square-foot cabin would not be a good idea right now, to say the least.”

The call came at the right time for Diana Rennison too. An assistant professor of biological sciences at the University of California San Diego, Rennison also studies stickleback—and was lamenting a similarly scuttled research trip to Vancouver. Rennison is Canadian, and the postdoc on the project is a German citizen. Neither of them has a U.S. green card; both are on temporary work permits. A few months ago, as travel bans came into effect, the researchers began to worry that they would have trouble hopscotching the borders. “We realized we were going to have to throw in the towel at the end of February or first week in March,” Rennison says.

When she saw Bolnick’s call, she thought maybe they could team up. “By chance, he and I were both planning to collect [stickleback] from largely the same set of lakes,” Rennison says. “So if we weren’t in this situation, we would have sent independent field teams to these lakes, and now are sharing a lot of the same samples.” Now they’re co-hiring a small field crew—including McKinnon—to work at the same sites and tackle projects for both of their labs.

The field season should be kicking off this month, but it hasn’t been seamless so far. Even though they were able to hire McKinnon and a few others who can set out traps and, say, distinguish a stickleback from a salmon, there have been several other logistical hurdles to clear. They had to update their permits, and in addition to the sites Bolnick and Rennison planned to sample in the Campbell River area—a four-hour drive from where McKinnon is, along a slow, winding road pocked with potholes—the researchers are keen to secure approval to sample stickleback close to Bamfield, on the southern side of the island, where McKinnon has already been living.

Before sampling some of the sites near Bamfield, McKinnon is waiting for permission from the Huu-ay-aht First Nation, which must sign off before she can collect on any lakes in the group’s treaty territory. Storing the collected specimens will require a bit of creativity too. Rennison’s in-laws happen to live on Vancouver Island, and she plans to stow her samples in a freezer in their garage until she can drive up from California and retrieve them.

Many isolated communities around the world are bristling at newcomers who are fleeing cities, which tend to have dense clusters of disease, and McKinnon thinks researchers who are doing fieldwork in remote areas have an obligation to mitigate the risk they’re adding to the mix, and ask themselves whether their particular projects really need to happen right now.

“It’s a lot of stress that’s pushing you to go out into the field,” she says. “But I do think taking a minute to really think about the impact your research could have on the community you’re going to is important. If you can find a workaround like Dan has, where he’s already hiring people living and working near the communities he needs samples from, that seems like a better option.”

It’s part of the appeal of doing fieldwork near Bamfield too—she wouldn’t be traveling into the community from somewhere else, which may have a higher rate of COVID-19. “I think I’ll get approval to do lakes around Bamfield because that will just be me,” she says. “I don’t think I pose much of a COVID risk to the community.”

“Taking a minute to really think about the impact your research could have on the community you’re going to is important.”

For scientists there are financial considerations, which often dovetail with a desire not to raise specimens whose lives would be wasted. Bolnick’s team has spent upwards of $50,000 breeding and caring for fish that can be released only on Vancouver Island in a narrow window this year; take them through another generation, and the genetic components of the experiment unravel. “Either we use them in the next month,” Bolnick says, “or we don’t use them at all.”

There are professional worries too. Graduate students and postdocs who aren’t able to get into the field might have incomplete data sets, which could endanger publication prospects or blunt their chances in an already fierce job market. One of the Vancouver Island projects is run by a postdoc gearing up to find a job. “Having him potentially lose an experiment he’s spent two years building up is quite sobering,” Bolnick says.

And then there are almost-too-good-to-be-true opportunities that researchers can’t bear to squander. On the Kenai Peninsula, in Alaska, for instance, Bolnick’s team is in the middle of an experiment that he says “could never be restarted.” The researchers recently had the chance to introduce stickleback to a “tabula rasa environment”—nine lakes where the Alaska Department of Fish and Game used the chemical rotenone to evict northern pike, an introduced species, by wiping them out. (Other species were collateral damage.) As far as natural laboratories go, it would be hard to ask for a better setup.

“We’re not going to have nine lakes at our disposal to repopulate ever again,” Bolnick says. The first-generation piscine residents will breed this year. “Every summer that we miss sampling, we’re missing a generation.”

For the Vancouver Island fieldwork, the plan is to dampen the risks of COVID-19 transmission by encouraging the crew to practice social distancing as much as possible—from the rest of the community, and from each other. Members of the field crew are being asked to self-isolate for two weeks before they come in contact with one another, Rennison says; Bolnick says that they’ll travel from site to site in separate cars. Some may visit different lakes on different days.

But total solitude isn’t ideal either, he adds, because a lot can go wrong in the woods. Someone on Bolnick’s team once tumbled over a root and broke an arm; another punctured a foot on a stick. “Accidents happen, and no one wants to be heading to the hospital in this era,” he says. An extra set of eyes might be welcome.

But out at the wonderfully lonely field sites—thickly fringed with forests and tousled by breezes—Bolnick expects it will be easy to stay fairly far apart. The wide-open water, he says, “is about as safe a spot as can be.”