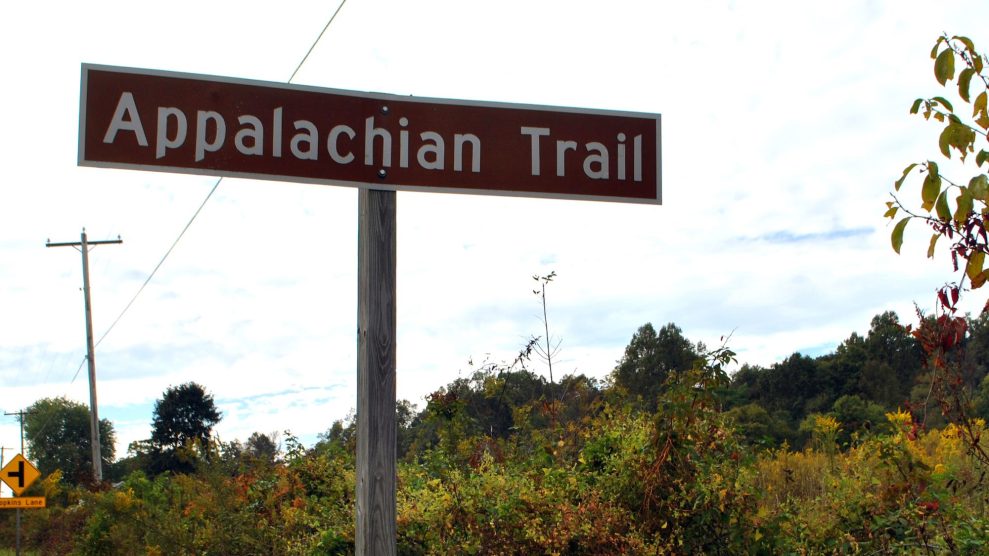 A sign for the Appalachian trail cutting through Washington County in Maryland.Joe Tennis/AP

The Appalachian Trail is a 2,200-mile passage that runs through 14 states, beginning in Georgia and ending in Maine. The proposed pipeline would extend 600 miles through West Virginia, Virginia, and North Carolina. As part of the National Park System, the Appalachian Trail is protected as under the 1920 Mineral Leasing Act, a statute that prohibits federal agencies from establishing oil or gas pipelines on National Park land.

Still, Virginia-based Dominion Energy and North Carolina’s Duke Energy, argue that although the trail is maintained by the National Park Service, the land surrounding it under the jurisdiction of the US Forest Service, which issued permits for the construction of the Atlantic Coast Pipeline in 2017 with support of the Trump Administration. The pipeline’s lawyers argue that its construction is essential to keep up with the increasing demand for energy on the coast, claiming in a legal brief that the US Energy Information Administration “estimates a 29 percent increase in usage by 2040.” Detractors point to the waning popularity of fossil fuels.

In an amicus brief filed on behalf of the environmental groups, Michael K. Kellogg, who argued the case before the court, dismissed the petitioner’s argument as “metaphysical,” arguing that they “rely on a fiction that attempts to divorce the Appalachian Trail from the land it encompasses.” Energy company lawyers, on the other hand, say that a ruling against them would establish the trail as a “2,200-mile barrier” between gas reserves in West Virginia and the East Coast, and that the 1968 National Trails System Act, which effectively put the Appalachian Trail under National Park oversight, didn’t nullify the US Forest Service’s decision making powers over the land.

In 2014, when Dominion and Duke teamed up to draw plans for a pipeline to carry fracked gas from Harrison County, West Virginia, through Appalachian mountain ranges to the eastern seaboard, they were initially met with resistance from environmental groups. Three years later, the project got its building permits. In 2018, the 4th Circuit Court of Appeals put the kibosh on the $8 billion pipeline when it ruled that the Appalachian Trail was indeed protected by its National Park status. The court also rebuked the Forest Service for a failure to diligently investigate “impacts the pipeline might have on Forest Service lands.” The Forest Service and the energy companies subsequently appealed this decision to the Supreme Court.

That the nation’s highest court even agreed to take up the case is puzzling to some experts. Hope Babcock, a professor at Georgetown University Law Center, worked with the environmentalists’ legal team as they prepared for the case as part of the university’s moot court program. She says it was difficult to understand why the court would take on a case where the petitioner’s logic was so warped. “The complexity [of the energy companies’ case], the inability to hold onto a threat of an argument, this just doesn’t look like a Supreme Court case,” she says. “We keep waiting to see the [Supreme] Court say ‘We made a mistake. We’re sending it back to the Fourth Circuit.'”

She suggests that the Mineral Leasing Act statute forbidding oil and gas pipelines from crossing National Park land directly applies to a scenario like this one. “They had a clear statute,” she says. “And the statute said ‘Thou shalt not.'”

“When Congress says something clearly, it’s over,” she says. “They blew through pretty clear rules on statutory interpretation.”

The conservative justices on the Court, who make up the majority, and liberal Justice Stephen Breyer seem skeptical about the environmentalists’ argument. The Wall Street Journal reported:

Chief Justice John Roberts said the environmentalists’ arguments could erect an “impermeable barrier” that would prevent the pipeline from crossing the trail and reaching East Coast customers.

Justice Brett Kavanaugh said the environmentalists’ position threatened enormous consequences, while Justice Breyer suggested the pipeline was less of a problem because it was running hundreds of feet below ground and not actually across the trail.

Though Babcock and her colleagues from the moot court preparations couldn’t figure out why the case—with a clear statute forbidding a pipeline on National Park land—found its way into the Supreme Court schedule, the environmental implications are concerning.

Even though the pipeline would run underground, its presence would be visible on the land’s surface. According to the Washington Post, the pipeline would have a “50-foot-wide cleared path along its length,” slicing across the trail and land surrounding it; not to mention the possibility of an accident happening along the pipeline. Babcock says the precedent of the ruling would mean a “camel’s nose is under the tent,” putting other National Park sites under the threat of similar projects.