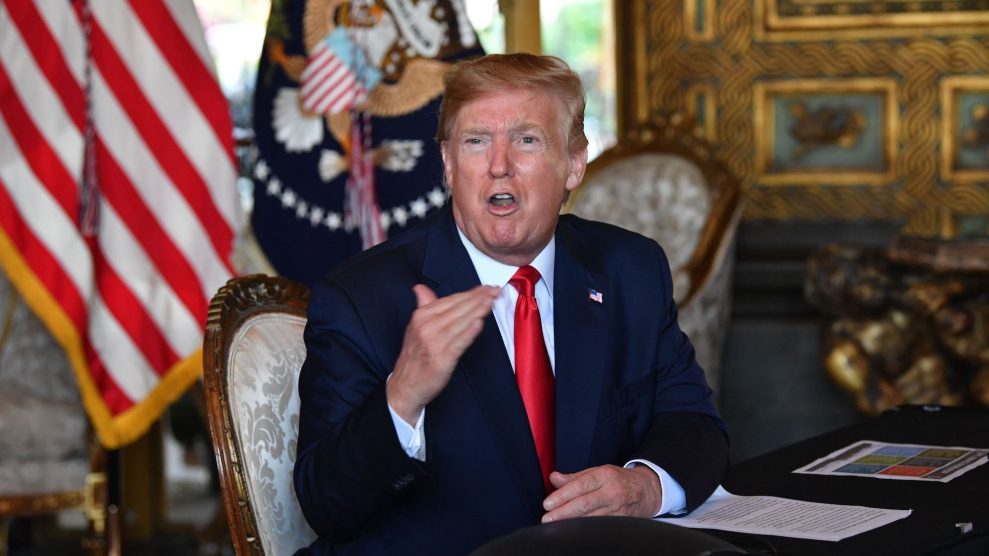 The Trump administration on Thursday unveiled plans to gut one of America’s most important environmental laws—a move experts say is as much of a handout to polluting industries as it is a slap in the face to science and local communities.

The proposed rules would change how the federal government implements the National Environmental Policy Act, a 50-year-old law that protects air, water and land by requiring federal agencies to conduct detailed environmental assessments of major infrastructure projects. Agencies would no longer be required to consider climate change when evaluating the environmental effects of pipelines, power plants, oil and gas drilling, airports, highways and other development.

President Donald Trump announced the reforms in a speech at the White House Thursday morning, saying the federal permitting process is “big government at its absolute worst.”

“The United States will not be able to compete and prosper in the 21st century if we continue to allow a broken and outdated bureaucratic system hold us back from building what we need,” he said.

The rules from the White House Council on Environmental Quality, which oversees NEPA, have been a long time coming. They seek to codify what has become common practice since 2017, when the White House rescinded Obama-era guidelines that tasked agencies with considering greenhouse gas emissions and climate change in NEPA reviews. The move is the latest in a relentless deregulatory effort by the Trump administration that has largely benefited the fossil fuel industry.

The controversial overhaul is aimed at speeding up energy projects and other development by limiting the number of projects that require in-depth environmental review and expediting the process for those that do. It would establish strict two-year limits for completing reviews on major projects and a one-year deadline for smaller projects. Trump on Thursday highlighted a number of projects that took a decade or longer to get federal approval.

Most alarming to environmentalists is that the proposal would allow agencies to not only ignore a project’s vulnerability to climate change, but also its “cumulative” effects on global warming, which is already wreaking havoc around the world.

Christy Goldfuss, a former chair of the environmental council under President Barack Obama and current senior vice president for energy and environment policy at the left-leaning Center for American Progress, called the proposal “the ultimate silencing of science and facts in our policymaking around infrastructure.” She said it puts a huge amount of power in the hands of industry.

“The oil and gas industry wins. The American people lose,” Goldfuss said. “The purpose of rewriting these regulations is to build new pipelines and more fossil fuel infrastructure. You would not have to look at the cumulative impacts of a wind turbine or a solar panel because there is no long-term pollution. This is about building towards the past and sticking our head in the sand about the impacts of dirty fossil fuels.”

The proposal would be the first major update to the law in more than four decades. The rules are certain to face legal challenges.

NEPA has long been a target of industry groups, developers and Republican lawmakers who say it places unnecessary burdens on business and is used as a tool to block and delay fossil fuel projects. Trump has prioritized advancing major pipeline projects like Keystone XL, a proposed 1,179-mile, $8.5 billion system that would transport some 830,000 barrels of crude oil per day from Alberta, Canada, to Nebraska. A federal judge halted construction of Keystone XL in 2018, ruling that the Trump administration violated NEPA by approving a federal permit without taking into account greenhouse gas emissions and climate change effects. Trump called the judge’s decision “a disgrace.” And appeals court later lifted that injunction.

The American Petroleum Institute, the oil and gas industry’s leading lobbying group, declined to comment on the specifics of the upcoming NEPA changes but pointed to a November letter in which it called on the Trump administration to “modernize” a review and permitting process it said would reduce “delays and uncertainties associated with infrastructure investment.”

Diane Katz, a senior research fellow at the right-wing Heritage Foundation, said “streamlining provisions” would help reduce the cost of roads, bridges and railways, but may not even go far enough.

“In fact, the NEPA is entirely out of sync with current environmental, political, social, and economic realities, and outright repeal would not make a whit of difference to the environment or public health.”

“In fact, the NEPA is entirely out of sync with current environmental, political, social, and economic realities, and outright repeal would not make a whit of difference to the environment or public health,” she said by email.

Trump is an outspoken critic of the federal permitting process and vowed throughout his 2016 presidential campaign to cut government red tape. “We built the Empire State Building in just one year,” he said in his 2018 State of the Union address. “Isn’t it a disgrace that it can now take 10 years just to get a minor permit approved for the building of a simple road?”

“While the goals of NEPA remain the same as they did 50 years ago, the environmental review process designed to improve decision-making has become increasingly complex and difficult to navigate,” he said. The regulatory update, he added, would “benefit our economy and environment” and provide greater certainty to “project sponsors and ordinary Americans seeking decisions on permits.”

But fewer projects requiring environmental review means fewer opportunities for the public to weigh in on potentially damaging construction.

“Trump’s gift to the fossil fuel industry and special interests will silence ordinary Americans while giving polluters a free pass to trash the environment, destroy public lands and kill wildlife,” Brett Hartl, government affairs director at the Center for Biological Diversity, said in a statement.

If the proposed reforms take effect, taxpayers are likely to end up footing bigger bills for infrastructure damage from climate-linked environmental disasters, as agencies would no longer have to consider the threat that sea-level rise, flooding, wildfires or extreme weather pose to a project.

“We will now be building infrastructure with a blindfold at a time when we know extreme weather is just getting more and more extreme,” Goldfuss said.

In the last decade, the US experienced at least 119 climate and weather disasters with losses exceeding $1 billion each, more than double the number of billion-dollar disasters during the 2000s, according to a federal report released this week. Costs from those disasters over the last 10 years exceeds $800 billion.

Interior Secretary David Bernhardt, a former oil lobbyist, said Thursday at the White House news conference that he was “thrilled” by Trump’s decision. The reforms “will be the most significant deregulatory proposal” the president implements during his time in office, he said.

“This proposal affects virtually every significant decision made by the federal government that affects the environment,” Bernhardt added.

Trump stressed the administration was just getting started.