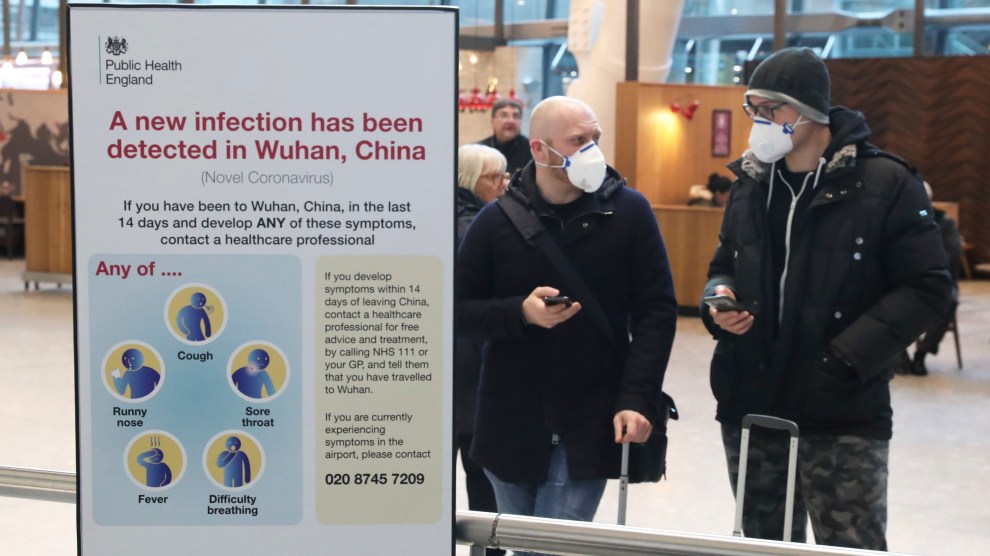 Coronavirus. Passengers arrive at Heathrow Airport in London after the last British Airways flight from China touched down in the UK following an announcement that the airline was suspending all flights to and from mainland China with immediate effect amid the escalating coronavirus crisis. AP

The coronavirus outbreak is intensifying, with at least 6,065 cases and 132 deaths worldwide, as of Wednesday afternoon. So far, doctors have confirmed five cases in the United States, all in people who have picked it up abroad. The virus doesn’t yet appear to be spreading between people in the United States, but public health experts warn that it’s almost certain that number of cases will increase in the coming weeks—and they’re scrambling to prepare diagnostic tests and treatment protocols.

This isn’t the first time a rapidly spreading virus has threatened the United States: In recent history alone, recall H1N1 in 2009, Ebola in 2014, and Zika in 2016. So have those outbreaks made us better prepared for an influx of coronavirus cases? We’ve made some progress in the last few years. But experts agree it’s not nearly enough.

That no one in the White House is coordinating a multi-agency response to coronavirus is “worrisome.”

First, the good news: In the wake of the Ebola and Zika outbreaks, the Trump administration actually made a few strategic moves to prevent the spread of disease around the world. It invested substantially in the CDC’s Global Health Security program, which helps set up infectious disease monitoring and treatment centers around the world. In 2017, the administration created a $70 million Emergency Reserve Fund at USAID to respond to outbreaks of contagious disease, along with a similar $50 million Rapid Response Fund at the CDC.

On the other hand, in May 2019, the president’s proposed budget for global health was dramatically lower than it had been in previous years—$8 billion for 2020, compared with more than $10 billion every year since 2010.

And here in the United States, epidemic preparedness hasn’t been a priority, to put it mildly. Let’s start with the leadership in the White House—or lack thereof. At the beginning of the Trump administration, public health legend Rear Admiral Tim Ziemer led a global health security team at the White House’s National Security Council. This, almost everyone agreed, was a very good thing: Ziemer had years of experience—under President George W. Bush, he had led a successful effort to fight malaria overseas. His team, a group of world-class infectious disease and public health experts—was working on implementing a national biodefense strategy to coordinate agencies in order to make the United States more resilient to the threat of biowarfare and epidemics.

But in 2018, when John Bolton assumed the role of national security advisor, Ziemer left, and Bolton disbanded his team, amid public outcry. No one has since filled the position. And Ziemer wasn’t the only public health advocate to jump ship: White House homeland security advisor Tom Bossert, a staunch advocate of infectious disease preparedness and the biodefense strategy, left soon after Bolton took over.

That no one in the White House is coordinating a multi-agency response to the coronavirus is “worrisome,” says Asha George, executive director of the global public health advocacy group Bipartisan Commission on Biodefense. “Is it the CDC director?” she says. “Where is the surgeon general? He could be issuing messages. But I’m not seeing any of that.” Rebecca Katz, director of Georgetown University’s Center for Global Health Science and Security, echoed those concerns. “The decision to get rid of the directorate within the NSC, the pandemic response officer—people in our field found that really distressing,” she said.

If Ziemer and his team had been able to implement the biodefense strategy they were working on, there would likely be a better plan for leadership, she said. But unfortunately, according to George, that strategy is currently languishing in bureaucratic limbo: “It just kind of lost steam.”

Three expert hospitals won’t be of much use in the case of a nationwide epidemic.

What else could that strategy have helped with? For starters, a plan for hospitals. After the Ebola crisis, the US Department of Health and Human Services and the CDC designated the three US hospitals that successfully treated Ebola patients as infectious disease centers—they received additional training, staff, and resources to prepare for future outbreaks. That’s a start, says George, but three expert hospitals won’t be of much use in the case of a nationwide epidemic. “If you have a disease that’s spreading, then having just a few hospitals is ridiculous.”

The biodefense strategy also would have helped set up a system to disseminate accurate, up-to-date information about the spread of disease. But Georgetown’s Katz said she has been disheartened by the lack of public information about the coronavirus. Ideally, she said, citizens would be able to check with local officials—say, their county health departments—for accurate updates, symptom lists, and instructions on how to get treated. Katz told me she wasn’t even sure if doctors, other healthcare providers, and local health departments know where to find the latest information. Ostensibly, they can check a CDC service called Health Alert Network, “but I don’t even know if everyone knows to go to it,” she said.

Preparing a country for infectious disease is a complicated process—to do it right will require sustained attention and resources, and it’s unlikely that a comprehensive plan will materialize in time to make a real difference as the coronavirus spreads. Still, the experts I spoke to agreed that the Trump Administration could take a few immediate steps that would dramatically improve our chances of weathering an outbreak. For starters, Trump could appoint someone at the White House to oversee the response to the virus, publicizing an easily accessible official source of public information.

That might not be top priority—George points out that Trump has a few other things going on. “We have an impeachment going on; we have some pretty significant national security things going on, with Iran, and with North Korea—and now they have to deal with coronavirus,” she says. “Trying to react and respond while all of this other stuff is happening,” she says, “is just really difficult.”