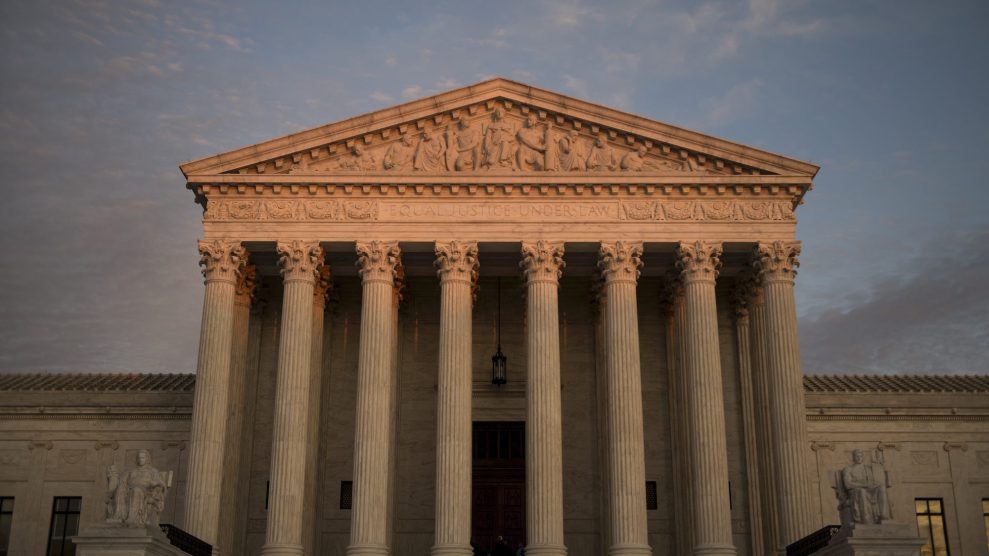 For decades, Anaconda Company Smelter operated an enormous copper smelting factory in Opportunity, Montana. And for more than seven decades, that factory spewed tons of toxic waste, mostly arsenic, into the community’s soil and water supply. In 1983, the EPA made Opportunity one of its Superfund sites, and ordered the Atlantic Richfield Company, which acquired the site in 1977, to pay more than $450 million to address the toxic waste in the area. As it turns out, that wasn’t nearly enough, said the lawyers for 100 families in the town whose case, Atlantic Richfield Company v. Gregory A. Christian, was argued Tuesday in the Supreme Court.

At issue was the decision by the Montana Supreme Court, which awarded the citizens $58 million in additional damages after they took ARCO to court for more funds. ARCO rejected the settlement, arguing that it was needlessly expensive and perhaps even illegal. Now it’s up to the nation’s highest court to decide if the EPA Superfund settlements can be supplemented by future plaintiffs. Though the case originates in a rural town of 500, it carries broad implications for the scope of EPA’s authority. It focuses specifically on how the agency deploys the Comprehensive Environmental Response, Compensation and Liability Act (CERCLA), a 1980 law that guides the EPA in how it holds groups responsible for environmental cleanup. Whether additional remedies, beyond the scope of CERCLA or EPA, can be used in an environmental clean up, will be decided by the court.

“It seems unusual to be able to go to the court because you disagree with [an EPA] measure,” Justice Elena Kagan said.

The $58 million that Montana awarded to the citizens of Opportunity came after they successfully argued that the Superfund money fell short of a complete clean up. (Superfund sites are spaces that store hazardous materials, like coal ash ponds or decommissioned mining sites that the EPA has identified for eventual clean up.) EPA and ARCO argued against the premise that anyone could challenge a Superfund settlement simply because they don’t think EPA’s plan was comprehensive enough. Paradoxically, the local residents are arguing for expanded environmental stewardship by limiting the authority of EPA and localizing cleanup decisions. That proposed shift seemed to give the Supreme Court Justices pause.

“What we don’t have,” Justice Stephen Breyer said, “Is 100,000 people and 50 states imposing conflicting duties [on Superfund overseers].”

EPA lawyer Christopher Michel suggested the best option would be to avoid litigation entirely, arguing that Opportunity’s residents should have proposed additional cleanup efforts directly to the EPA, rather than suing ARCO. He says their approach “jeopardizes EPA cleanup” because the subsequent efforts to address the toxic area could disrupt progress already made. Lisa Blatt, who represented ARCO, went even further, saying that any cleanup actions outside EPA purview could be illegal.

The residents’ lawyer, Joseph Palmore, took issue with the expectation that residents who live near Superfund sites petition the EPA every time they’d like to build, dig, or alter their land. He argued that the oversight EPA was suggesting went too far. “Their position is that every person in this 300 square mile site needs to get permission from EPA to dig a shovel of dirt,” Palmore said.

When determining who is responsible for the cleanup at Superfund sites, EPA uses the term “potentially responsible persons” (PRPs). In this case, ARCO is the PRP because, according to Palmore, Opportunity’s residents were never given that designation. Therefore, they’re not beholden to EPA when making decisions, cleanup-related or not, on their own property. If the EPA were suddenly to treat them like PRPs,  the federal government would then determine the actions of those who owned the land and not those responsible for the pollution. That possibility troubled Justice Kagan. “It would [be] a big deal,” she said. “To take a person like that and say, ‘You’ve lost significant property rights.'”

In the end, both liberal and conservative justices appeared to be reluctant to curtail the EPA’s power over Superfund settlements. Justice Kagen stopped short of agreeing that the EPA was responsible for deciding each individual’s compliance with CERCLA guidelines. “Why should the onus be on EPA, to find out who’s digging sandboxes?” she asked.