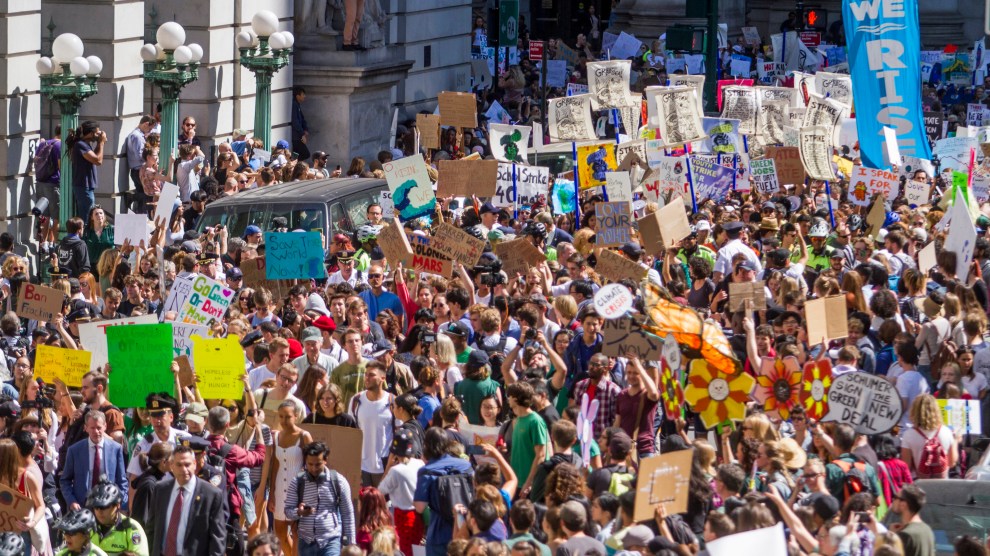 An estimated 60,000 New Yorkers flooded the streets of lower Manhattan to protest climate change Friday, where the late September sun warmed the city to nearly 80 degrees. In New York, as in countless places around the world, people ditched school and work to take part in the Global Climate Strike to push for meaningful governmental action against climate change.

New York’s public school students were excused from classes Friday to join the march from Foley Square to Battery Park. Students of all ages chanted, “Hey hey, ho ho, climate change has got to go,” and, “Fossil fuel or fossil-free, what will be our legacy?”

Some carried humorous signs, like one that nodded to Lizzo’s “Truth Hurts,” in which an illustration of Earth floats beside bold text that says, “I just took a CO2 test, turns out I’m 100% dying.” Others were punchier: “Planet Before Profit” and “Corporate Greed is Killing the Planet.”

The students we spoke to were passionate, thoughtful, and well-informed about the major contributors to climate change. Samantha Nowak, an 18-year-old student at Manhattan Marymount College, said that she uses reusable shopping bags and eats less meat because of climate change. “You can’t ignore something like this,” she said, referring to the size of the protest. “Hopefully it’ll get people active, calling their representatives and making more changes in their personal lifestyle.”

“Hopefully we can spark a larger change on a higher, government level,” her roommate Kandace Campbell, 17, said. “But also, it’s like, where is the hope for that, because how much do they care?”

Jake Eraca, a 17-year-old high school senior from New York’s Dutchess County, said he realized the severity of the climate crisis when Iceland commemorated the loss of its Okjokull glacier with a plaque warning that the country would lose all its glaciers in the next 200 years. “This monument is to acknowledge that we know what is happening and what needs to be done,” the plaque reads. “Only you know if we did it.”

Eraca’s younger sister, Jillian, 16, had similar fears.”I don’t know if I will have a future,” she said. “I think about if I’m gonna have kids, what their life would be like.” Phoebe Anderson, 17,  agreed. “I’ve always wanted kids, but now I’m just like, why think about it?”

Eraca said that the protests gave him hope, but that ultimately there’s more work to be done at the congressional level. “This is a good first step,” he said, “but if we don’t get recognition, we’re not gonna go anywhere.”

Two 20-year-old students at the Fashion Institute of Technology, Isabella Mayes and Chloe Dechambeau, wanted to call attention to the pollution in the fashion industry. Both students are minoring in ethics and sustainability, and they were critical of fast fashion like Zara and Forever 21.

Despite the bleak environmental outlook, Dechambeau and Mayes were heartened by the children who came to protest.”I’m overwhelmed right now by how many young people there are,” Mayes said. “I was almost brought to tears.”

One group of students said that corporate greed was at the heart of the climate change problem.”I think we need generally much more tight regulations on large corporations that are the biggest polluters, much more accountability,” said Uma Channer, a 19-year-old sophomore at Sarah Lawrence College.

Her friend Tara Blossom added that she supports Bernie Sanders’ promise to move away from fossil fuels and his emphasis on using renewable energy instead.

Sumayya Bisseret Martinez, a 19-year-old New York University sophomore, wanted to draw attention to racial exclusivity and classism in the environmental movement. “Let’s be honest,” she said. “Climate change most impacts…black and brown communities and people who have lower incomes.”

Among the younger protestors were three best friends in the eighth grade who sported clever signs bearing slogans they found online. Mary Rousakis, 12, said that she has become conscious of how her actions, like using plastic or eating meat, are affecting the environment. “I personally really want a good future ahead of me where we don’t have so many endangered species and extinction of species,” she said. “It kind of just puts a dimmer on my dreams and hopes for the future.”

“The government needs to focus more on our earth and how to clean it and help the environment instead of just focusing on profit,” her friend Grace Chen, 13, said. “It’s important for young people like us to talk about this because we are the future voters.”

“I think it is so great to see a big turnout to see how many people are supporting it,” said 13-year-old Nona Stislow. “It seems like there’s more hope for the earth, and I really hope it does make a difference.”