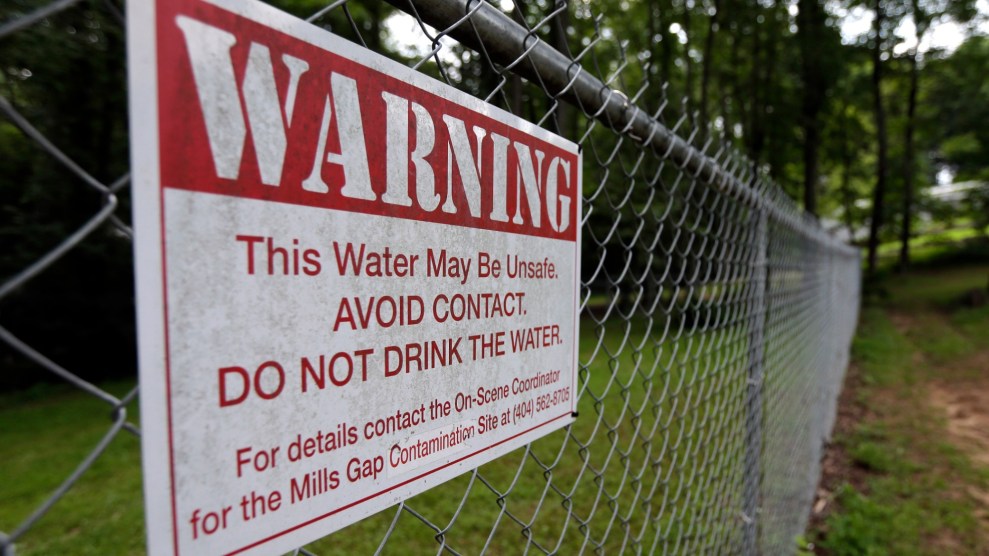 A Superfund site in North Carolina in 2014.Chuck Burton/AP

After Harvey dumped more than 60 inches of rainfall over southeastern Texas, one of the sites designated to be in need of clean up—which the EPA calls Superfund sites—flooded. Even a year later, local media were reporting on concerns about high levels of toxins still present at the San Jacinto River Waste Pits Superfund site.

There are thousands of contaminated sites in the United States, the Environmental Protection Agency says on its website, “due to hazardous waste being dumped, left out in the open, or otherwise improperly managed.” And as Hurricane Dorian made landfall over the coast of North Carolina Friday and dropped heavy rainfall in the area, scientists worry about a repetition of what happened with Hurricane Harvey: Chemicals being swept up in stormwaters and spreading into nearby communities.

“The thing that I’m worried about the most is Superfund sites hold the most dangerous chemicals known to mankind,” Jacob Carter, a research scientist at the Union of Concerned Scientists, says. “If the hurricane breaches Superfund sites, those chemicals can be carried with floodwaters into communities, likely disadvantaged communities which tend to be located closest to Superfund sites.”

There are multiple ways chemicals can end up leeching from Superfund sites during a hurricane like Dorian. The sites don’t even have to be directly in the storm’s path to be at risk, but in the general area that’s facing storm surge and flooding.

But water is not the only problem. Projected winds of over 100 miles an hour could create a “wind swath,” which means the areas potentially affected by sustained winds of tropical storm force or hurricane force.

“Those chemicals can end up in parks where children play and homes if they’re flooded,” Carter notes.

The maps below show the number of counties in North Carolina and South Carolina that have sites with known or threatened releases of hazardous substances, pollutants, or contaminants which the EPA has listed on their National Priorities List. In 2018, the New York Times reported, “The Carolinas are home to more than 70 high-priority Superfund hazardous-waste sites, including a former smelting plant in North Charleston near the coast that is contaminated with arsenic, antimony and other substances linked to health problems including cancer.” Following Hurricane Florence’s damage to the Carolinas, EPA noted as of October 3, 2018, that their assessment teams conducted preliminary inspections on 113 NPL sites, finding issues at only one site. Their update reads, “Due to flooding, the EPA found offsite impacts at the Burlington Industries Cheraw site located in Cheraw, SC. EPA is currently conducting a removal action at this site.”

Plus, Hurricane Florence triggered toxic coal ash spills in the Carolinas. At the time, Waterkeeper Alliance collected water samples across North Carolina to survey the damage and found high levels of arsenic in the Neuse River. When chemicals are swept up in floodwaters, “it’s impossible to characterize how much contamination washes away,” says Daniel Estrin of Waterkeeper Alliance, “and it never really goes away.”