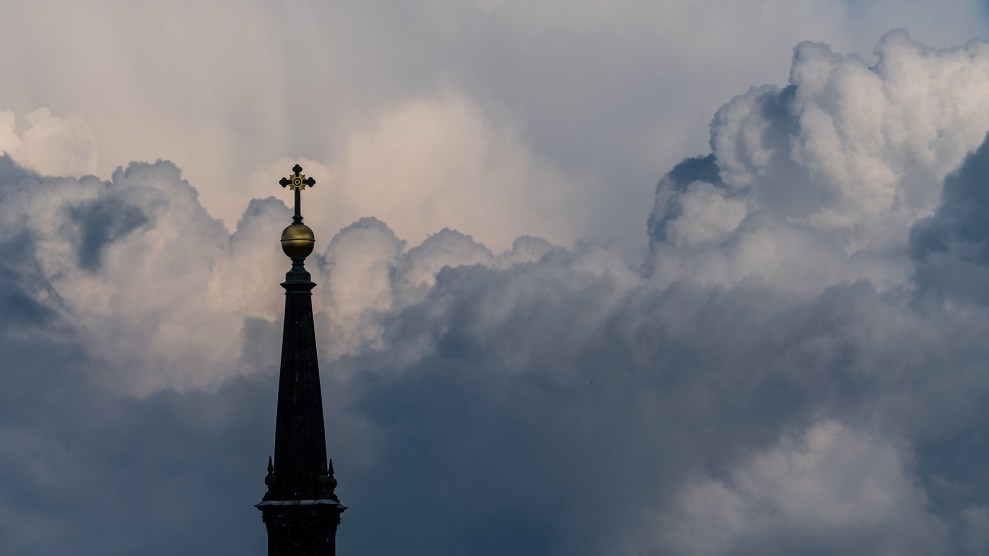 The Green New Deal has picked up endorsements from two major Christian groups, signaling a growing base of support among the faithful as climate change projections look increasingly apocalyptic.

The Unitarian Universalist Association passed a resolution at its general assembly in late June endorsing the Green New Deal resolution that Rep. Alexandria Ocasio-Cortez (D-N.Y.) and Sen. Ed Markey (D-Mass.) introduced in Congress five months ago. The main national organization for the egalitarian spiritual movement, which has over 1,000 churches in the U.S., vowed to “actively support the development of federal legislation to implement” the deal.

Days later, the national deliberative body of the United Church of Christ, a mainline Protestant sect with nearly 825,000 adherents and close to 4,900 congregations across the United States, also voted to endorse the Green New Deal. It called the policy framework “what is needed to preserve and restore God’s great gift of creation.”

Last week, Young Evangelicals for Climate Action, a youth organization within one of Protestantism’s most traditionally conservative denominations, praised what it called the Green New Deal’s “biblical principles” and pledged to work “toward translating these…into viable, bipartisan bills.”

The announcements bring new momentum to the effort to advance a sweeping national industrial plan to eliminate planet-warming emissions and provide millions of Americans with good-paying jobs that fortify infrastructure and build renewable energy—at a moment when that plan is facing fierce opposition. The religious endorsements could give the Green New Deal appeal in conservative districts as activists urge 2020 candidates to adopt its framework.

“You’ve got everyone from the Unitarian Universalists to the young evangelicals,” said Rev. Brooks Berndt, a 42-year-old United Church of Christ minister in the Cleveland area. “That’s quite a spectrum.”

Roughly 70% of the U.S. population identifies as Christian. Throughout American history, Christian clergy have taken leading roles in progressive social movements. They championed the rights of workers and immigrants amid the nation’s chaotic 19th-century boom. During the civil rights era, the Rev. Martin Luther King Jr. frequently cited the Bible to highlight the immorality of racism and spent his final years crusading against laws that preserved the poverty he saw as antithetical to the teachings of Jesus Christ.

When the so-called culture war shifted to fights over evolution, abortion and LGBTQ rights, a new generation of religious hardliners with national TV platforms forged a powerful conservative voting bloc. In the mid-2000s, as the oil industry’s propaganda denying climate science became a main Republican Party line, those voters adopted a similar stance.

When the Pew Research Center polled different Christian sects in 2015 on climate change, white evangelicals were the least likely, at 28%, to recognize that the planet is warming due to human actions. That compared to 41% of white mainline Protestants, 45% of white Catholics, 56% of black Protestants and 77% of Hispanic Catholics.

Yet the number of actual Christian deniers has plummeted over the past four years as mounting natural disasters, increasingly grave scientific forecasts and a rapidly growing political movement erase doubt over the cause of planetary changes. And new research published last week shows that religious messaging on climate resonates with Christians who already understand the crisis.

Providing “a better life for our children and grandchildren” came out as the top motivation among Christians and non-Christians to reduce planet-warming emissions, according to the study published in the journal Science Communication. But Christian respondents said they were also inspired by a need to “protect God’s creation.”

“[T]his research suggests that moral, religious, and social normative frames can be effective ways to engage Christians in the issue of climate change,” Anthony Leiserowitz, director of the Yale Program on Climate Change Communication and a co-author of the study, wrote in an email newsletter last week.

In 2015, Pope Francis, the leader of the worldwide Roman Catholic Church, released an encyclical― titled “Laudato si’,” or “Be praised”―outlining the theological case for combating climate change. The pope has repeatedly sermonized against the inaction on what he last month declared a “climate emergency,” calling the failure to reduce greenhouse gases “a brutal act of injustice toward the poor and future generations.” He has not, however, endorsed the Green New Deal, even as the idea is gaining traction in Europe, Canada and elsewhere.

Climate change, said evangelical Rev. Kyle Meyaard-Schaap, is “first a biblical, moral and gospel issue, rather than first a political issue.” As such, Young Evangelicals for Social Action decided not to endorse the Green New Deal resolution outright, lest the group alienate the conservative co-religionists it aims to influence.

“Rather than signaling which side of the tribal fight we’re on, we wanted to rise above that and set a lot of that aside and reflect that the Green New Deal actually reflects biblical principles,” said Meyaard-Schaap, 30, of Grand Rapids, Michigan. “We’re leveraging within our community the disaffection among young people with … the way in which our faith has become weaponized as a political tool.”

Yet, for others, the latest string of endorsements are less about the redirection of entrenched institutions than about the political diversity of American Christianity.

“There’s no doubt that certain elements of Christianity have been hijacked by forces that are really antithetical to justice and the gospel,” said Berndt, who serves as an environmental justice minister in the United Church of Christ. “There’s a long history of Christianity, back to the Roman Empire, where there’s faith that gets co-opted by empire and faith that forms resistance to empire.”