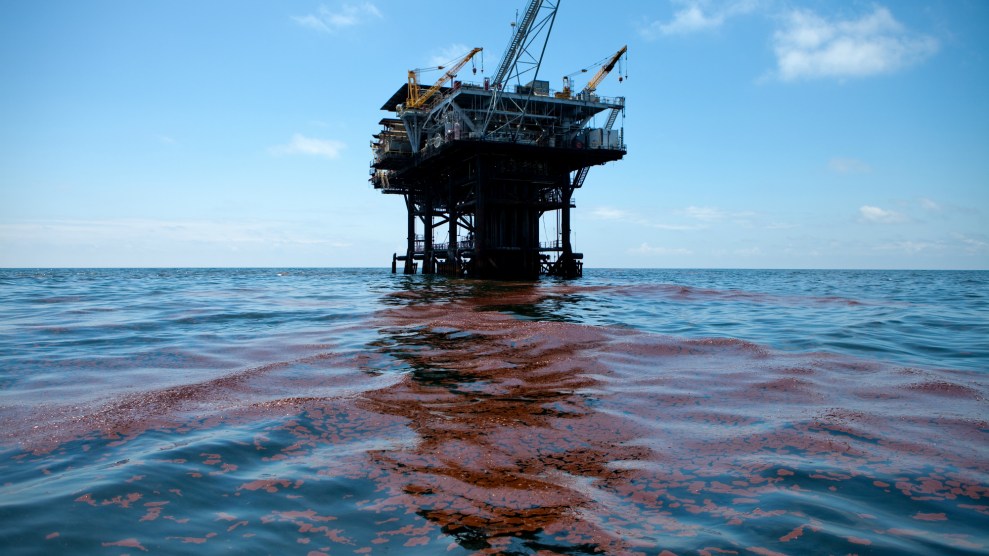 Oil from the BP oil spill is seen on the surface of the Gulf of Mexico.Julie Dermansky/Corbis/Getty

Nine years ago, I traveled down to the bustling Louisiana bayou fishing town of Venice, where the road south along the Mississippi River comes to an end. I joined colleagues from the Natural Resources Defense Council, a national environmental policy group, to investigate the blowout of the titanic Deepwater Horizon rig some 40 miles offshore. The bayou area had turned into a veritable war zone as an army of Coast Guard, National Guard, state police, and oil cleanup personnel converged to address the fallout from the massive rig explosion that killed 11 workers and busted a drilling pipe a mile below the surface, allowing 200 million gallons of reddish-brown crude to spew into the sea.

I can remember riding offshore with local fishermen and seeing their expressions turn from curiosity to fear as we found the thick, nauseating slicks floating toward shore. They realized their livelihoods would be turned upside down by the powerful explosion. It was America’s greatest oil spill disaster, a catastrophe that left a tarry trail of toxic oil and dead marine life across four states. And for many people who live in the region, the calamity is still not over.

Jorey Danos is one of them. A construction worker from the Louisiana town of Thibodeaux, Danos worked on the armadas of small boats—the Vessels of Opportunity—paid to help clean up the seemingly unending waves of crude. Above them, transport planes flew, spraying thousands of gallons of Corexit, a chemical oil dispersant designed to break up floating oil patches and sink them into the sea, so they would not pollute the marshes and shorelines. Danos says the planes sometimes flew near his boat, their mist making it hard to breathe. He says he was not issued a respirator. Boils broke out on his neck and he developed headaches. Eventually he suffered from seizures that forced him to stop work.

Danos is one of thousands of workers and residents who reported health complications following exposure to dispersants during the Deepwater Horizon cleanup. Yet, in the decade since the oil spill, government agencies have set no major rules governing the use of the toxic chemicals. And with President Trump rolling back drilling safety regulations and pushing for new drilling in areas like the East Coast and the Arctic, the matter has taken on new urgency: The next big oil spill may be just around the corner.

We know far more about the dispersants now than we did in 2010. At the time, very little effectiveness and safety testing had been conducted on the oil cleanup chemicals. Reports circulated that Corexit was as safe as Dawn dish soap and that its ingredients, initially kept secret by the manufacturer, Nalco Holdings, were also found in ice-cream and toothpaste. “We believe Corexit 9500 is very safe,” a Nalco chemist insisted after the blowout happened. BP agreed. It even bought a third of the global Corexit supply at the time.

But experts knew dispersants contained toxic ingredients. EPA regulators grew concerned that the Corexit spray might put first responders and residents at risk. The agency ordered BP to switch to a less toxic dispersant early in the spill, but BP resisted, saying the chemicals were an effective way to fight the growing oil disaster. EPA ultimately backed down as more oil poured ashore, a conclusion that then EPA Administrator Lisa Jackson called one of the “toughest decisions” she ever made.

For good reason. By the time the blowout stopped three months later, BP had released an unprecedented amount of chemical dispersant into the Gulf. Close to two million gallons of Corexitwere sprayed on top of mile-long oil slicks and—for the first time—below the sea into the wellhead. It was a never-before-tried attempt to prevent oil from washing into the pristine marshes and public beaches, one that involved tradeoffs for organisms that live or feed on the seafloor and for the workers involved in the cleanup.

I, too, was inadvertently sprayed by a plane trailing droplets of dispersants near a Venice marina, an invisible mist that felt like stinging nettles on my skin. More than a month after BP capped the Deepwater Horizon well and claimed it had stopped spraying dispersants, I reported on a cache of Corexit containers stored by an Alabama public dock that locals said was still being used to spray on oil patches close to shore.

Today, the science on the health effects of dispersants is catching up. A 2013 study found that Corexit made oil 52-times more toxic to certain marine life. In 2017, a landmark National Institutes of Environmental Health Sciences study of tens of thousands of oil cleanup workers found that those exposed to dispersants had increased risks of symptoms like coughing, wheezing, and burning eyes and lungs. A 2018 Johns Hopkins study found that oil dispersants increased the concentration of ultrafine particles, which can travel miles through the air and penetrate human lungs. And last year a Coast Guard study, based on self-reporting from 4,800 service personnel, found a relationship between increased exposure to dispersants and the likelihood of symptoms including coughing and shortness of breath. “There’s clearly something going on with acute symptoms,” says Jennifer Rusiecki, an epidemiologist who’s been studying data from sickened Coast Guard personnel. “The longer-term effects we don’t know yet.”

In April, however, a panel of the National Academy of Sciences (NAS) that included industry scientists weighed in with a new report, downplaying previous studies that had found detrimental health and environmental effects. The report stated that dispersants can be a “useful tool for oil spill response.” But it also noted that oil spill studies focusing on human health were “surprisingly” just beginning, and that future oil spills need better health monitoring and testing protocols to protect cleanup workers and residents.

Many say there is plenty of evidence to act now. In March, the UC Berkley Environmental Law Clinic announced that it intended to sue the EPA on behalf of a number of grassroots groups for failing to update oil and dispersant regulations. The agency had planned to overhaul testing requirements for dispersants in 2015, but delays plagued the program, and it now estimates that it won’t have new guidelines in place at least until 2021. Given the Trump administration’s plans for increased offshore drilling and safety regulation cutbacks, that may be too late for the next oil spill.

Shanna Devine, a Public Citizen worker health and safety advocate spent years investigating oil dispersants for the Government Accountability Project (GAP), and she summed up the problem in Congressional testimony in March. “Nearly a decade after the BP disaster, we have mounting evidence on the health impacts of dispersants on workers and exposed communities, and yet no action by the government to ban their use in US disaster responses.”

Meanwhile, workers like Jorey Danos, who submitted an affidavit to the GAP, continue to feel the sting of dispersants. Danos now receives disability payments and says his family life has been destroyed by headaches, memory problems, and seizures that plague him day and night. He relies on friends and family for help, but says he’s received no compensation from BP. “Out of sight, out of mind,” is how he describes the company’s attitude toward him and others suffering from chemical dispersant exposure.

More than nine years after the greatest oil spill disaster in US history, many of the safety regulations put in place after the horrific BP disaster are at risk. We can’t let the oil industry write the rules. It’s time for agencies to put public health over industry profits and protect coastal residents and the people who fight oil spills in the future.