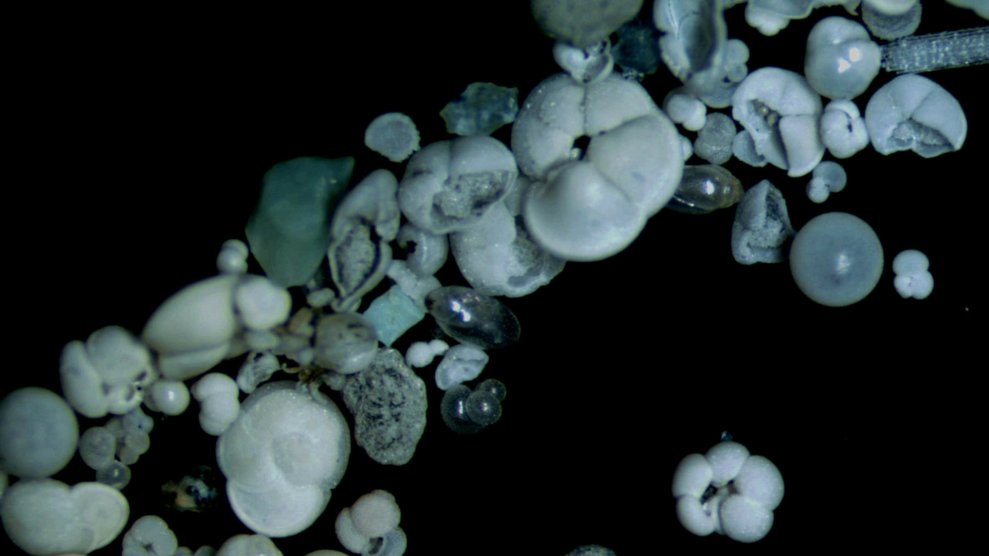 oraminifera samples drilled from the seafloor of the South China Sea are seen under a microscope.Xinhua/Zhang Jiansong/Getty

Plankton don’t get nearly the respect they deserve. These tiny organisms (phytoplankton being plant-like cells that produce much of the world’s oxygen, zooplankton being little animals) float around at the mercy of currents and form the very foundation of the ocean food web. You like whales? They eat krill, which eat, wait for it, plankton. You like your climate? Phytoplankton soak up CO2 and spit out oxygen, helping keep the planet a pleasant human habitat. So even if you don’t care about whales, at the very least you should care about breathing and not boiling alive (just yet): Life on Earth shares its fate with the littlest organisms in the sea.

But plankton don’t do well in warmer waters, which carry fewer nutrients. One study has shown that phytoplankton alone have declined by 40 percent since 1950. Getting a handle on how climate change is affecting other plankton counts, though, has been tricky. Because plankton are generally soft-bodied organisms, they quickly rot away when they die, making it hard to know what their populations were like in centuries past.

That is, save for a group known as the foraminifera (aka forams), hard-shelled organisms that look like Dippin’ Dots. Around 40 of the 4,000 species of foram are planktonic, drifting or floating through life. (The rest live on the bottom of the sea.) When they die, they settle into seafloor sediment, and stay there for scientists to find. And guess what: The forams are also suffering through ecological chaos. By analyzing previously collected sediment samples from over 3,500 sites around the world’s oceans, researchers have shown that plankton communities are rapidly transforming under the weight of warming seas, potentially spelling trouble for all manner of marine life and the health of the planet at large. The findings were reported in the journal Nature today.

The convenient thing about the seafloor is that sediment accumulates very, very slowly, so you don’t have to dig far to go way back in time. “One centimeter represents a couple of centuries, maybe up to a millennium of time,” says study lead author and micropaleontologist Lukas Jonkers of the University of Bremen in Germany.

The researchers used the sediment samples to get a sense of the ecosystem before we began transforming the planet with the Industrial Revolution. They then compared these multispecies foram communities with samples taken in present-day oceans with sediment traps—essentially big funnels that grab organic matter falling to the seafloor.

The differences were dramatic, with foram species that prefer warm waters generally increasing in numbers. The researchers then asked where in the world you would find a historical foram community similar to what you now find in modern sediment traps. “We found always that the preindustrial counterpart, or analog, was in an area that was warmer than where the sediment trap was,” says Jonkers.

Struggling to adapt to rapidly warming oceans, foram communities are shifting north and south, with a median displacement of 375 miles. In one extreme case, a community had shifted more than 1,500 miles. “Now the modern communities are displaced further toward the poles, which is consistent, of course, with a warming world,” he says.

“I think this is the first real demonstration that we have pushed plankton communities into a totally different state.”

“I think this is the first real demonstration that we have pushed plankton communities into a totally different state,” adds Jonkers. “We knew they were changing, but we didn’t know to what degree they had already changed. That’s the novelty of our study, just demonstrating that they’re now different from before the Anthropocene.”

Several scary implications come up here. One is that forams’ struggles could be indicative of the plight of other planktonic species. “What’s happening in foraminifera is probably happening in the entire plankton community,” says Catherine Davis, a paleo-oceanographer who studies foraminifera, but who wasn’t involved in this new work. “And because the plankton community is really the base of the food web, any change of what’s going on will be expected to really impact the entire ecosystem that relies on them.” This is particularly concerning in the case of phytoplankton, which each year transfer 10 gigatonnes of carbon from the atmosphere to the ocean depths when they die and sink.

Another concern is how quickly this is all happening. Climate change is nothing new—temperatures have fluctuated naturally over Earth’s history. But it’s the rate at which human-made climate change is unfolding that’s alarming. A species might be able to adapt to change that comes slowly, but what’s happening now may be overwhelming.

Even if warming oceans don’t have a very big physiological impact on a species itself, climate change could still affect the organisms it interacts with. So the speed with which all these pieces of the puzzle are coming together is a major consideration. “Will prey move more quickly than the predator does, [and] then what does the predator do?” asks Katie Matthews, chief scientist at the conservation group Oceana. “Does it starve? Does the population get smaller? The big question is, are these different pieces moving at different speeds?”

Further complicating matters is that the ocean itself is fragmenting as it warms: Warm water tends to sit on top of cooler water, creating essentially distinct habitats. “So you get this sort of hot, probably less nutrient-rich water that makes it a less productive place,” says Matthews. How that affects the interactions of species is not yet clear. “That’s another big scary question mark in this oceans and climate conversation.”

What this new study does make clear is that plankton communities haven’t just been transforming as of late—they’ve deviated wildly from the historic norm, before we humans kicked off the Industrial Revolution. Which is increasingly looking like one of the worst things to ever happen to this planet.