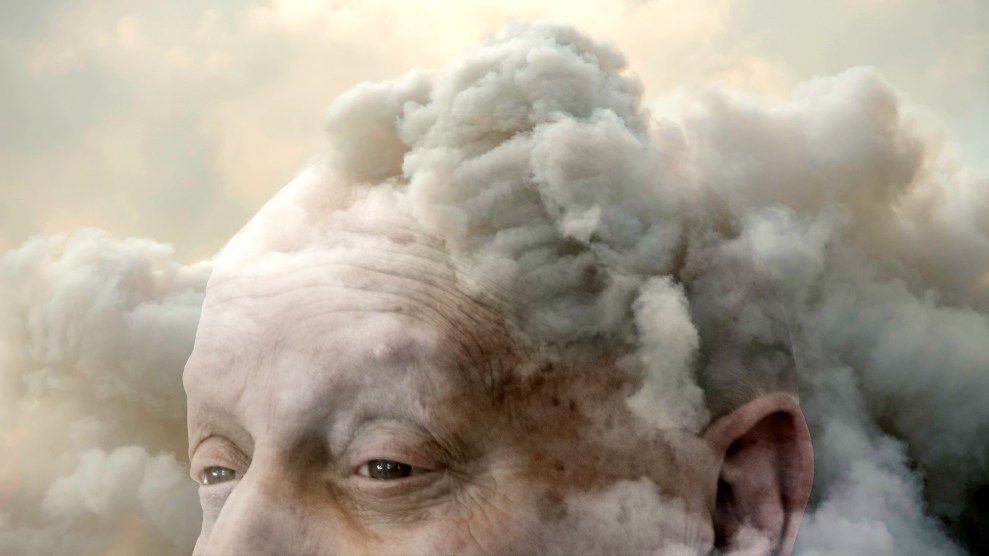 A few years ago I stood in a cramped trailer beside the busy 110 freeway in Los Angeles as researchers at the University of Southern California gathered soot thrown off by vehicles pounding by just a few yards from their instruments, which rattled whenever a heavy truck passed. I was there to learn about how scientists were beginning to link air pollution—from power plants, motor vehicles, forest fires, you name it—to one of the least understood and most frightening of illnesses: dementia.

“I have no hesitation whatsoever to say that air pollution causes dementia,” said one leading researcher.

At that time, as I reported in Mother Jones, the research implicating air pollution as one factor that can contribute to dementia was alarming, consistent, and, ultimately, “suggestive.” Since then scientists have published a wave of studies that reveal that air pollution is much worse for us than we had previously imagined.  The evidence is so compelling, in fact, that many leading researchers now believe it’s conclusive. “I have no hesitation whatsoever to say that air pollution causes dementia,” says Caleb Finch, gerontologist and the leader of USC’s Air Pollution and Brain Disease research network, which has completed many of these new studies. In terms of its effects on our health and welfare, Finch says, “air pollution is just as bad as cigarette smoke.” This evidence arrives alongside the alarming news that air quality is actually worsening for many cities in the United States, while the Trump Administration continues its effort to delay or roll-back environmental safeguards.

What makes Finch—and the half dozen other researchers I talked to—so sure? Of all the new research, three studies in particular paint a stark picture of the extent to which the quality of our air can determine whether we will age with our minds intact. In one from 2018, researchers followed 130,000 older adults living in London for several years. Those exposed to higher levels of air pollutants, particularly nitrogen dioxide and fine particulate matter released by fossil fuel combustion, were significantly more likely to develop Alzheimer’s disease—the most common kind of dementia—than their otherwise demographically matched peers. In total, Londoners exposed to the highest levels of air pollution were about one and a half times more likely to develop Alzheimer’s across the study period than their neighbors exposed to the lowest levels—a replication of previous findings from Taiwan, where air pollution levels are much higher.

Another, a 2017 study published in the Lancet, followed all adults living in Ontario (roughly 6 and a half million people) for over a decade and found that those who lived closer to major high-traffic roads were significantly more likely to develop Alzheimer’s disease across the study period regardless of their health at baseline or socioeconomic status. Both of these studies estimated that around 6 to 7 percent of all dementia cases in their samples could be attributed to air pollution exposures.

Those studies from Canada and the UK are certainly intriguing. But the most compelling, and least reported on, study comes from the United States. It was also, incidentally, inspired by our previous reporting.

Following our early report on the link between air pollution and dementia, three economists at Arizona State University—Kelly Bishop, Nicolai Kuminoff, and Jonathan Ketcham—decided to pursue a large-scale investigation of the issue. “We found the Mother Jones article compelling,” Ketcham says. “It was informative about the plausible pathways and the need for more rigorous studies that could test causality.”

Ultimately, Bishop, Kuminoff, and Ketcham decided to link EPA air quality data to fifteen years of Medicare records for 6.9 million Americans over the age of 65. Rather than simply ask if Americans exposed to more air pollution developed dementia at higher rates, the team identified a quasi-natural experiment that arbitrarily separated Americans into higher and lower air pollution exposure groups. In 2005, the US Environmental Protection Agency targeted 132 counties in 21 states for increased regulation because they were found to be in violation of new air quality standards for fine particulate matter pollution. Residents of those counties consequently saw their air quality improve at a faster rate than their demographically matched peers living in other counties who, initially, had equal exposures but lived in counties with pollution levels that just barely fell below the new air quality standards.

This quirk of different standards across the country allowed the researchers to ask if a manipulated decrease in air pollution exposure actually led to fewer cases of dementia, from Alzheimer’s or other dementing diseases, like strokes. This overcame a significant limitation of the other existing studies, which could only compare differences in exposure and disease arising “naturally” among people who lived in different places rather than by a planned intervention. “If people who have lower levels of education, who are less wealthy, and who are less healthy for reasons that we can’t observe end up living in more polluted areas,” says Ketcham, “it’s difficult to say which of those factors could have led to disease.”

As they reported in the National Bureau of Economic Research last year, Bishop, Kuminoff, and Ketcham determined that air pollution could indeed cause dementia, specifically Alzheimer’s dementia. In counties that had to quickly comply with the new air quality standards, older people developed Alzheimer’s at lower rates than their peers in counties where the new rules didn’t apply. Annual exposure to an average of one more microgram of fine particle pollution per cubic meter of air (an amount well within the range of difference you could see if you moved from a clean neighborhood to a more polluted neighborhood) raised the typical US elder’s risk of dementia as if they had aged 2.7 additional years. The authors estimated that the size of this elevated risk approached that of other well-known dementia drivers, including hypertension and heart disease.

All told, Ketcham says, enforcing the EPA’s stricter air quality standard likely resulted in 140,000 fewer people living with dementia by 2014. He places the economic value of that avoided disease burden at around $163 billion.

Researchers now better understand what happens in the brain when you breathe polluted air—and how that can lead to neurodegeneration years later. When you inhale pollutants, the smallest particles, emitted by cars, power plants, and other places where fuel is burned, lodge in your lungs’ sensitive tissue or else pass into your blood stream. In those places they trigger an immune response that seeks to trap, contain, and remove the invading particles. In time that response generalizes to what we call “systemic inflammation,” or an over-active, overly excited immune response across the body.

Systemic inflammation appears to be the primary way that air pollution harms the brain, says Caleb Finch. In early 2017 Finch and his colleagues showed that inflammation following air pollution exposure leads to the formation of Alzheimer’s plaques in the brains of mice genetically altered to develop Alzheimer’s pathology. “That was impressive,” says George Martin, Director Emeritus of the University of Washington’s Alzheimer’s Disease Research Center, who was not involved in the study. Because of that study, and others like it, Martin now believes that air pollution could be one potential cause of dementia, although he wants more evidence on the mechanisms, “and, ideally, on a specific component or components of air pollution.”

In the coming years, these new findings could shape scientists’ understanding of neurodegenerative disease. Because of these new studies, says George Perry, Chief Scientist of the Brain Health Consortium at the University of Texas at San Antonio and Editor-in-Chief of the Journal of Alzheimer’s Disease, “my view of Alzheimer’s is changing, and I think the field is changing with it.” Perry now believes that air pollution is a potential risk factor for dementia, and his Alzheimer’s journal will soon run a special issue devoted to the link between the two. Motivated, in part, by the new evidence, Perry also increasingly sees dementia as a disease like cancer, where multiple factors could lead to pathology. “People develop cancer without smoking or being exposed to air pollution,” he says, “But each of those will raise your risk.”

Unlike with smoking, we can’t always know when we are being exposed to dirty air, and we can’t decide when to quit. Yet Arizona State’s Kuminoff firmly believes that we could avoid more dementia by strengthening our existing air pollution standards. If there is a safe level of exposure, he says, “We haven’t gotten there yet.”