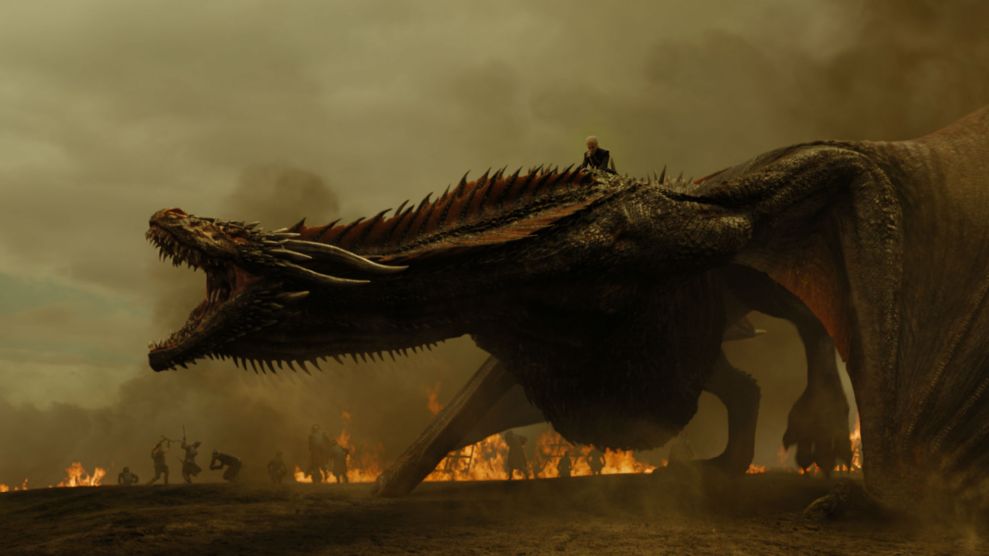 Warning: This post contains lots of Game of Thrones spoilers.

In Game of Thrones‘ first season, Daenerys Targaryen walks into a pyre, yet emerges hours later naked and unharmed, three baby dragons at her side. From there on, she and her dragons are an unstoppable force in the show’s universe. But the magical fire-breathing beasts and their mother took a turn for the dark side in the series’ penultimate episode, “The Bells,” in which the former hero went from scorching slave owners and taking on the undead to literally burning down the house (or as it were, many any houses—and humans) in King’s Landing. It was alarming to watch, and many fans took to Twitter to express their dismay with Daenerys’ abrupt transformation from the “breaker of chains” to the breaker of, well, everything.

But in all the outrage over Daenerys’ character arc, another Westerosi catastrophe has largely gone unnoticed: The dragons themselves.

Don’t get me wrong, I like CGI dragons as much as the next gal, but as episode five clearly indicated, dragons are a serious threat to the world around them. Simply put, they’re an ecological nightmare that has largely been ignored even while people have long wondered if the show itself is a metaphor for addressing the impacts of climate change.

“The dragons are certainly not native to Westeros. In that particular world, they are an invasive species,” says Helen Keen, a pop culture science writer and author of The Science of Game of Thrones: From the Genetics of Royal Incest to the Chemistry of Death by Molten Gold—Sifting Fact From Fantasy in the Seven Kingdoms. “It’s like one civilization suddenly developing the Air Force or something, and nobody else can keep up.”

Here, Mother Jones investigates how Dany’s babies may be wrecking the Westerosi world:

According to Daenerys, her dragons eat an all-meat diet consisting of “whatever they want,” in massive amounts. And at one point ahead of the Battle of Winterfell, Daenerys learns her dragons only ate “18 goats and 11 sheep” in a day, an upsettingly low amount for their mother. If that’s the combined diet for two dragons, that means each dragon ate nine goats and approximately five and a half sheep.

According to David Steen, a researcher focusing on reptiles at the Georgia Sea Turtle Center, that’s unusual. Reptiles are generally ectothermic, meaning they rely on the external environment to regulate their internal body temperature, and therefore have a relatively slow metabolism and can go long stretches without eating.

“They don’t tend to eat as much as we do or other mammals and birds. So to eat two dozen domestic livestock in one day would be really unusual,” Steen says. “That leads me to wonder if perhaps the dragons are either overeating or maybe they’re actually endothermic like we are.”

Given what we know from the show, let’s assume the dragons’ typical diet is at least twice as much they ate ahead of the Battle of Winterfell, and they eat at least every third day. If that’s the case, a dragon the size of Drogon or Rhaegal would need to consume the equivalent of 2,196 goats and 1,342 sheep per year. And that’s just for one dragon. Daenerys isn’t farming those sheep and goats herself; her dragons are feeding at the expense of the poor farmers and ranchers of Westeros.

In some cases, fire can be employed to manage forests and restore ecosystems. But if a fire gets out of control, as we saw recently in California, it can be a disaster. Both King’s Landing and Winterfell are located near forests, according to HBO’s official map, and both were the site of major battles relying on dragon firepower.

“Dragons seem to have an almost limitless supply of fire,” says Keen. “Equally, the risk of them just setting fire to dry grasslands is probably limitless as well.”

It’s miraculous Daenerys didn’t inadvertently start a wildfire. And, honestly, thank God. Because, who is around to stop those fires? And with what water infrastructure?

The big professions in Westeros seemingly include wannabe kings and queens, soldiers, slaves, and prostitutes—not firefighters. If Daenerys wins the Iron Throne and her last-remaining dragon survives, she may consider investing in some fire stations.

While climate change isn’t acting directly in the Game of Thrones universe (that we know of), it’s worth noting that dragons likely emit greenhouse gasses when they breathe fire. It’s not totally clear how dragons’ fire breath is produced, but as one fan theory goes, according to Keen, dragons may have a supply of gas inside them that they ignite, giving them their ability to breathe fire (and acting as a buoyancy aid to help them fly).

If that gas is like the natural gas we have on Earth, its combustion would likely release carbon dioxide. There’s some science to back my theory up: According to Game of Thrones Wiki, aka, the internet, dragon’s fire is hot enough to melt steel, which has a melting point of around 2,700 degrees Fahrenheit. That’s well within the burning temperature range of natural gas.

On top of that, the dragons’ incineration of organic material—trees, houses, innocent humans—would also release large plumes of carbon dioxide. Just think of the greenhouse gas emitted from the burning of King’s Landing alone!

Fully grown, Daenerys’ dragons are each about as big as a commercial aircraft, according to what one Game of Thrones director, Matt Shakman, told Entertainment Weekly. That’s about twice as big as Earth’s largest animal today, the blue whale.

Some say their size should make them too heavy to fly: “They’re just so damn big,” Kevin McGowan, a Cornell ornithologist told Mental Floss in 2017. “Way too big to ever get off the ground.” The point is, they’re heavy. And if those big boys are hanging around on farms, where the goats and sheep are, their weight could cause some serious soil compaction. That may not sound too threatening, but according to the USDA, soil compaction can reduce plant growth and root penetration, and restrict water and air movement in the soil, resulting in a drop in crop yields by up to a whopping 50 percent.

Heading into the season finale, several unanswered questions remain: Who will finally win the Game of Thrones? What does the white horse mean? And are Jon and Daenerys still together? But it’s unlikely the creators will address, arguably, the most pressing of them all: What happens to all that dragon poop?

It’s hard to say exactly, but if an animal’s poop is approximately as long as its rectum, a dragon’s excrement could measure at least several feet long. Sure, that much nutrient-rich material may make great fertilizer. But it could also be dangerous: If Drogon has to go while he’s airborne, Westeros may witness an entirely new kind of shitstorm. (I know, I know.)

“If a dragon is flying by, you’d probably want to take shelter or go inside just to avoid getting splattered,” says Steen.

My conclusion from all this: Despite their clear cultural importance to the Targaryens, the risks of keeping around a fire-breathing weapon of mass destruction significantly outweigh the benefits. And their imminent extinction, I say, may be somewhat of a blessing.