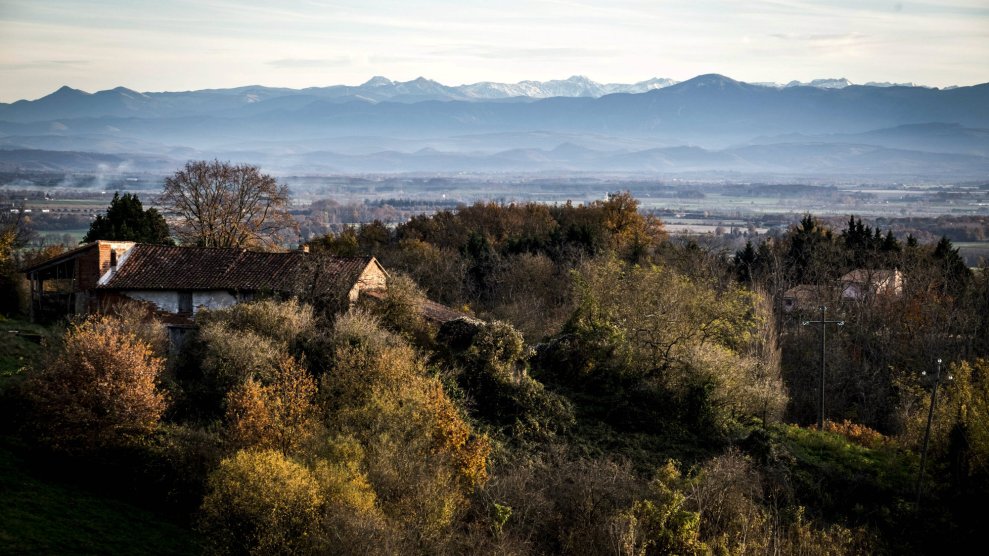 At the top of the French Pyrenees, not far from the border with Spain, is a virtually pristine clearing, home to snow and a weather station—but mostly feet upon feet of snow. The nearest road closes in the winter. The most substantial town within 60 miles tallies just 9,000 people.

Look closely at the landscape, though, and you’ll see the place is covered in plastic. Between November 2017 and March 2018, researchers gathered water from the weather station’s collectors and searched for microplastics—bits less than a fifth of an inch long—and discovered that 365 particles land on every square meter each day. The source? Likely winds blowing from big cities like Barcelona, 100 miles to the south.

With the discovery, the researchers have revealed a new horror of plastic pollution. Scientists already knew that microplastics can hang in the air of big cities like Paris and Dongguan, China, but no one has yet shown just how far these things can travel. This work was a short-term pilot study that demands further investigation from other researchers, but the implications are shocking—for supposedly pristine environments the world over, for ecosystems, and for human health.

The central problem when it comes to plastic, as we’ve all heard, is that the stuff takes a thousand or so years to decompose, bouncing around the environment in the meantime. And when something like a plastic bottle decomposes, it sloughs off tiny bits of itself, microplastics that then make their way into organisms. This is a particular problem in the sea, which has been fairly well studied: One survey found that mussels sampled around the UK all had microplastics in them.

Less well understood at this point is how different plastic types—the researchers found a range in their samples, from polystyrene to polyethylene to polypropylene—travel through the atmosphere differently based on their material properties. Also poorly understood is how the shape of a microplastic, whether it be more of a film or fiber or fragment, affects its movement. You might assume a film with more surface area would travel farther than a fragment, but that just hasn’t been tested.

“What they showed was that within 6 hours these nanoparticles are marching through the animal. They’re in every part of the animal in 6 hours.”

“That’s one of the challenges moving forward is trying to actually model how these plastics move in 3D in the air, so we can figure out where they come from,” says environmental pollution scientist Deonie Allen of the EcoLab, part of the National Center of Scientific Research for France, coauthor on a new paper in Nature Geoscience.

To a certain degree, perhaps it isn’t too surprising that the researchers found microplastics here in the Pyrenees, because in their sampling they came across another important clue: a fine orange dust. This probably blew in from the Sahara, a phenomenon this monitoring station has recorded for over a century. (More incredible still, dust from the Sahara also crosses the Atlantic to fertilize the rainforests of South America.)

“The winds don’t make a distinction between the type of the particles,” says marine geologist Michèlle van der Does, who has studied the long-range transport of dust particles, but who wasn’t involved in this new work. “These plastic particles are much bigger than the dust particles we find, although we find these giant dust particles as well. But their density is much lower, so they’re also more easily transported over great distances.”

Another consideration is the unique nature of plastic decomposition. As microplastics break apart, theoretically their properties would change. So a single fiber might break into two fibers, creating new pieces with new aerodynamics. As they break down further, microplastics eventually become something even more sinister: the nanoplastic, a piece smaller than a micron, or a millionth of a meter.

These vanishingly small bits of plastic can get just about anywhere, including throughout an organism’s tissues, as researchers found when they introduced nanoplastics to scallops. “What they showed was that within 6 hours these nanoparticles are marching through the animal,” says study coauthor Steve Allen, an environmental pollution scientist at the University of Strathclyde and EcoLab (and spouse of Deonie Allen). “They’re in every part of the animal in 6 hours.”

It’s not just the plastic itself that organisms have to worry about. “We do know that these plastics absorb all of the chemicals they pass through in the environment, like pesticides,” Steve Allen says. “We also know they have heavy metals sticking to them. So if these particles pass into your lungs and carry those chemicals in there, we don’t know what’s going to happen there yet either.”

Even more concerning: Nanoplastics look a lot like the nanoparticles used in medicine to deliver drugs in the human body. “So they can go through the blood-brain barrier potentially in exactly the same way but carrying their toxins,” Deonie Allen says. “And this is really worrying.” To be clear, though, this idea has not been backed up with data.

Researchers have, however, explored another troubling characteristic of plastic in the oceans. “In some ecosystems like coral reefs, plastics work as disease vectors,” says Luiz Rocha, curator of fishes at the California Academy of Sciences, who wasn’t involved in this study. “So a piece of plastic is like a little petri dish for all kinds of bacteria, including pathogens. As they go along the reef, they touch one coral and another coral and they transmit the disease.”

Whether microplastics could act as disease vectors on land is yet another question that demands more research. But it’s important to keep in mind that the microplastic and nanoplastic problem isn’t a land-sea dichotomy. Plastic’s effect on sea creatures has been much more thoroughly studied than its effects on land creatures like us, but there’s also quite a bit of interplay between the two environments.

Take laundry, for instance. Washing clothing like yoga pants and fleeces can release hundreds of thousands of synthetic fibers per wash cycle into the environment. “They don’t get completely removed by the filters, they don’t get completely removed by the wastewater treatment plants,” says University of Aveiro analytical chemist João Pinto da Costa, who has studied plastics in the environment but who wasn’t involved in this new research. The fibers end up in rivers and seas, but also in sediments, where they dry out and get picked up by the wind. “Also, when you’re just putting your clothes up to dry, it’s easy to imagine that a lot of fibers will be transported in the wind.”

This presents us with an astoundingly complex problem. Plastics have made the world an undoubtedly safer and healthier place—imagine what medicine alone would be like without the technology. But the scale with which plastics are contaminating this planet and its lifeforms is growing ever clearer. Even if your country decides to ban all single-use plastic bags, your neighbors might still churn them out and, if this developing model of airborne contamination holds true, the resulting microplastics could blow your way. In that sense it’s not so different from climate change: Either we all tackle it together, or we risk getting nowhere.

“It means that it’s everybody’s problem,” Deonie Allen says. “But it also means that if you think of the amount of pollution there is in places like China, where they go around wearing masks, that is something we could potentially be facing because we aren’t managing our plastic. That’s quite scary and it might motivate people to do something.”

It’s worth noting again that this was a small pilot study. But it’s also worth noting that part of the reason for that was the researchers were so alarmed by the findings, they wanted to get the word out quickly so the scientific community could investigate further how microplastics are blowing around Earth.