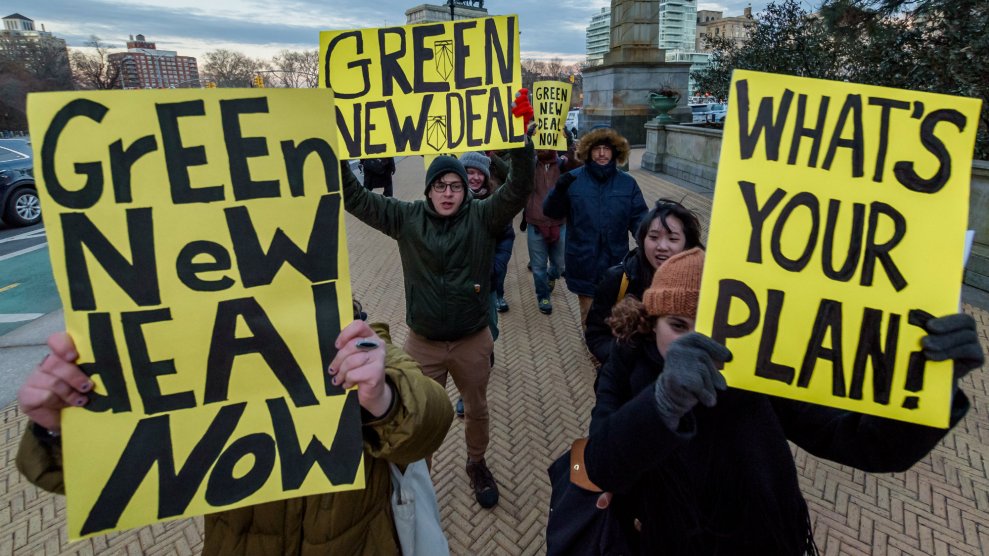 Ever since then-representative-elect Alexandria Ocasio-Cortez (D-N.Y.) joined a demonstration pushing for a Green New Deal last year, politicians, pundits, and activists have debated the proposal’s ambitious goals for addressing climate change. In early February, Ocasio-Cortez and Sen. Ed Markey (D-Mass.) introduced a resolution laying out a framework for the proposed program, which includes a commitment to renewable energy, investments in infrastructure and energy-efficient buildings, guaranteed jobs with living wages, and paid family and medical leave.

Though the resolution garnered the support of more than 60 House members, as well as senators Bernie Sanders (I-Vt.), Elizabeth Warren (D-Mass.), and Kamala Harris (D-Calif.), among others, it’s also attracted its fair share of critics who charge that it is costly and attempts to do too much. It’s also unclear how much support the proposal has among Democratic leadership in the Senate, evidenced by a recent viral video of Sen. Dianne Feinstein (D-Calif.) explaining her reasons for not supporting the measure and telling students that it would not pass. Senate Democrats, led by Tom Carper (D-Del.) and Chuck Schumer (D-N.Y.), also introduced their own version of a climate resolution Thursday as an alternative to Ocasio and Markey’s proposal.

Still, the Green New Deal has become a rallying cry for many climate activists, including the youth-led Sunrise Movement, which held a protest at Sen. Mitch McConnell’s office on Monday. And a poll from Data for Progress, a think tank that supports the policy, found that a majority of likely 2020 voters supported key aspects of the Green New Deal.

As the conversation around this proposal continues, we want to help you understand the policy and the politics: What questions do you have about the Green New Deal? What do you want to know about some of the specifics? How will it work, for instance, and what are the realistic objectives? Let us know in the form below, send an email to talk@motherjones.com, or leave us a voicemail at (510) 519-MOJO.

We’ll compile some of the best questions, then ask you to vote on a winning one. Our climate reporters will report out the answer.