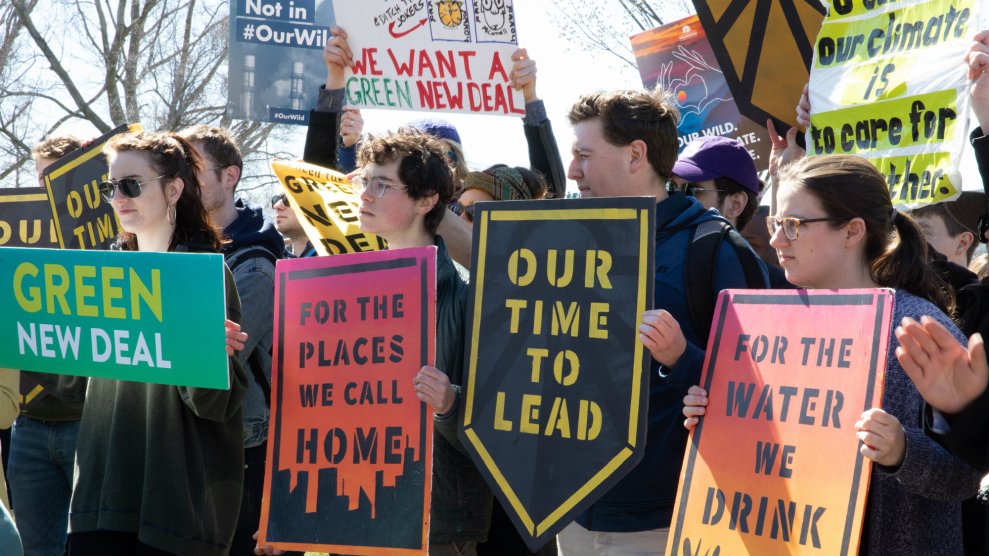 Imagine a Walmart semi-truck rolling down the interstate with its back doors open, plasma-screen televisions tumbling out onto the highway, crashing through windshields and causing chaos. “It would be ridiculous,” said Jonas Kron, a senior vice president for Trillium Asset Management, a socially responsible investment firm. Company ownership would demand better trucking practices, and the company would respond.

Methane leaking from oil and natural gas operations is the same sort of thing, Kron says—only on a multi-million dollar level that also contributes to climate change. That’s why his firm has pushed EOG Resources, the oil and gas company formerly known as Enron, to get a handle on their methane emissions.

Trillium’s efforts are part of a broader wave of concerned shareholders trying to use the tools of capitalism to hold fossil fuel companies accountable for climate change. But as climate action gains traction, an unexpected corner of the Trump administration is threatening the efforts of Trillium and other environmentally aware investors and shareholders.

Investor resistance has a long history. During the Vietnam War, activist shareholders pushed Dow Chemical Company to stop producing napalm, throughout the 1980s investors pressured companies to divest in apartheid South Africa, and last year shareholders impelled McDonald’s to ditch polystyrene foam packaging and Costco to limit antibiotics in the meat it sells.

Investors typically rely on three approaches to drive change: the carrot, the stick and the ax.

Investors typically rely on three approaches to drive change: the carrot, the stick and the ax. The carrot is a dialogue between shareholders and companies. For instance, if investors are worried that a company’s coal assets will diminish in value as other energy sources become cheaper and momentum for carbon-capping legislation increases, they can suggest ways the company can remain competitive.

If that doesn’t work, investors can turn to the metaphorical sticks—non-binding resolutions voted on at annual shareholder meetings pushing a company in a particular direction. Boston-based Trillium first used the stick on EOG in 2014, urging the company to monitor and mitigate methane leakage in its oil and gas operations, which range from southern Texas to North Dakota, and also extend around the world. Only 28 percent of shareholders voted for the resolution, but it got the ball rolling, and in late 2018 the company and Trillium reached an agreement on monitoring, reporting and mitigation programs for methane emissions.

That agreement occurred despite a major hurdle thrown up by the Trump administration last year, when, at EOG’s request, the Securities and Exchange Commission blocked Trillium’s resolution from going to a vote. Other such rulings followed. Last November, the shareholder advocacy group As You Sow filed resolutions pushing Wells Fargo and Goldman Sachs to align their investments with Paris Climate Agreement benchmarks for reducing greenhouse gas emissions. Both banking institutions fund fossil fuel projects and received failing grades in a Rainforest Action Network survey of the climate impacts of the banking industry.

The corporations resisted and appealed to the SEC, which shut down resolutions on the grounds that shareholders were trying to micro-manage operations by forcing companies to adhere to climate change targets. “In the past the SEC has recognized that shareholders should be able to raise these important issues,” said Danielle Fugere, the president of As You Sow. And Obama-era SEC rulings allowed similar shareholder resolutions to go forward. But since Trump took office, the SEC has consistently ruled in the corporations’ favor. In February, ExxonMobil asked the SEC to nix a climate-oriented shareholder resolution, and a ruling is pending.

From dismantling regulations to pushing oil and gas leases in previously protected habitat, the Trump administration has shown its allegiance to fossil fuel interests. By protecting corporate executives and boards from answering to investors for their climate impacts, the administration is making it as comfortable as possible for fossil fuel companies and their financiers to continue to sow climate chaos.

Nevertheless, as the EOG case demonstrates, even with the administration on their side, some corporations are bending to their shareholders’ will. Shareholder activism “isn’t the straw that is going to break the camel’s back,” when it comes to adapting to and mitigating climate change, said Kron. “But we’re trying to stack as many straws as possible on the camel.”