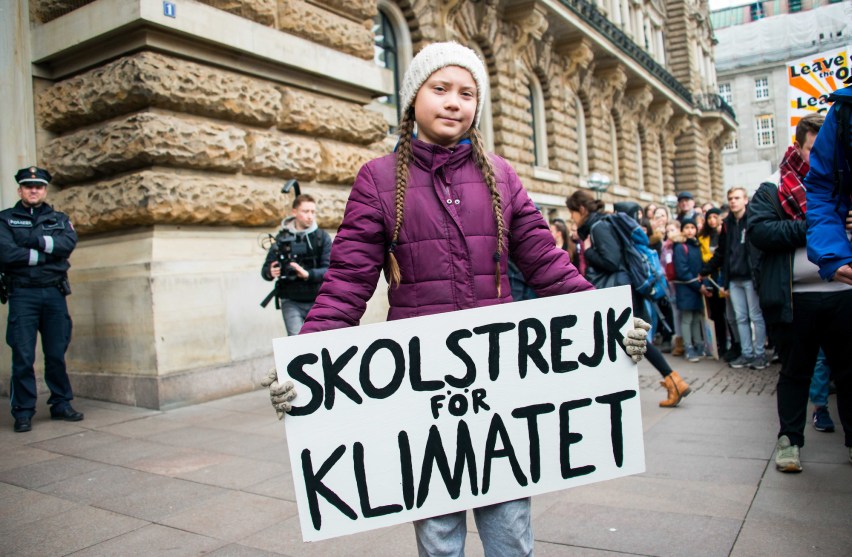 In 2040, Haven Coleman will be 33 years old. Having grown up in Colorado, she may have left the state to attend college or start her career, but wherever she goes will be a stunningly different world from the one she inhabits today.

The planet will have already warmed past one scary threshold—1.5 degrees Celsius above preindustrial averages—and will be fast approaching the even more frightening mark of 2 degrees Celsius, long considered a catastrophic marker by the global community. Even at 1.5 degrees, there will likely be tens of millions of climate refugees from regions that have become uninhabitable because of heat, flooding, or extreme weather. Fragile coral reefs may be nearly decimated, and recurrent flooding, excessive heat, and a constant risk of wildfires will pose an everyday threat to stability in some of the world’s biggest cities.

Not quite 13 years old, Coleman is painfully aware of what awaits her generation should there be continued government and social inaction in addressing the perils of a warming planet. “I’ve grown up with climate change,” Coleman told me. “I’ve grown up listening and hearing about climate change. I’m fighting for my future.”

She is one of the school-age protesters who will skip classes Friday to join protests in more than 1,600 school strikes across 100 countries. Students are joining in, inspired by the example of 16-year-old Greta Thunberg, a Swedish teenager who has been striking most Fridays since 2018 to demand political leaders’ attention. The hashtag #FridaysForFuture has caught on in other countries, like Australia, where 200 young people demonstrated in November.

In the United States, the movement, which is made up of mostly teenage girls, has expanded from a few lone protesters missing school on some Fridays to a nationwide, all-day Youth Climate Strike. Coleman teamed up with 16-year-old Isra Hirsi, the daughter of Minnesota Rep. Imar Oman, and 13-year-old Alexandria Villasenor of New York City. Their demands are for the United States to embrace the principles underlying the Green New Deal, provide better education on climate change, and connect all government decisions to scientific research.

These young people compose the first generation that bears little responsibility for the 410 parts per million concentration of carbon in the atmosphere, but will face most of the consequences from it. They’re coming of age when the window to ward off this nightmare scenario is rapidly shrinking. Many older adults have been warning for decades that “future generations” will suffer for our selfishness and inertia from continued inaction. Now, those so-called future victims are finding their voice to try and shape the agenda.

“Many of my younger peers in the climate change generation will literally outlive the climate projections that scientists run through 2100.”

“The climate change generation is a generation of young people born into a warming world, who will be alive to see which climate model scenario plays out, and who have spent—and will spend—essentially our entire adult lives fighting for a just and stable future,” says Geoffrey Supran, a postdoctoral fellow, scientist and activist who has organized to persuade Harvard and MIT to divest from fossil fuels. “Many of my younger peers in the climate change generation will literally outlive the climate projections that scientists run through 2100.”

The youngest activists in the US have found new entry points in the debate by joining the Sunrise Movement and demanding a Green New Deal. The Sunrise Movement is mostly comprised of millennial activists, a portion of whom, like Supran, learned the basics of organizing from the fossil fuel divestment movement on college campuses. Many of those 20-something organizers were concerned about climate change already, but found agency through concrete action like divestment.

Whether intuitively or from having witnessed and learned history, the younger activists understand that climate change encompasses not only the environment but also racial discrimination and economic inequality.

Even in the past, the environmental movement has been more expansive than other single-issue concerns, says Georgetown historian Michael Kazin, an expert in the radical left. He explains that in the sixties and seventies, environmentalism began as an anti-pollution movement that grew out of opposition to the Vietnam War and demands for a better quality of life. “What any movement needs to survive is infrastructure,” Kazin notes, “and to find through-lines to other issues people are about.”

Sunrise is one of the groups that is fast building up that infrastructure and has closely connected the climate fight to racial justice. Rose Strauss from Sunrise is a college freshman, who attended one of the group’s trainings last year and saw the need to recognize its growing number of activists at the high school level. Sunrise does not have hard numbers for its under-20 division, but counts 275 students who are active on their Slack channel. The group, working with a high school-focused climate group called iMatter, has been working to advance Green New Deal resolutions in places like Marin County, California, and Sante Fe, New Mexico. Having a vision, like the Green New Deal, to rally around has drawn new activists to their ranks.

“I’ve been trying to become active for a long time but there wasn’t a solution addressing the problem on the scale that needs to be addressed,” Strauss says. “Having a tangible solution like the Green New Deal to get behind puts a much more positive spin on it than ‘this is terrible we need to stop it.’ That kind of shift in messaging has got a lot more people involved.”

Climate activists across the generations are counting on these new messengers to bring more salience to their arguments. “Politicians and pundits have talked for decades about ‘our children and grandchildren’ who will face the perils of climate change,” Supran says. “But guess what: They’re here, they’re alive, they’re marching in the streets right now.”

Mother Jones is answering your questions about the Green New Deal, a resolution that proposes ambitious changes to climate policy. Vote on which question you want us to answer below.