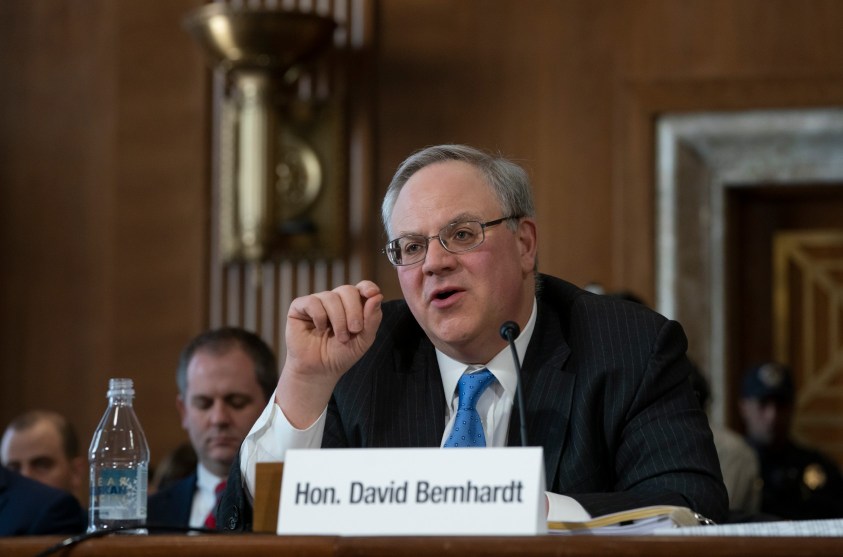 David Bernhardt, the nominee to serve as the next secretary of the Interior Department, was questioned about his ties to industry and accused of meddling with agency science during a confirmation hearing on Thursday, but managed to walk away from the rare public appearance relatively unscathed.

A longtime fossil fuel lobbyist, Bernhardt has served as acting agency chief since Ryan Zinke resigned as secretary earlier this year amid mounting ethics scandals. He told members of the Senate Energy and Natural Resources Committee that he had “fully complied” with all ethics rules and prioritized fixing the department’s ethics programs in order to “ingrain a culture of ethical compliance and reduce workplace misconduct.”

Democrats took the opportunity to zero in on Bernhardt’s long list of potential conflicts. He worked for eight years at the law firm Brownstein Hyatt Farber Schreck, where he lobbied on behalf of oil, gas, mining and agricultural interests. There are more than 20 former clients listed on his ethics recusal form.

Wyden referenced two separate media reports in recent days. An investigation by The New York Times surfaced public records showing that Bernhardt intervened to block a report by the Fish and Wildlife Service about the threat certain pesticides pose to more than 1,000 endangered species. And Reveal from The Center for Investigative Reporting reported on a private meeting of oil industry executives in June 2017, where two executives of the Independent Petroleum Association of America―one of Bernhardt’s former clients―boasted about their access to Bernhardt, who was then the appointee for the agency’s No. 2 position.

Wyden told Bernhardt that the documents obtained by the NYT suggest he “meddled with the science” and is “just another corrupt official.” Bernhardt swung back against the attack, saying that the report “is not even close to the actual story” and that he made a simple decision to send the federal agency’s report to career lawyers, who agreed with his assessment that there were legal concerns.

Sen. Cory Gardner (R-Colo.), who introduced the Colorado native as a man of integrity and well-qualified for the role, was among the Republicans that came to nominee’s defense.

“I understand that people are going to have differences of opinions,” he said. “But to attack the witnesses ― This is why good people don’t want to serve this country.”

Along with his lobbying career, Bernhardt previously served as a top Interior official under former President George W. Bush, when he led a failed attempt to open Alaska’s pristine Arctic National Wildlife Refuge to oil and gas development ― an effort now being pushed by the Trump administration. This revolving-door experience has earned Bernhardt labels like the “ultimate D.C. swamp creature.” His former lobbying clients have landed at least 70 meetings with high-ranking Interior officials since the Trump team took office, as HuffPost reported this week.

Demonstrators donning green swamp creature masks were seated behind Bernhardt during much Thursday’s hearing. But he faced only a few tough questions from Democrats.

Bernhardt is among several officials at the federal agency who have been accused of violating Trump’s ethics pledge, which bars political appointees in the executive branch from participating in certain matters involving former employers or clients for two years. It also prohibits former lobbyists from participating in any particular matters they lobbied on in the two years before being appointed.

Sen. Joe Manchin (W.Va.), the ranking Democrat on the committee, told Bernhardt “it is clear that you have the knowledge and experience to serve as secretary,” but that is only fair that his record be scrutinized given the enormous responsibility he would be entrusted with. Interior employs more than 70,000 people and manages 500 million acres of federal land — roughly one-fifth of the U.S. — including the 59 national parks.

Bernhardt’s two-year ethics pledge recusals expire in August. Manchin asked if he would consider extending those recusals in light of all the former industry clients he will be tasked with regulating. Bernhardt said he had given that a lot of thought and decided that doing so would leave him “handcuffed and not in the game for the American people.”

“I’m actually pretty good at going up against these guys,” he said of his former clients. “And I don’t have any problem doing that. I would say you want your A quarterback playing for your team.”