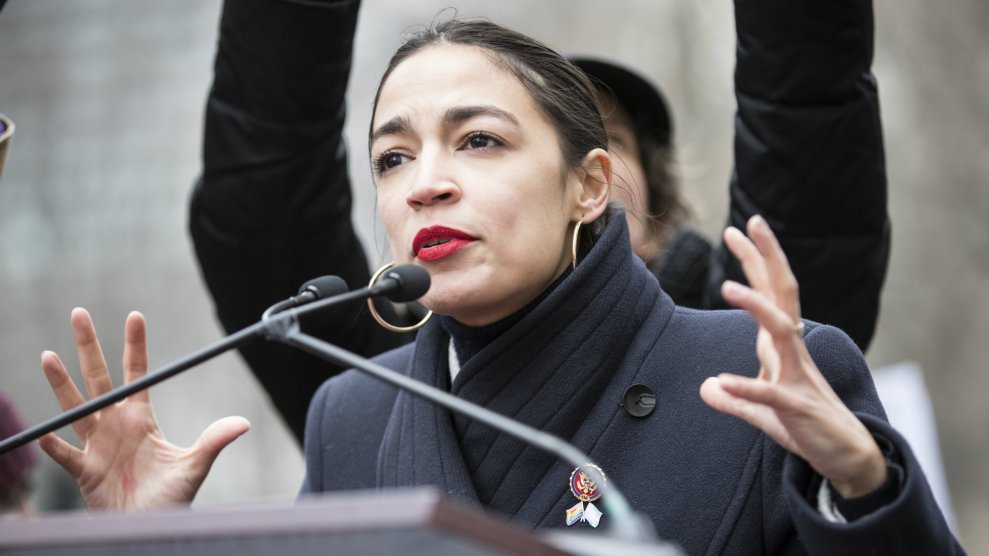 The resolution calls for the United States to “promote the international exchange of technology, expertise, products, funding and services with the aim to reclaim US leadership on climate change to help other countries achieve a Green New Deal,” multiple sources who have seen the document confirmed to HuffPost.

The line isn’t completely new. During the fight to establish a select committee on the Green New Deal in the US House late last year, proponents of the policy drafted an 11-page document outlining goals that included making the United States “the undisputed international leader in … bringing about a global Green New Deal.”

But its inclusion in the first formal effort to push a Green New Deal through Congress could spark fresh debate over how central climate change should be to a progressive foreign policy program as more Democrats declare their candidacy for president in 2020. It offers Democrats a counter-argument to President Donald Trump‘s stance that global efforts to deal with climate change disadvantage the United States, and it takes account of how domestic changes as sweeping as what’s proposed under a Green New Deal will affect other countries.

“If you look at historical precedents like the Marshall Plan, it’s really exciting to start thinking about how climate can be centered in a more progressive vision of foreign policy,” Julian Brave NoiseCat, a policy analyst at 350.org, said by phone. “Thinking of a Green New Deal, not just as strictly domestic policy but as a pillar of American foreign policy, becomes a really evocative … idea.”

“If you look at historical precedents like the Marshall Plan, it’s really exciting to start thinking about how climate can be centered in a more progressive vision of foreign policy.”

Corbin Trent, a spokesman for Ocasio-Cortez, declined to comment. A spokeswoman for Markey did not respond to a request for comment on Tuesday.

Foreign policy remains one of the big, unanswered questions about how a serious effort to decarbonize the world’s largest economy would look. Despite his historic efforts to forge the Paris Agreement in 2015, President Barack Obama pledged only $3 billion to a United Nations fund to help poor countries, those whose energy development could determine how bad climate change gets, build cleaner energy infrastructure. When Trump announced plans to withdraw from the Paris Agreement in 2017, he canceled payments on the outstanding $2 billion. Some say the unabated push for new coal-fired plants in countries such as Vietnam, for example, reflects the absence of American soft power pushing for cleaner alternatives.

But there are even bigger implications to decarbonization. Oil- and gas-producing nations like Saudi Arabia and Russia command outsize influence on the world stage in large part due to their control over the global supply of fossil fuels. Entire economies, such as that of Equatorial Guinea, are built around oil fields controlled by US-based giants. And just a handful of small countries are on track to meet the already-lackluster emission reduction goals agreed to in the Paris accords.

“If you are thinking about a battle of geopolitical dominance between Russia and China and the United States, you need to understand how these energy tools play into our ability to maintain influence,” said Greg Carlock, who authored the think tank Data for Progress’s blueprint for a Green New Deal back in September.

The progressive wing of the Democratic Party has long struggled to articulate a clear foreign policy vision, much less one that incorporates climate change as an issue. The topics were largely absent from the 2016 presidential primary, during which Sen. Bernie Sanders (I-Vt.) forced a leftward thrust on a slate of domestic policy issues.

But in recent months, Sanders, who is widely expected to once again declare his candidacy for the White House, has begun “quietly remaking the Democrats’ foreign policy,” as Politico reported in October. In November, Sen. Elizabeth Warren (D-Mass.), who ended last year announcing an exploratory committee for a presidential run, laid out a foreign policy vision tied to her own anti-corruption efforts. Rep. Tulsi Gabbard‘s opposition to US intervention in other countries is expected to take center stage as the Hawaii Democrat’s presidential campaign, launched officially last week, begins in earnest.

There’s a handful of think tanks emerging that focus specifically on a leftist vision of foreign policy, including the Democracy in Europe 2025 and the Progressive International, a group formed by Sanders allies and Greek economist Yanis Varoufakis. Last month, Ban Ki-moon, the former secretary-general of the United Nations, endorsed Democrats’ push for a Green New Deal, calling it “a very, very good initiative.”

But the resolution due out this week could offer progressive and even some mainstream Democrats a North Star as they navigate complicated questions of climate change and foreign policy going into the next election.

“That kind of provision would help the United States support partner and allied nations in dealing with climate vulnerabilities,” said Francesco Femia, chief executive of the nonprofit Center for Climate and Security. “Anything that makes it easier and gives the US more resources to support countries in strategically significant places that are vulnerable to climate change, that helps us.”