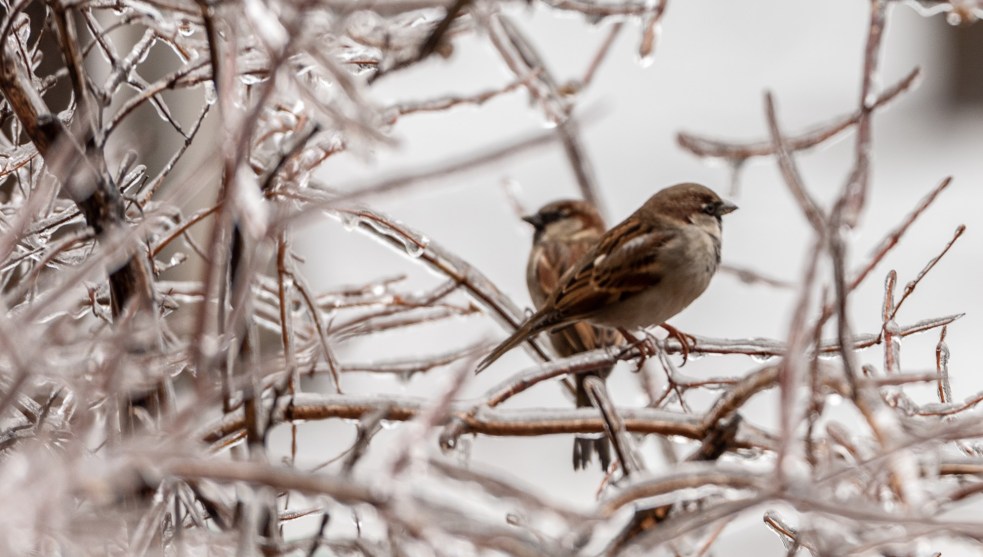 Chicago is shuddering. With temperatures dropping down to -20 degrees Fahrenheit (colder, with the windchill), school is canceled, museums are closed, and transit agencies are relying on flaming, kerosene-soaked ropes to warm up steel tracks. The temperatures are life-threatening, and several 24-hour warming shelters are open. Humans are trying their best to hunker down, but what are the region’s birds supposed to do?

Though the city’s feathered denizens can die in the subzero temperatures—from hypothermia or starvation, if their food sources are locked up in frozen bodies of water—many are generally equipped to handle at least a short burst of bracing cold.

Some of Chicago’s wintertime residents have popped down from their breeding grounds in the Arctic—snowy owls, common redpolls, and snow buntings are known to drop by the Windy City in the cold months, says Alexandra Anderson, a graduate student in environmental and life sciences at Trent University, who studies Arctic birds. “These species may be able to tolerate colder temperatures than other species,” Anderson says. The current temperatures are the harshest that many of the city’s other avian urbanites have seen in their lifetimes—but even so, any bird that winters in Chicago is accustomed to heavy snow and fierce wind. “Species that spend the winter regularly in the region have evolved lots of different ways to deal with these cold snaps,” says John Bates, associate curator of birds at the Field Museum of Natural History in Chicago.

“Species that spend the winter regularly in the region have evolved lots of different ways to deal with these cold snaps.”

They’ve already got cozy coats, for one thing. “Every bird is walking around wearing a down sleeping bag,” says Kevin McGowan, a behavioral ecologist at the Cornell Lab of Ornithology. When temperatures plummet, birds will “stay the heck out of the wind,” McGowan says, and fluff up their feathers to trap air inside. Their body heat keeps the air pocket warm, and the birds carry their insulation with them like a little portable space heater. “I guarantee you every bird you see in Chicago is going to look fat,” McGowan says. “But they’re not—they’re just cold.” They’ll probably also find the warmest crannies they can—up in the the cavities or branches of a tree, close to puffing chimneys, or on window ledges, away from the strongest gusts.

They’ll also be strategic about when and where they leave their redoubts to feed. To limit their time out in the elements, geese, gulls, and ducks may just hold off on eating until the weather eases up (like, “‘To heck with it, I’m not moving until this is done,'” McGowan says). Chickadees and other species that need to eat more often may flock to feeders, where they don’t have to work very hard to rustle up sustenance. These guaranteed food sources will be “inundated,” McGowan says, with birds that might otherwise take or leave the seeds. Jays and crows may head to their own caches, where they previously squirreled away snacks for later.

“Birds, like humans, have a range of temperatures that the body is comfortable in,” says Anderson. This band, known as the thermoneutral zone, varies by species. Arctic seabirds such as eider ducks and thick-billed murres are quite comfortable in cold temperatures, and goldfinches, for instance, have been known to survive temperatures of -94 degrees Fahrenheit*, Anderson says. When temperatures slip below a given bird’s thermoneutral zone, that creature needs to bump up its metabolism to generate heat. “This uses much more energy than normal, which will mean the bird will need to eat more to stay alive,” Anderson says. “Eventually, if the body cannot generate enough heat, the birds will become hypothermic and likely die.”

“Unlike humans, they have counter-current blood circulation in their legs, which allows heat to be transferred from warm arteries to cool veins and keep their legs from freezing.”

When birds are exposed to the whipping wind, their extremities can handle the cold a bit better than, say, human fingers or toes. “Unlike humans, they have counter-current blood circulation in their legs, which allows heat to be transferred from warm arteries to cool veins and keep their legs from freezing,” Anderson says. Even when “their toes get pretty darn close to freezing, that’s okay because there’s not a lot of tissue to be damaged in there,” McGowan says. Chickens—with their wattle and comb—are more vulnerable to nippy temperatures, but, as a rule, he adds, “you don’t see fleshy ornaments on [birds] that have to survive the winter.” Many birds, including geese, will also tuck their bills under their feathers to stay warm “while also increasing breathing efficiency by utilizing warmer air,” according to a statement from the US Fish and Wildlife Service Midwest Region.

Birds don’t have to hang in there much longer in order to survive this particular freeze. The icy fist should loosen its grip in a couple of days, when temperatures will inch—barely—into the single digits. Though some birds won’t make it through, the short duration “hopefully means most individuals will be able to ride it out,” Bates says. In the meantime, birds will do “all the stuff your mom would tell you to do” on cold day, McGowan says. “Don’t go anywhere, and stay wrapped up.”

This post has been updated to reflect the lowest temperature that goldfinches have been known to survive, and to clarify the process of counter-current circulation.