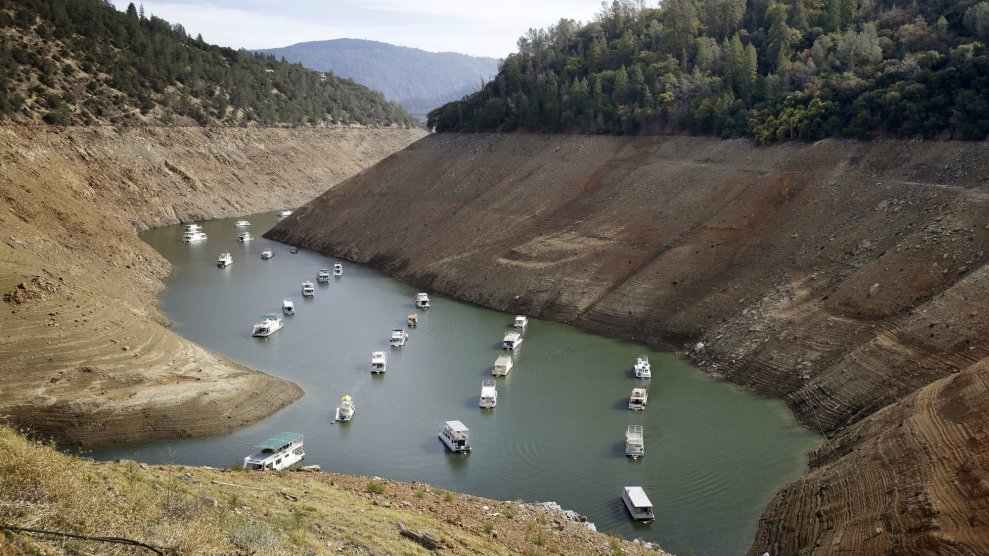 On the first Saturday of December in a northeast neighborhood of Fresno, California, Jeff Collins and his neighbors were putting up their Christmas decorations: strings of lights along identical gable roofs, animated reindeer, and inflatable snowmen. But for Collins, the task involved an extra step—laying down tarps to help the inflatables stay upright in his grass-free yard.

Collins had had the lawn ripped out in 2015, at the peak of one of the worst recorded droughts in state history. He opted for wood chips and Sago palms instead. “I just got tired of trying to keep the grass green,” he said. He’s planning to put in artificial turf eventually—his wife prefers to retain the look of a lawn—but he says he would happily move to a new development where drought-friendly yards are standard.

Though Collins may have been one of the first, he is no longer alone. In his subdivision of more than 200 houses, by this reporter’s count, at least 35 other residents have opted for rock beds or bricks, wood chips and Century plants, or plain dirt.

The change can be seen on Google Maps, which captured it looking verdant between droughts in 2009, and again after years of water restrictions took their toll. Streets where lawns once bled together have become patchworks of dead grass and xeriscaping.

California’s lawns receded during past droughts: Homeowners reduced their water use by adding flower beds and walkways where turf had previously been. (The EPA estimates that a full one-third of the water used by American households goes to watering lawns and gardens.) But this last drought, which ended in early 2017, was different. Thousands of homeowners took advantage of “cash for grass” programs to remove their lawns entirely.

Statewide, the interest in rebates for lawn conversion appears to be dwindling. From August 2015 to August 2016, the Department of Water Resources handed out more than 8,000 turf rebates, representing more than 9 million square feet. In 2018, just 114 rebates were given out. This tracks with an overall decline in water conservation since the drought ended. Fresno’s estimated residential water use in 2017 was lower than in 2013, but had crept up from 2015 levels, according to the California State Water Resources Control Board.

Landscaper Bill Anderson got his start mowing lawns in Fresno 60 years ago, and weathered three previous dry periods with his company, Anderson Landscaping. He estimates that he has converted at least 500 Fresno-area lawns over the last three years, including many in Collins’s neighborhood—an upper-middle-class area where homeowners can generally front the $4,000 cost. (The city offers eligible homeowners a turf-removal rebate, as does the state.)

Anderson’s basic price gets them up to 1,000 square feet of sod removed and replaced with river rock, to create a dry-creek effect. He sometimes adds drought-resistant plants native to California, which are watered by converting a standard sprinkler system to drip irrigation.

Anderson says his best marketing tool is putting a little extra flair on the first lawn he converts on a block. Often, one trendsetter converts first, with neighbors following after they see how it turns out. The result is a pattern of drought-tolerant lawns clustered in groups of four or five, while on the next street over, the lawns may be green all the way down.

Lawn conversions draw people on both sides of the political spectrum, as evidenced by the lingering post-election signs in this subdivision’s yards that favored both Republican Representative Devin Nunes and his one-time Democratic challenger, Andrew Janz. And it’s not necessarily that conservatives rip out their lawns for economic reasons and liberals do so for environmental ones. Fresno is located in one of the most productive agricultural areas in the world, so living here brings a consciousness of water issues, as well as a pride in the region’s miles of fields. “My Job Depends on Ag” is a common bumper sticker about town.

“Around here, water and air quality are our two main things. Everyone has those on their mind,” Anderson said. “I don’t think people would convert if that were not the case.”

Even so, the drought-resistant look is not for everyone. Realtor Gretchen Sullivan has been on both sides of such listings in the area, and says few clients specifically put lawn alternatives on their wish list.

“More often, it’s a negative, especially the houses with artificial turf. It’s the aesthetics, but it’s also maintenance. Dogs pee on it and then it smells. In the summer, it gets so hot, kids can’t play on it.”

“More often, it’s a negative, especially the houses with artificial turf,” she said. “It’s the aesthetics, but it’s also maintenance. Dogs pee on it and then it smells. In the summer, it gets so hot, kids can’t play on it.”

But to see the Californian suburb of the future, you only have to travel a few miles north or southeast, where new developments are shooting up out of the farmland. These have closely-packed homes in coordinating sienna tones, each with only a little xeriscaped space out front and, often, pavement in the back.

As Julie Saare-Edmonds, a senior environmental scientist with the landscape program of the California Department of Water Resources, put it: “Why would you want to mow a really tiny yard? It’s one thing if you use your lawn, but if it sits out there and you have to mow it and take care of it and you don’t use it, then why have it?”

“There was a social-awareness aspect [to turf removal]: This was their one way to improve the overall water situation,” Saare-Edmonds added. “Now people think the emergency is over.” (But she added that deducing a pattern from rebates is not straightforward, since some people convert lawns without them.)

Still, Saare-Edmonds believes change on a larger scale is possible, especially if another severe drought hits. Permanent water restrictions will go into effect in the 2020s, thanks to two state laws passed last year, which could lead to a surge in turf removal. And Anderson’s experience suggests a lasting shift in how Californians think about their yards is under way.

“Not in a million years did I think that people here would give up their lawns. It’s what they’re used to: mow the lawn, maybe trim the shrubs,” Anderson said. “But converting is a lot more creative. And the same people have shown an astounding willingness to accept the change.”