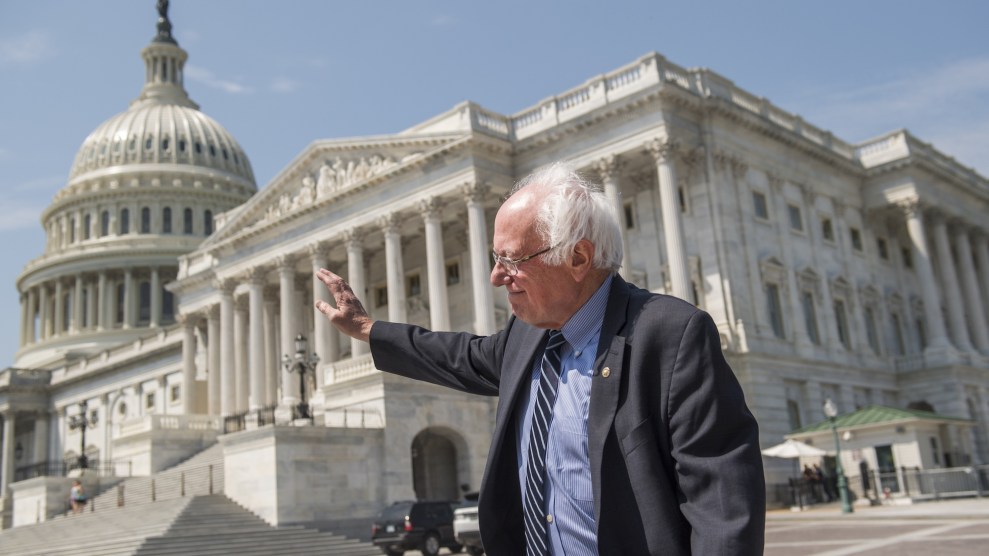 Bernie Sanders didn’t have to remind the hundreds of activists, young people, policy wonks, and thousands of viewers online watching his climate change town hall Monday night of “the great crisis facing our planet and facing our humanity.” That was one of the central points he made during the event entitled, “Solving our Climate Crisis,” which might be the beginning of a likely presidential bid for Sanders in 2020. But even though the 2016 presidential hopeful was the main attraction during the event, the real star was newly elected New York representative Alexandria Ocasio-Cortez, who has elevated the Green New Deal, a rallying cry for a complete realignment of the US economy for a carbon-free future, to top billing in the Democratic party.

“This is going to be the Great Society, the moonshot, the civil rights movement of our generation,” Ocasio-Cortez, a former Sanders organizer, told the crowd of about 400 on Capitol Hill. “That is the scale of the ambition that this movement is going to require.”

The fact that Sanders, fresh out of the gate after campaigning during the 2018 midterms, is moving to claim the mantel on climate change, is a significant shift from previous years when Democratic presidential contenders typically treated the issue as just one of the many in which they differed with Republicans. The ground has been moving under party leaders, including those like Sanders and Nancy Pelosi, who have long records on advocating for measures to combat climate change.

There are a number of reasons for the increased prominence of the issue: Recent reports from both the United Nations and the federal government that have recast climate change in the public eye from a niche, future-tense issue to an urgent problem. Record-breaking fires, extreme weather, and repeated hurricanes have given the public clear examples of what had previously been only warnings from scientists. Plus, there’s a stronger movement of youth activism than ever before, reacting to the Trump administration’s complete contempt of global warming,

Given all this, 2020 is shaping up to be a perfect storm for climate change to take on a central position in the Democratic debate.

Sanders’ event was about climate change, but it was also about a profound generational shift in the party. “Can you interrupt this program to make an announcement on your shoes?” asked Sanders, interrupting Ocasio-Cortez by putting a hand on her shoulder, in what was an attempted meta-media commentary joke. The New York Rep-elect quickly redirected the conversation back to her talking points, calling out Republicans’ attacks on her for distracting the public from climate change.

She explained, briefly, her Green New Deal, a short document calling for a Select Committee that pursues 100 percent renewable energy, energy-efficiency upgrades, decarbonizing all major sectors, and a massive jobs and retraining plan. “We can use the transition to 100 percent renewable energy as the vehicle to establish economic, racial and social justice in America,” Ocasia-Cortez said. This is hardly the only messaging out there for climate legislation, but it’s recently become the most high-profile one, aided by the recruitment of 18 other progressive House Representatives around a four-page framework they hope a House Select Committee will take up in the new Congress. There is still plenty of debate within Democratic circles on the best strategy for eventual federal legislation—a carbon tax or jobs program, the promise of 100 percent renewable energy or an interim goal—but the Green New Deal goes bold on a progressive vision that could attract a new kind of coalition.

Sanders also discussed ambitious action, focusing on diagnosing the problem. “All of these reports make a very simple and profound point. And that is, time is late,” he said. “This is a crisis situation, it is unprecedented and we’ve got to act in an unprecedented way.”

The actual policy is still to come. Sanders is expected to unveil a bill in the new year that would, in the vein of his Medicare for all proposal, frame the debate on climate change. “It has the aroma of a Green New Deal, if you will,” an aide told E&E News, borrowing the language from the House Democrats’ proposal.

Throughout the night, several speakers nearly winked at the lack of substance during the discussions, with quips about ExxonMobil’s media sponsorships and wondering if Trump could possibly be correct on the science. But the audience had an appetite for more.

“I want to see what specific policies can make the elements of the Green New Deal come into fruition,” James Jackson, a student at the University of Texas in Tyler, told The Guardian‘s Emily Holden afterward. “We can say let’s have a a jobs guarantee for green jobs but where are those green jobs going to be, who’s paying for them. I want to find those practical ways to enact the Green New Deal policies.”