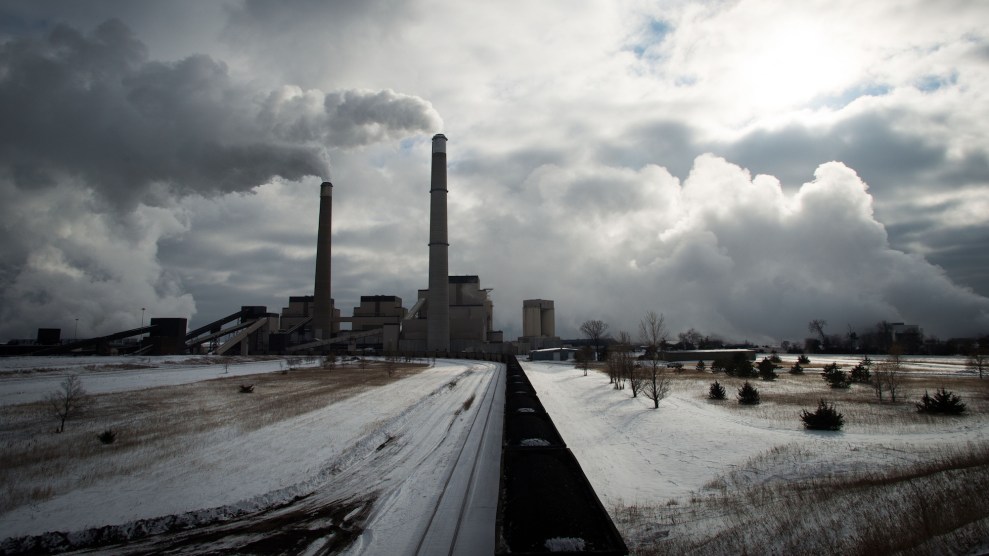 Children and pregnant women hear the warnings against eating too much fish because of potential exposure to mercury. But where does that mercury come from? Coal and oil-burning plants are the number one source of mercury in the US, and they leech not just that neurotoxin but arsenic, acid gasses, and a host of other air toxics into the atmosphere that drift back towards the earth and water, and into our food supply.

In 2011, the Obama administration proposed its mercury, or Mercury and Air Toxics Standard, and since then, emissions have fallen 81 percent, as the vast majority of plants have complied with new pollution control technology or shuttered old plants that weren’t worth the upgrade. The EPA’s work on mercury counts as one of its biggest environmental successes the last eight years.

But just before the Environmental Protection Agency became the latest agency affected by the government shut down, the Trump administration took its first formal step to unravel the regulation. In the process, EPA administrator Andrew Wheeler is fulfilling a major item on the wish list for coal baron and Trump donor Bob Murray, who also happens to be one of Wheeler’s former clients from the time he was a lobbyist with the firm Faegre Baker Daniel. Unlike many of the EPA’s reversals of Obama-era policy, Wheeler is tackling the mercury rule sideways by fiddling with the cost-and-benefit estimates, while leaving the rule itself intact—for now. However, this change could likely make it easier for coal companies like Murray Energy to challenge the rule in court.

“It is one of the most cynical actions by the head of the Environmental Protection Agency in the agency’s long history,” Environmental Defense Fund’s general counsel Vickie Patton says. “Andy Wheeler is undermining the very foundation of lifesaving limits slashing the mercury, arsenic, acid gasses, lead, and lethal particulates from coal plants, inviting the coal industry to pivot from his attack to tear down the standards themselves.”

The EPA first promised in 1994 to look at whether mercury fell under the category of pollutants deemed appropriate and necessary to regulate under the Clean Air Act. By 2000, just in time for the Bush administration, the agency determined it did. Environmentalists fought for more than 10 years to see a strong rule in effect, and after lengthy court fights with the Bush administration, the Obama administration proposed a replacement for the court-vacated rule in 2011. It survived a Supreme Court challenge in 2015 that kept the regulation in place, but forced Obama’s EPA to reevaluate the costs of implementation to decide whether the regulation was still reasonable.

The direct benefits from mercury reductions may appear to be minor compared to the Obama administration’s estimated $9.6 billion annual cost to the industry to comply with the new rule. But the estimated total health benefits from reducing lung-clogging soot and nitrogen oxide, account for up to 10 times that amount annually, saving 11,000 lives each year, according to the EPA’s estimates. Wheeler’s EPA argues that those aggregate savings do not fall under the purview of the Clean Air Act. Comparing the rule’s costs to this new definition for stripped-down benefits, the agency no longer considers it “appropriate and necessary” to regulate these emissions.

Most utilities have already complied with the rule, either by installing pollution-control technology or shuttering their oldest plants. Several industry groups have even argued for the EPA to keep it in place. A July letter to the EPA, signed by the Edison Electric Institute, American Public Power Association, and the National Rural Electric Cooperative Association, urged the EPA “to leave the underlying MATS rule in place and effective.”

But the EPA regulation still faces challenges, including a lawsuit by Murray Energy. CEO Bob Murray included it on a wish list that he submitted to the Trump administration in early 2017 requesting environmental rollbacks. While the EPA emphasized in a press release that it “is not proposing to remove coal- and oil-fired power plants from the list of sources that are regulated under Section 112 of the Act,” supporters worry that without the basic legal argument in favor of the rule, a court could then toss and end the EPA’s enforcement.

“It is not unreasonable to expect if the standards go away there will be some number of utilities that will not run the pollution controls it installed,” former Obama EPA head Gina McCarthy said in a call with reporters last week. “If that’s the case we will see higher emissions of mercury, arsenic acid, gasses that are also captured along with pollution controls.”

During his confirmation hearing to become EPA deputy, Andrew Wheeler faced questions from Senator Sheldon Whitehouse (D-R.I.) about his role in lobbying for Murray’s memo. Wheeler said he “saw it briefly,” but emails from the Department of Energy show he played a far greater role. In one case, Wheeler set up a meeting between the DOE and Murray to discuss his wish list.

Moms Clean Air Force co-founder Dominique Browning sees the EPA’s move as a thinly veiled attempt to fulfill another one of Murray’s items. “What they’re proposing is so fundamentally undermining the foundation of the standards it’s an invitation to the coal [industry] to tear it apart,” Browning says.