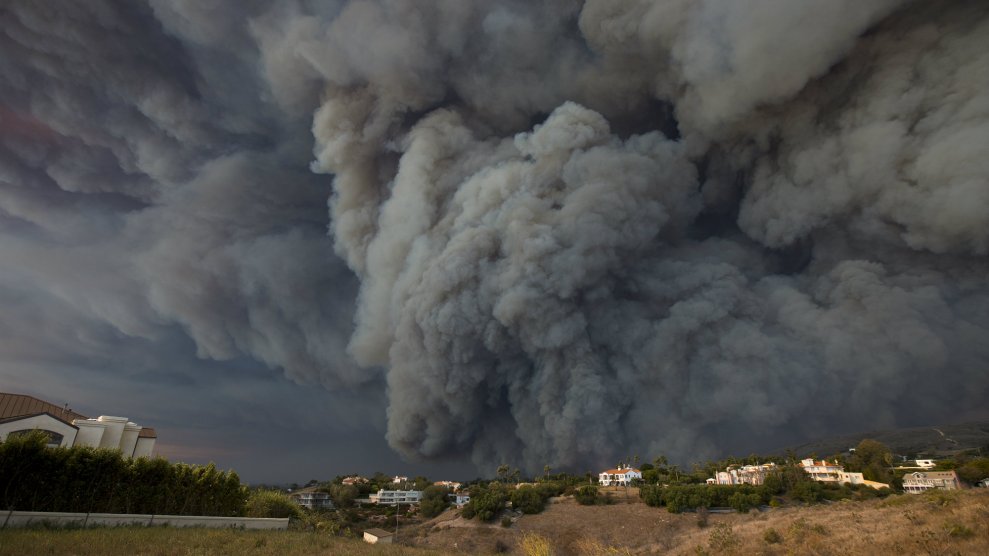 A massive smoke plume rises above the the Woolsey Fire in Malibu, California.David McNew/Getty Images

America’s coasts sit 3,000 miles apart, and are separated by differences both geological and philosophical. But they sit under the same sky—and when disaster strikes on one edge, the air sometimes carries it to the other.

In the parched spring of 1935, dust blew eastward. New York newspapers wrote that Cleveland, Ohio, had been “darkened by a silt cloud” that dampened visibility. The air fouled over the New York cities of Albany and Corning, too, where residents reported an “acrid odor” in the “yellowish fog” that hid the hills. Now, after the Woolsey, Camp, and Hill Fires have scorched more than 200,000 acres in California over the past few weeks, residents father east are witnessing the tail effects.

The blazes’ most devastating consequences were felt nearby, of course, where the fires snatched lives, displaced families and animals, and reduced homes, attractions, and towns to rubble. But proof of them drifted through the sky—carried along the jet stream, high above the ground.

When plumes stretch several miles up in the atmosphere and are carried along the jet stream, they move pretty quickly through the air. At high altitudes, “smoke from the US can reach Europe, and smoke from Siberia and Russia can drift to Canada and parts of the US,” says Ravan Ahmadov, a research scientist at the National Oceanic and Atmospheric Administration who works on air modeling. In August, smoke and particles from 15 fires burning across California reached New York, and smoke from billows in British Columbia drifted across Canada, and were visible from a satellite more than one million miles away.

At high altitudes, “smoke from the US can reach Europe, and smoke from Siberia and Russia can drift to Canada and parts of the US.”

As recent fires singed California, low winds held the smoke stagnant around the Central Valley, Ahmadov says. “The region probably had one of the worst air qualities in the world for several days,” Ahmadov adds. When the winds finally picked up, the smoke began to drift eastward. As the smoke moves farther from the source, it often appears as a diffuse haze. This might be especially noticeable at sunset, because the smoke particles block shorter wavelengths on the spectrum of visible light, while allowing the longer ones to get through. That’s why a smoky sky might be a rich red or orange, even far from the embers.

Some types of smoke are especially troublesome for people on the ground. NOAA tracks both “near-surface smoke” and smoke that hangs higher the atmosphere. The smoke within 26 feet of the ground is the most dangerous—that’s what aggravates coughs and wheezes when inhaled. That danger is one reason that NASA and NOAA wants to predict its path.

For a long time, that was hard to do. With that in mind, a few years back, the agencies rolled out a model that uses satellite data to forecast smoke’s path and density based on how much heat a particular fire throws off. Ahmadov was a lead developer on the model, known as HRRR-Smoke, which also accounts for temperature, wind speed, and precipitation, as well as the vegetation on the ground (because some plants go up faster than others). It generates four forecasts each day, every six hours, which look 16 miles up into the atmosphere. It’s able to estimate conditions up to 36 hours in the future.

Like any forecast, it’s not guaranteed. The orbiting satellite only captures images of each location a handful of times per day, and a lot can change from one image to the next. But the data the satellites collect and funnel into the model are already translating into action on the ground. Over the past few months, the model’s forecasts contributed to officials’ decisions to halt Amtrak service and close portions of Yosemite, according to NASA’s Earth Observatory. The forecasts meant that schools and sports teams in Utah and Oregon could cancel or relocate recess or sporting events before their sky became choked by smoke.

As Thanksgiving neared, some residents of the US East Coast took to Twitter to report the smell of smoke, and to share pictures of a sunset that appeared fiercely red and orange. Ahmadov was skeptical: A few days earlier, the model had shown smoke hanging high in the sky, sufficient to tint the sky at sunset, but likely not low enough to be sniffed out on the the ground. On Thursday, the near-surface forecast showed relatively low levels of smoke drifting across Utah, Arizona, and Texas, some of which could be from prescribed burns.

California, meanwhile, was expecting rain. While wind pushes smoke elsewhere, “rain completely removes the smoke from the air and washes it away,” Ahmadov says. Until it does, any lingering smoke is a reminder of the environment we all share—even if we only experience of sliver of it firsthand.