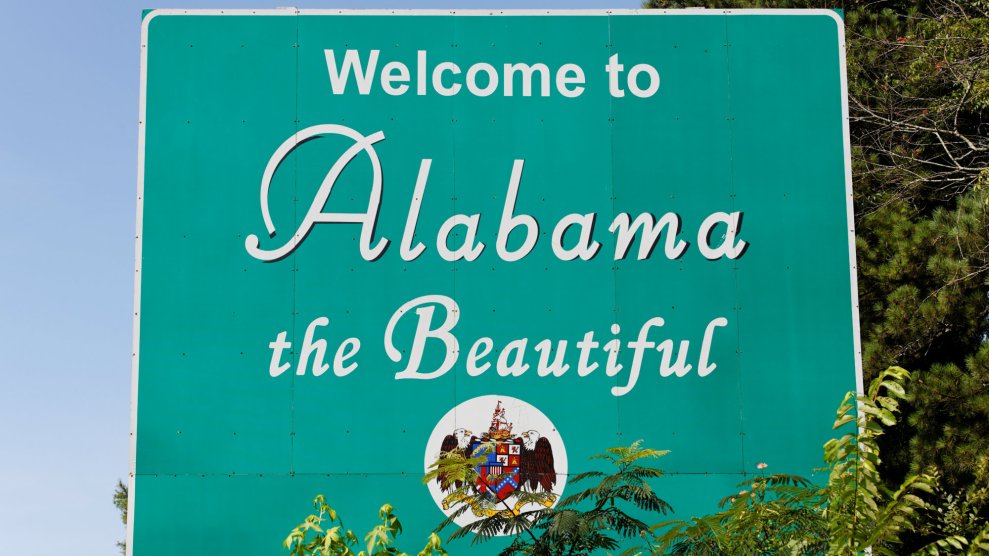 The state of Alabama and one of its counties are facing a federal civil rights complaint with the Department of Health and Human Services over unsanitary sewage conditions that have been plaguing a historically black county for decades. The environmental group Earthjustice and the Alabama Center for Rural Enterprise filed a lawsuit last week alleging the Alabama Department of Public Health and the Lowndes County Health Department both failed to protect black residents from inadequate sewage systems, which has led to water contamination and an outbreak of an infectious disease prevalent in areas without indoor plumbing.

“It is a terrible injustice that a region that has borne a tremendous burden of systemic racial oppression…has to live with the degradation of unsanitary or nonexistent sewer systems,” the Alabama Center for Rural Enterprise’s founder Catherine Flowers said in a press release about the complaint. The suit says the two agencies administering the wastewater programs have discriminated against black residents of Lowndes County for years by failing to abate unsanitary conditions in a way that disproportionately harmed black residents.

“It is a terrible injustice that a region that has borne a tremendous burden of systemic racial oppression…has to live with the degradation of unsanitary or nonexistent sewer systems.”

The suit alleges the blame for these conditions falls on the state and county health departments and their failure to provide access to modern sewage and plumbing systems. Countywide, more than 80 percent of residents do not have access to a municipal sewer system. Instead, these homes rely on a septic system to dispose of wastewater, which residents are responsible for buying and maintaining. Although exact numbers remain unknown, in 2011, the state estimated that anywhere between 40 and 90 percent of Lowndes County homes have no septic system or inadequate ones and that half the homes with septic systems can expect their systems to fail.

Much like the surrounding area, Lowndes County is deeply impoverished, with 29 percent of the 10,000 residents living below the poverty line. The county is also starkly divided by race: 73 percent of the population is black and 25 percent is white, with 37 percent of black residents living below the poverty line while only 4 percent of whites do. The overall median household income is $27,914, but for white residents, it’s $52,604; the median household income for black people is only $21,686.

The poor sanitation has led to the recurrence of a disease long thought eradicated in the United States. A September 2017 study by scientists at Baylor University and published in the American Journal of Tropical Medicine and Hygiene tested 55 Lowndes County residents and found that 35 percent of them had low levels of hookworms. The parasitic worms are transferred to humans through soil that has been contaminated with infected human feces. Those who suffer from low-level infections may show no symptoms, but a person with a more serious infection may experience pain, diarrhea, fatigue, and anemia. This infectious disease is commonly associated with extreme poverty and mostly found in developing countries.

In December 2017, Philip Alston, an Australian United Nations official tasked with touring impoverished areas, visited Alabama. (Some of his previous destinations included Chile and Saudi Arabia.) Residents of Lowndes County showed the official where straight pipes took sewage from their homes directly into wooded areas, where it sat in open-air pools.

Aaron Thigpen, an activist in Lowndes County, took Alston to the property where some of his extended family lives and pointed out exposed pipes running over a fetid swamp of raw sewage. “These two pipes are the raw sewage pipes coming from the house,” he said, according to a report from AL.com. “And you’ve got your main water line here, and it may have a hole in it, so everyone gets sick all at once.”

In a statement released after his visit, Alston said, “I saw various houses in rural areas that were surrounded by cesspools of sewage that flowed out of broken or non-existent septic systems.” He added, “The state health department had no idea of how many households exist in these conditions, despite the grave health consequences.” In addition to hookworm, residents were also vulnerable to viruses and bacteria.

In April, the Alabama Department of Public Health published a public notice asserting that after further testing, nine of the 20 individuals originally identified as positive for hookworm did not actually have the disease.

One reason these conditions exist is that residents are not permitted to install conventional septic systems, which cost between $2,000 and $3,000 to install. The systems are incompatible with the type of soil this region of Alabama is known for. Instead, residents must install special systems that meet state standards and can cost anywhere between $6,000 and $30,000—creating an often-insurmountable financial burden for low-income families.

In Alabama, it is a criminal misdemeanor to “build, maintain, or use” an unsanitary system. In the past, the state has issued arrest warrants for residents who did not receive permits for their septic tanks. (Violating this law is punishable by a $500 fine or jail time.) According to the suit, from 1999 to 2002, the state issued warrants to at least 10 black Lowndes County residents for violating this law.

The complaint wants both the state and the county to retract their public statement saying there is no hookworm in Lowndes County. They also want to institute an education program for residents about the risks of infection and treatment options should infections strike. The Alabama Center for Rural Enterprise is calling for an independent investigation into deficient wastewater systems. Ultimately, Flowers hopes this lawsuit will make a difference “in the lives of African Americans who deserve the same rights to water and decent health as everyone else.”