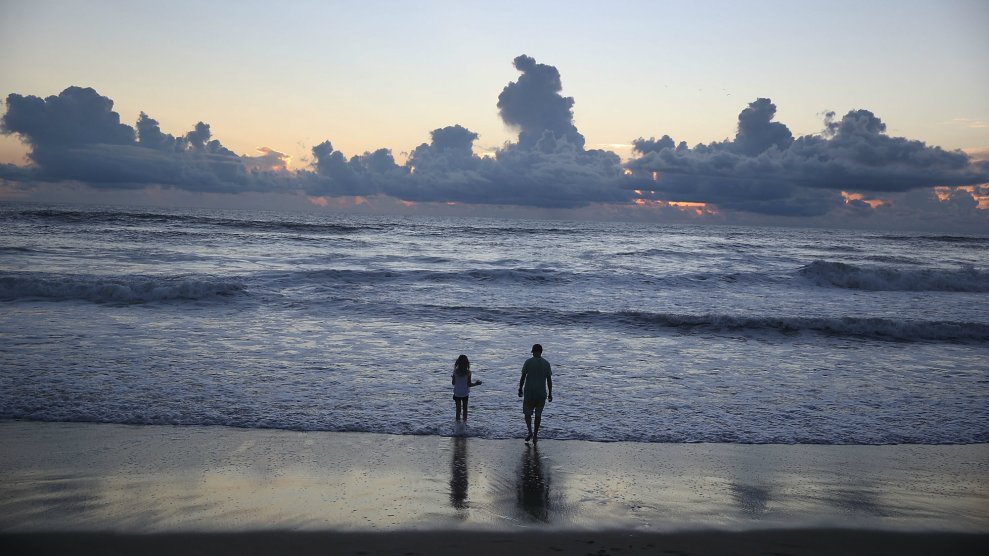 In 2012, North Carolina legislators passed a bill that barred policymakers and developers from using up-to-date climate science to plan for rising sea levels on the state’s coast. Now Hurricane Florence threatens to cause a devastating storm surge that could put thousands of lives in danger and cost the state billions of dollars worth of damage.

The hurricane, which is expected to make landfall on Friday, is shaping up to be one of the worst storms to hit the East Coast. Residents of North Carolina’s Outer Banks and mainland coasts have already been ordered to evacuate. President Donald Trump declared a state of emergency in both North and South Carolina, and a Federal Emergency Management Agency administrator said that the Category 4 hurricane will likely cause “massive damage to our country.”

And the rise in sea levels, experts say, is making the storm surge worse.

Sea level rise is a direct consequence of global warming; the warming of the ocean has resulted in thermal expansion and melted ice sheets and glaciers that are causing the oceans to rise. Since 1950, the sea level has risen 6.5 inches—a number that sounds small but has actually had major consequences across the country.

“It only takes a few extra inches of water depth to be the difference between a ruined floor and no damage, or a ruined electrical system and just a ruined floor,” Strauss said. “Floods tend to be a great deal more destructive and costly than homeowners anticipate.”

Sea level rise can also affect the severity of hurricanes, said William Sweet, an oceanographer at the National Oceanic and Atmospheric Administration. “If you compared storm surge heights from the same storm at the same location over several decades, the surge would be higher—assuming no change in flood defenses—because of sea level rise,” Sweet said.

But in North Carolina, lawmakers chose to ignore the threats. A panel of scientists on the state Coastal Resources Commission issued a dire warning in March 2010, estimating that the sea levels along the state’s coast would rise 39 inches over the next century. Conservative lawmakers and business interest groups feared the report would hurt lucrative real estate development on the state’s coast and sought to undermine it. A lobbying group committed to economic development on the coast accused the panel of “pulling data out of their hip pocket.”

McElraft introduced the bill in April 2011, and it passed the legislature in the summer of 2012.

Part of the bill stipulated that state and local agencies must also refer to historical linear predictions of sea level rise rather than current research, and another alarming section required that research look only at 30-year predictions rather than at a century, as the CRC report had done. Supporters of the bill saw short-term benefits in more affordable insurance, and continued opportunities for real estate development and tourism along the attractive coast. Critics saw the long-term consequences of damaged homes and businesses and vast swaths of the state being swallowed by floods.

Environmental scientists, coastal researchers and a number of lawmakers called the measure a blatant denial of crucial climate science and criticized then-Gov. Bev Perdue (D) for not acting on the bill and therefore allowing it to become law.

“By putting our heads in the sand, literally, we are not helping property owners,” said then-state Sen. Deborah K. Ross. “We are hurting them. We are not giving them information they might need to protect their property. Ignorance is not bliss. It’s dangerous.”

In North Carolina, the state’s topography and the rising sea levels have made for even more dangerous storms and floods, Strauss said. Unlike coastal communities that have deep, cliff-like dropoffs, North Carolina’s coast is flat, wide and shallow, “like a kiddie pool,” Strauss said. “When you think about storm surge, some places have higher potential than others. The same storm would produce different surges depending on the topography,” said Strauss.

The state also has a wide, shallow continental shelf compared with places like Miami, which “means there is massive potential for a storm surge,” he said.

“Especially a storm like this, that’s moving straight forward,” he said. “It’s a really bad setup.”

At the same time, climate change has “supercharged” recent storms, as HuffPost‘s Chris D’Angelo reported on Friday, putting Florence on track to do as much, if not more, damage than last year’s Hurricane Harvey, which devastated parts of Texas and Louisiana.

Climate change experts say a more proactive approach to emergency preparedness is necessary, including a better understanding of how global warming and sea level rising are affecting storms.

But it’s often complicated to bring the issue of how to adapt to the changing climate into emergency management discussions, said Jessica Whitehead, the coastal communities hazards adaptation specialist at North Carolina Sea Grant. Emergency response is so often dealing with a crisis, and “it is exceptionally difficult” to plan for one catastrophe while recovering from another.