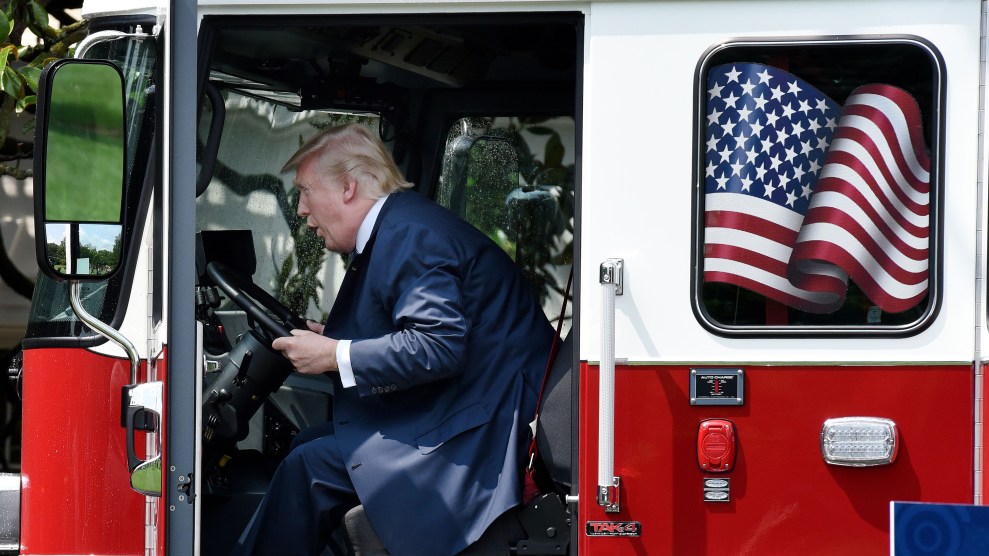 With California’s latest wildfires claiming a seventh victim Sunday, President Donald Trump has yet to tweet condolences to those affected by these catastrophic and all-too-familiar disasters. Several thousand firefighters continue to battle the Carr and Mendocino fires in Northern California as well as several smaller blazes. But with the new normal pushing the limits of the state’s firefighting capacity, Trump has seized on an erroneous scapegoat: state environmental laws. Here he was over the weekend:

On Monday he doubled down:

Governor Jerry Brown must allow the Free Flow of the vast amounts of water coming from the North and foolishly being diverted into the Pacific Ocean. Can be used for fires, farming and everything else. Think of California with plenty of Water – Nice! Fast Federal govt. approvals.

Perplexed, I reached out to Peter Gleick, a California scientist widely known for his expertise on water and climate issues—and the author of a fiery Twitter thread taking the president’s tweet to task.

Mother Jones: Is our water really being diverted into the ocean? And are our firefighters complaining that they don’t have enough water to tackle the wildfires in the north?

Peter Gleick: That’s completely absurd! There is no environmental law that has put any limits whatsoever on the amount of water available to fight these fires. There’s no shortage of water to fight these fires. Of course, it’s always extremely difficult to understand what Donald Trump’s tweets mean or what he thinks he’s saying or what he knows. California water policy is very complicated. There are many laws, policies, and historical practices that have determined where water goes, who gets to use it, and how much is left in our rivers.

Both of the president’s tweets reveal a profound misunderstanding of the way California water works. It’s not that we’re diverting water into the Pacific Ocean. The tiny amount of water that reaches the Pacific Ocean these days is what’s left after we’ve diverted the vast majority of our rivers to cities and farms. He just has this completely backward. And furthermore, there’s no water policy that would have made these fires worse. We don’t take water from the forest. The forest provides water to use, and water is allocated to farmers and to cities and a little bit to the fish. And what’s left is in the rivers. And it flows down to our ecosystems. There’s just nothing in his tweet that makes any sense, except maybe the very last line.

MJ: “Must also tree clear to stop fire spreading.” What is he referring to there?

“He’s not only tweeting his ignorance about the way resource policy works, but he’s said nothing about the victims.”

PG: I imagine he’s throwing a bone to the lumber industry, which would like to do more cutting. There isn’t any disagreement that California forest policy—and forest policy in the United States—shouldn’t be better. Everybody agrees it should be better. That’s been true for decades. Whether a different forest policy and timber policy put in place decades ago would have changed the risk of forest fire, we don’t really know. We do know we need to do a better job at managing forests. But I don’t think that is what he’s commenting on.

He’s also completely ignoring the other reality, which is that years of severe drought have killed California forests and left a lot of fire material available. And climate change is causing extreme heat and extreme weather that is making these fires worse.

MJ: Climate change is clearly not on the agenda for this administration.

PG: That’s right. Every scientist in the world understands that climate change is real, and it’s making these kinds of extreme events worse. But either he’s unaware of that or he doesn’t care.

MJ: Why does it benefit the president to present the issue in this way?

PG: He’s clearly pandering to those in California who think that we could squeeze more water out of the system for their own usage, which is part of the debate we’ve been having for 100 years. There’s nothing new about the fight over California water. But the president is weighing in, both in an ignorant fashion and in an extremely unhelpful fashion. It’s typical that he’s not only tweeting his ignorance about the way resource policy works, but he’s said nothing about the victims of these fires. It’s typical of his insensitivity.