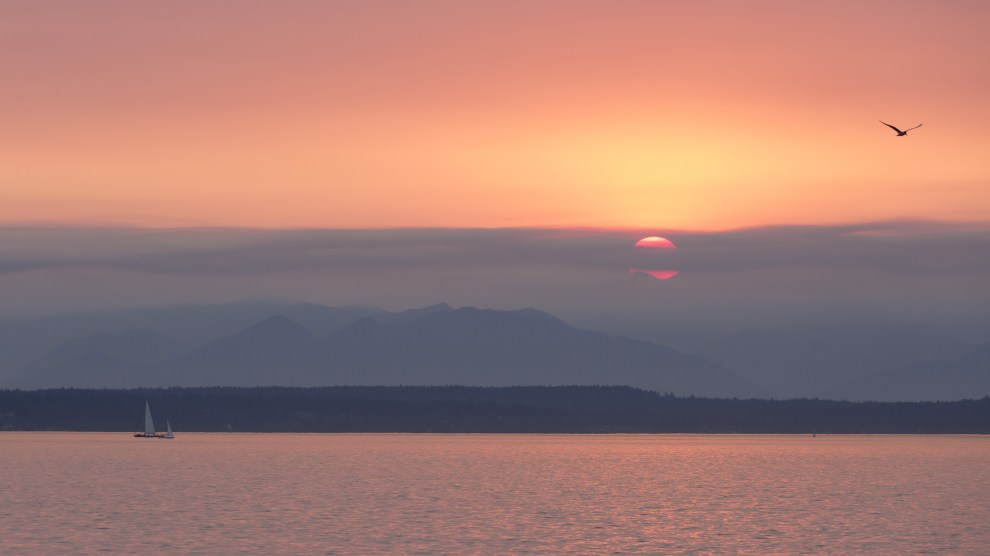 Firefighters are continuing to tackle huge blazes across British Columbia and the American West—as of Friday, 16 large fires and many more small fires were burning across Washington and Oregon. Heavy smoke blankets cities from Oregon to Colorado, and in Seattle, authorities have advised even healthy adults to stay indoors. Schools and sports teams have been urged to postpone outdoor activities, and flights have been delayed across the Pacific Northwest.

After two consecutive years of severe smoke in the Pacific Northwest, experts warn that smoky summers could continue in the American West, as climate conditions lead to larger and more destructive wildfires.

Here are some images and reactions from residents in the region:

#Seattle is once again looking — well — ugh. Smoke will be a problem through Tuesday. #wawx pic.twitter.com/7kHE16Zyhm

We don’t have August in the West anymore. We have Smoke Season. The air quality: “Unhealthy.” And people ask if I’m serious when I say that part of the reason I don’t have kids is b/c I’m increasingly convinced we’ll be the last generation to inhabit a largely inhabitable earth. pic.twitter.com/eywtTUjGps

Last year, researchers from Colorado State University and the University of Houston found that wildfires may be responsible for thousands of deaths annually due to the tiny pollution particles, known as PM2.5, that the fires release into the atmosphere. Jeffrey Pierce, a professor of atmospheric science at Colorado State University, estimated that between 5,000 and 25,000 people in the United States may currently die each year from PM2.5 caused by wildfires in the US and Canada. Children, seniors, and those with heart or lung diseases are especially at risk for the coughing, headaches, shortness of breath, and chest pain brought on by inhaling contaminated air.

Public health experts advise this group and others to protect themselves from wildfire smoke as they would from other air pollutants: by keeping windows and doors closed, running air conditioners, and not relying on paper dust masks, which have been proven insufficient, for protection.

Watch Seattle disappear into a cloud of wildfire smoke. pic.twitter.com/DIta8REtgU

Entire state of #Montana all 56 counties have dangerous air quality alerts as smoke from BC mixes with fires from the western US. Here’s a view outside #Bozeman #mtfires #mtfire #wildfire #mtpol #mtnews pic.twitter.com/BcobaP1OS6

On our @AlaskaAir flight back to SEA. The wildfire smoke is so bad they can’t land, so we keep circling. pic.twitter.com/MqkQSyiC70

A breakdown of summer in the PNW:

I'm watching Blade Runner so I can imagine a world with better air quality. #Seattle #Smoke