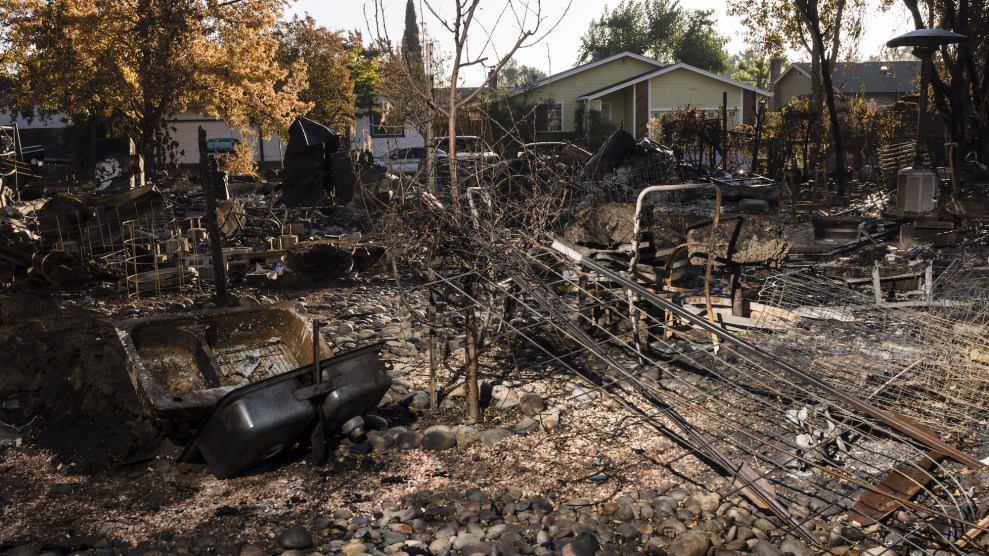 Hundreds of homes were burnt to the ground in Coffey Park as high winds pushed the Tubbs fire from house to house. David Gross/ZUMA Wire

The Night The Fire Hit

She shook her husband, Steve, awake, and he jumped out of bed and looked out the window. The sky over their neighborhood of Coffey Park, in Santa Rosa, California, was filled with thick, dark smoke, an eerie glow of light behind it. Their electricity was out.

Steve ran downstairs and pulled open the garage door. A violent gust of wind blew a wave of debris from the street into their garage. He knew they had to go.

He yelled up to Michele to grab their 3-year-old son, Desmond, out of bed and get in the car. Michele rushed to call her mother, who lived a mile away with her granddaughter. Her mother said she could already see flames near her house. Michele told her to drive to theirs right away.

Steve grabbed his computer, some snacks for their son and a suitcase they still hadn’t unpacked from a trip that weekend. He thought that would be enough; they’d be back soon.

As soon as Michele’s mother arrived, they all piled in the car. As they were pulling away, a golf-ball-size ember hit the windshield and burst apart. Steve drove away from the fires as fast as he could, heading southwest.

Cars were headed in every direction, some driving onto sidewalks in the rush to escape. About five miles from their house, they pulled into a grocery store to figure out where to go. In the distance, they could hear what sounded like small bombs going off ― propane tanks from people’s barbecues exploding in the fire’s heat.

They decided to go to Michele’s cousin’s house, farther out in Santa Rosa. Once there, they sat down together in front of the TV and watched the news. Some of the family members nodded off just as the sun rose around 7 a.m., but Steve couldn’t sleep. He got back in the car and drove to their neighborhood. Smoke hung thick in the air, and flames rose 10 feet up in some places. As he drove closer to where their house once stood, he saw only ashes.

The Rahmns phoned their insurance company to tell them the house was gone. Then they called family and friends to deliver the news. Steve called his office to tell them the company car that had been parked in their driveway was a total loss, and he was going to need a few days off while the family figured out what to do. They’d just moved in in July, three months before the fires hit.

Steve’s cousins up in Healdsburg offered their house, about a 20-minute drive north. It wasn’t ideal―that area was still under an evacuation advisory as well, but they were lucky to have somewhere to go and take a moment to breathe.

Their toddler kept asking them when they could go home.

In the first weeks after the fire, the Rahmns were in shock. Steve would wake up each morning and have to remind himself of what happened.

They couldn’t go back to see what was left of their house for over 10 days, as law enforcement had closed the area off to everyone but emergency personnel.

When Steve and Michele were finally able to walk through what was left of their neighborhood, they found that block after block of what used to be rows of quaint houses were now a field of ash. The occasional burned car frame or unidentifiable metal structure popped through.

They bought sifters and sat on the piles of ash that used to be their home searching for anything that might be left. All they got was a stainless steel belt buckle, but it was something. Steve’s father had made it, and he had died a few years ago.

The housing market in Santa Rosa was tight. The area already had little housing stock available, and it had lost some 3,000 homes in the fires. But Steve and Michele got lucky—they found a place about two miles away that a woman was renting out and wanted to use to help someone who had lost theirs in the fires.

In that house, the Rahmns were able to reestablish some sense of normality—they shopped at the same stores, ate at the same restaurants. The woman was also renting to them at fair market value—a small miracle amid the price gouging in the area as survivors flooded the rental market.

But it wasn’t the same. Steve would walk into a room to grab something and suddenly be hit with the realization, “That’s right, I don’t have that anymore.” They wanted to make pizza one night and realized they didn’t have a rolling pin. They used a can of soup instead.

The routines of daily life became difficult. Steve was having trouble staying focused at work. He’d try to be productive but kept feeling like he was just treading water.

When neighbors light a barbecue, the smell makes Steve break out in sweats.

One major decision weighing on them was whether to rebuild. They had homeowner’s insurance, which meant they were luckier than many. But it would be months before they knew how much they’d get from it.

The hardest part was making the list of every item they’d lost that their insurance broker kept calling to request. It was both tedious and excruciating. If they didn’t know how much they’d paid for each item and how old it was, the insurance company would place its own estimated value on it—usually a fraction of the original price. Every time they sat down to add something to the list, it felt like rehashing what they’d lost.

Then there were the objects they’d never get back—the pictures, their kid’s first artwork.

What Steve missed most were the Christmas ornaments, which he and Michele collected from places they’d vacationed. They were one of those families that went all out with holiday decorations, sending their electric bill soaring to more than $1,000 over the holidays.

Now Steve wasn’t sure he’d ever muster the desire to decorate like that again.

Steve still drove by their property almost every day. Desmond started calling it the “fire house.” He recognized the dirt lot, but Steve suspected he didn’t remember much of the house itself.

Steve and Michele had both lived in the area for over two decades, so they decided to rebuild their house. The insurance money would cover it, and staying meant keeping their community.

Now they had to meet with builders and make decisions about debris removal, floor plans and tiles. Steve worked in construction, so he was familiar with the process at least. For some of their neighbors, all the decision-making was paralyzing.

Others chose not to rebuild, either because they were underinsured, or their relationships had fallen apart during the stress of the recovery or they just wanted to sell the land and move away.

Steve and Michele knew rebuilding in the same spot left them vulnerable to another fire in the future. But what were the odds of fire hitting the same spot again?

With the Mendocino Complex fire, the largest in California’s history, and the Carr fire both raging in the Northern California region, Steve and Michele have been on edge for the past few weeks. The Complex fire is about an hour’s drive away; the Carr fire about four hours. The smoke has traveled down to their area, its smell and haze still all too familiar. Steve can’t stop thinking about the people who are losing their homes right now. Fires seem to be becoming the new normal.

Most days, it all still feels bizarre to Steve. At 50, he never thought he’d be starting over.

The city finally issued them a permit to begin construction a few weeks ago, but everything has been delayed. Most contractors in the area are swarmed with demand and booked up for months. It could be anywhere from six months to a year before their house is fully built.

The lease on their rental home is up in November. They hope to stay on month-to-month, but any insecurity feels unsettling. They know they’re lucky by comparison; some neighbors have had to move two or three times already.

When neighbors light a barbecue, the smell makes Steve break out in sweats.

Even when he’s around friends, it’s hard to explain what they’ve been through. The only people that really get it are those who have been through fires, too.

Most Wednesdays, Steve and Michele get together with neighbors as part of a local survivors’ group, Coffey Strong, to drink wine, share stories and debate which supply house has the best tiles. Every second Tuesday of the month, some of them get together to just walk through the neighborhood and talk, looking at the houses under construction. It feels like a kind of therapy.