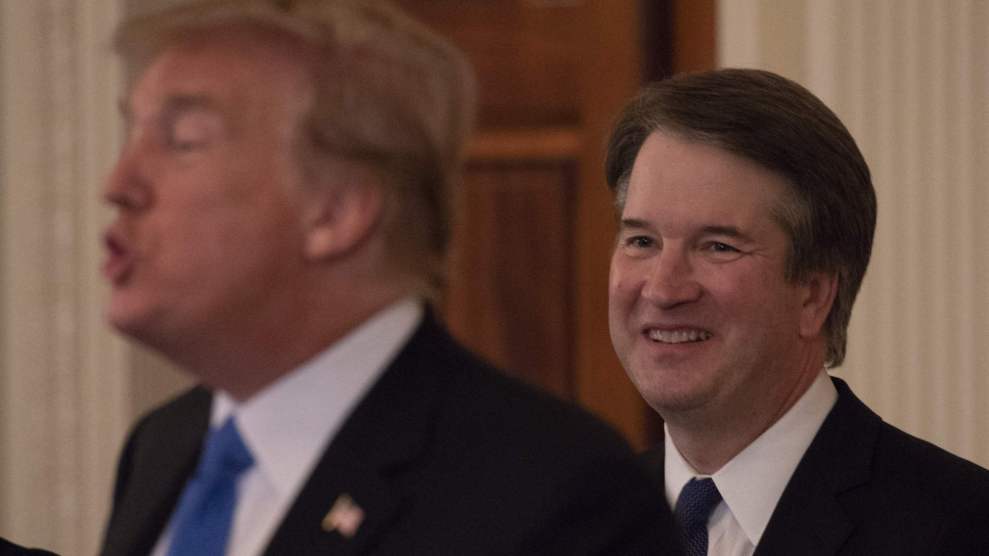 Unlike the president who nominated him to the Supreme Court, Brett Kavanaugh doesn’t hesitate to call climate change a problem. “The task of dealing with global warming is urgent and important at the national and international level,” he wrote in a 2013 concurring opinion for the US Court of Appeals for DC Circuit, where he has served as a judge since 2006. He repeated his concern during 2016 oral arguments on an Obama-era climate policy, saying, “The earth is warming. Humans are contributing.”

Despite this, the leading environmentalists in the Senate draw parallels between Kavanaugh and Scott Pruitt, who was one of the nation’s best-known climate skeptics in his short time in charge of the Environmental Protection Agency.

“Brett Kavanaugh is the next Scott Pruitt,” Sen. Tom Carper (D-Del.) said at a press conference on Capitol Hill on Tuesday, with two of his fellow Democratic senators and representatives from national green groups. “Brett Kavanaugh’s job will be to make sure the legacy of Scott Pruitt, rather than fade away from us, is preserved.” Kavanaugh’s robust decisions over the 12 years he has been a judge, in a court that hears many of the lawsuits against the EPA, “is enough to make Scott Pruitt jealous,” said Sen. Ed Markey (D-Mass.) at the same event.

If confirmed, Kavanaugh’s tenure on the Supreme Court will coincide with critical years for the US and the rest of the world during which they will need to cut its collective greenhouse footprint. The stakes are even higher because he would replace Justice Anthony Kennedy, who was the fifth vote in dozens of precedent-setting environmental cases, including the landmark 2007 Massachusetts vs. EPA decision that became the legal basis for much of the Obama administration’s work on climate change.

Kavanaugh’s record on the DC Circuit suggests he’ll be the fifth vote the court needs to chip away at those precedents in order to narrow the EPA’s authority to act on greenhouse gas emissions and other environmental and water protections. Harvard environmental law professor Jody Freeman notes that his record has been mixed, and he has not always ruled against environmental concerns, observing on Twitter that Kavanaugh seems “persuadable,” and “not dogmatic” on environmental policy. But, she added, he is “generally skeptical of novel or far reaching agency rules & wants Congress to expressly authorize” EPA action.

Ann Carlson, professor of Environmental Law at UCLA, wrote after his nomination that Kavanaugh is “not going to recognize EPA’s power to do much at all to regulate greenhouse gases.” She pointed to one key 2017 opinion he authored in the case Mexichem Fluor, Inc. vs. EPA that struck down the EPA’s ban on hydroflurocarbons, a potent greenhouse gas, and how it reveals his reasoning for restraining EPA’s enforcement capabilities:

“First, EPA’s well- intentioned policy objectives with respect to climate change do not on their own authorize the agency to regulate. The agency must have statutory authority for the regulations it wants to issue. Second, Congress’s failure to enact general climate change legislation does not authorize EPA to act. Under the Constitution, congressional inaction does not license an agency to take matters into its own hands, even to solve a pressing policy issue such as climate change.

In other words, even if Kavanaugh might want the EPA to do something about climate change, he insists the agency is unable to because Congress has not passed legislation explicitly authorizing it to do so. That approach bears a striking resemblance to Pruitt’s reasons for reversing many of the EPA’s climate policies such as the Clean Power Plan and methane restrictions on oil and gas. But it counters the 2007 decision in Mass. vs. EPA, and subsequent decisions, that classify greenhouse gasses as “well within” EPA’s wheelhouse.

With the key fifth vote by retiring Anthony Kennedy, the Justices ruled that the Clean Air Act gave the Environmental Protection Agency the power to regulate greenhouse gas emissions. That case prompted the EPA’s endangerment finding for greenhouse gas emissions—first undertaken by George W. Bush’s EPA—which gives the EPA the authority to justify carbon regulations for vehicles and power plants, and impose restrictions on methane from oil and gas operations.

It’s a powerful tool, which is why reversing the endangerment finding has topped climate change deniers’ wish-lists for the Trump administration. But even if a total reversal is not possible, future Supreme Court court decisions can incrementally chip away at the EPA’s ability to regulate greenhouse gasses, which could similarly satisfy climate change deniers.

Kavanaugh’s skepticism of the EPA’s regulatory authority goes beyond climate change. Another one of his key decisions was his 2012 majority opinion for the DC Circuit that invalidated an EPA program targeting air pollution that crosses state lines. He argued that the EPA went beyond congressional statute in requiring upwind states to make big cuts to their pollution. In 2014, the Supreme Court overruled that opinion, 6-2.

His views on the doctrine known as the Chevron deference, established by a 1984 Supreme Court opinion, also worry EPA supporters. That precedent established that courts should defer to a government agency’s interpretation of a broad law if Congress did not clearly spell out its intention. It’s become the basis for EPA wins in response to subsequent lawsuits against its rules and was the basis of the Obama administration’s defense of its climate policies.

Kavanaugh has been championed by the conservative judicial network, The Federalist Society, which wants to see the Chevron deference disappear. He’s expressed his skepticism on a few occasions. In February 2017, he said in a keynote speech at Notre Dame Law School, “Chevron doctrine encourages agency aggressiveness on a large scale. Under the guise of ambiguity, agencies can stretch the meaning of statutes enacted by Congress to accommodate their preferred policy outcomes.”

Add to all this the fact that Kavanaugh could create one more hurdle that particularly concerns environmental groups and would make their job keeping agencies accountable nearly impossible.

Public advocacy groups have long enjoyed access to the courtroom, and groups such as Earthjustice are concerned that Kavanaugh would attempt to limit the number of the citizen lawsuits that can be brought forward. In order to sue an entity, petitioners have to establish standing in court, and that standing requires that they are able to prove harm from the actions of the business or government agency.

But what qualifies as harm in the case of the environment is trickier than, say, the petitioners who claim they were damaged by the Affordable Care Act. When Trump nominated his first Supreme Court justice, Neil Gorsuch, environmental lawyers saw a judge who had been more willing to toss out cases by environmentalists for lack of standing. They see similar impediments ahead should Kavanaugh be confirmed. The environmental group Earthjustice has already taken Trump and ex-EPA head Pruitt to court on more than 100 decisions, and Kavanaugh could be the key to making sure their policies stay put.

On Tuesday, Earthjustice’s Vice President for Litigation Patrice Simms described the “fundamentally disturbing” idea that Kavanaugh “would like to change the very rules of the game for federal agencies and the rule of the game for courts” in a way that makes it harder for the public to participate in decisions affecting their health and environment. And he added, “He would make it more difficult for people to hold agencies accountable [and] to take them to court when they break the law.”