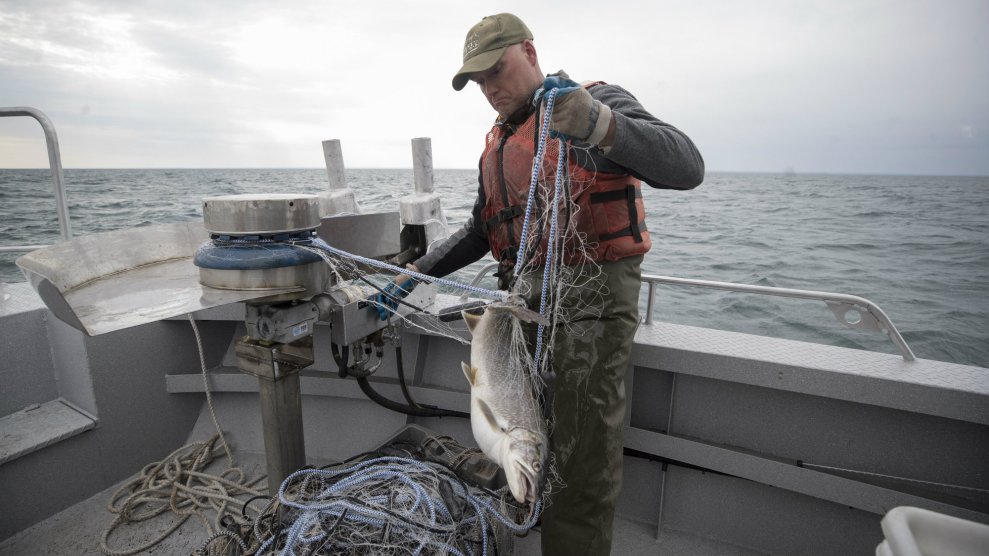 House Republicans on Wednesday voted to weaken a much-praised 1976 law that helped revive the commercial fishing industry in the United States and bring its fisheries back from the brink of collapse.

The bill, introduced by Rep. Don Young (R-Alaska), would remove annual catch limits on numerous fish species and roll back requirements for recovering overfished stocks. Many scientists, fishers and ocean advocacy groups say that will likely result in overfishing.

The legislation passed the House in a 222-193 vote, mostly along party lines. The measure must still be approved by the Senate, although it’s unclear if or when that chamber will take up the bill.

In comments on the House floor before the vote, Young said his measure will strengthen the existing law, the Magnuson-Stevens Fishery Conservation and Management Act, by giving regional fishery councils “the proper tools and flexibility needed to effectively manage their fisheries.” The goal, he said, is to “ensure a proper balance between the biological needs of fish stocks and the economic needs of fishermen and coastal communities.”

The Magnuson-Stevens Act is the primary law governing marine fishery management in federal waters to prevent overfishing and conserve habitat. The law was updated in 2006 with stricter overfishing measures, and over the past 12 years, stocks of fish like red snapper in the Gulf of Mexico have surged. Yet the recreational fishing lobby, which includes boating and fishing gear manufacturers, argue that the systems for determining annual quotas are tilted in favor of commercial fisheries and lead to unfairly truncated seasons and catch limits for private anglers.

“We need to recognize the system. While it’s been working, by and large, pretty darn well for commercial fisheries, there are some significant challenges for recreational fisheries that we need to come to grips with,” Mike Leonard, the conservation director at the American Sportfishing Association, said Wednesday afternoon at a talk in Tampa, Florida.

The recreational fishing lobby wants to relax those rules to allow more anglers to reap the benefits. But commercial fishers warn such a move could devastate the fisheries on which they rely. Gone are the days when most anglers banked on modest vessels, rods and lures, plus good luck. Modern fishing technology allows recreational fishers to catch far more fish, and improved motors and gear make even many modest-size boats seaworthy.

Whereas commercial fishers must adhere to stringent catch limits and face steep fines for going over their quotas, there’s no easy way to police an armada of well-equipped hobbyists and track how many fish they reel in.

Even in the recreational industry, there is a divide. On board the Double Eagle III in the Gulf of Mexico on Wednesday morning, Chad Haggert, who owns a charter boat company in Clearwater, Florida, said the reforms that Republicans proposed would “take fish away from” commercial fishers and a charter fleet with accountability measures and “give them to” private anglers who don’t “have a way to do that yet.”

A number of Democrats said on the House floor Wednesday that a more appropriate name for the legislation―dubbed the Strengthening Fishing Communities and Increasing Flexibility in Fisheries Management Act―would have been the Empty Oceans Act.

“This attempt to return us to the bad old days of a failed fisheries management policy and overfishing that inevitably follows from loose standards should be seen as unacceptable to everyone that cares about sustainable fisheries,” Rep. Jared Huffman (D-Calif.) said.

Jason DeLaCruz, the owner of the sustainability-focused fish wholesaler Wild Seafood in Madeira Beach, said, “‘Flexibility’ is a euphemism for ‘deregulation.'”

Leonard said the American Sportfishing Association doesn’t consider the House bill perfect and suggested companion legislation in the Senate would require changes. He also said he doubts a revamp of the Magnuson-Stevens Act would pass in the upper chamber this year.

“The prospects of a big, broad Magnuson bill coming together in the Senate don’t seem great,” he said. “Magnuson’s not an easy, flip-the-switch type of legislation to get reauthorized in such a compressed time frame.”

In October more than 200 scientists from across the country had signed a letter urging members of Congress to oppose Young’s bill. They said that it would “unwind science-based conservation of US marine fish populations” and that removing catch limits “will hurt our fisheries, our oceans and the US economy.”

The National Oceanic and Atmospheric Administration, the nation’s leading ocean science agency, is considering whether to gut protections for America’s marine national monuments, opening millions of acres of federal waters to commercial fishing. As HuffPost first reported, the agency’s acting administrator detailed the proposed change in a presentation last month. The move is aimed at reducing America’s seafood trade deficit, but critics say it would do nothing to meet that goal and would undermine the primary purpose of establishing marine monuments.

While the United States has succeeded in recent decades in recovering many local fisheries, the global outlook is bleak. Rising global temperatures could cause the world’s fisheries to decline by an average of 20 percent by 2300, according to a study published in the journal Science this year.

Reporting in Florida was conducted while on a fellowship with the National Press Foundation, a nonprofit group that offers educational programs, training and awards to working journalists across the country.