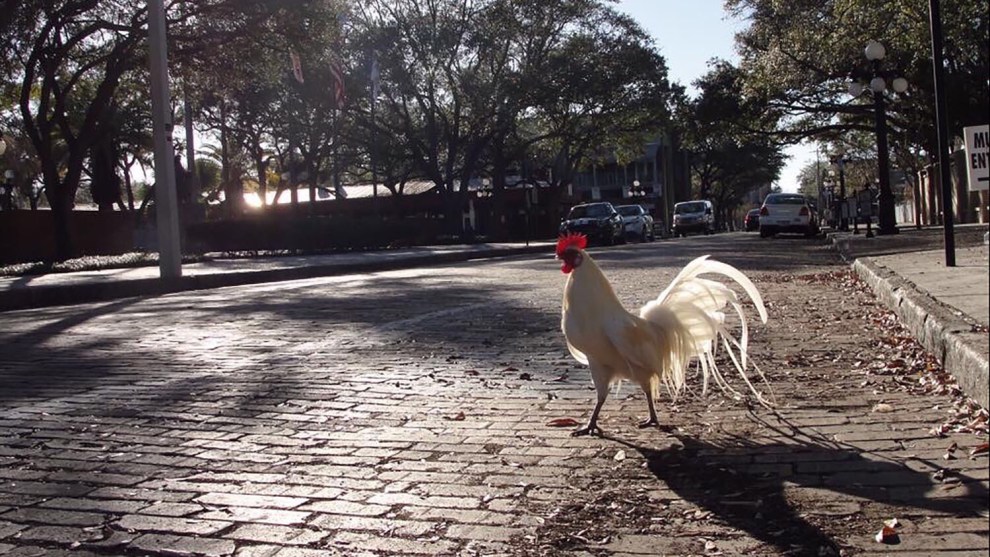 Update 7/19/2018 12:57 PM: ABC Action News reported that the City Council voted against changing the ordinance because of a new report that found lower population numbers than previously estimated, in part due to hawk hunting.

Today, Tampa, Florida’s city council will decide the fate of its feathered population. The city’s Cuban quarter, called Ybor City, has long been home to roaming feral chickens. Smaller in stature and more agile than your ordinary backyard birds, they have have won over tourists and residents alike. But a rise in their numbers—and the mess and racket to go along with it—has sparked a debate about whether the birds deserve special protections.

Listen to the radio version of this story on this episode of our podcast Bite, starting at 17:40:

According to local lore, the chickens can trace their roots in the area back to the late 1800s and early 1900s. “There was a migration from Cuba to Key West to work in the tobacco factories and the people who made that move took chickens with them,” says Dylan Breese who founded the Ybor Chicken Society in 2017. After a fire decimated the tobacco industry in Key West, many of the Cuban immigrants made their way to Tampa’s Ybor City—and the chickens came too. “They used them for obviously, food, meat, and eggs, but also cockfighting and some as pets,” Breese explains. (Though there’s some debate about the animals’ origins; the owner of a Jamaican restaurant recently claimed that he brought the chickens over from Kingston, Jamaica.)

Tampa has long been designated a bird sanctuary by a city ordinance that protects everything from waterfowl to migratory birds—including the chickens.

Breese and other members of the Ybor Chicken Society work to facilitate the birds’ relationship with business owners and residents. They also protected the chickens when Hurricane Irma hit by safeguarding around 50 birds and 40 eggs in a warehouse during the storm.

Tampa has long been designated a bird sanctuary by a city ordinance that protects everything from waterfowl to migratory birds—including the chickens. In 2013, the ordinance was extended to cover backyard chickens that were no longer wanted or had wandered off, since those chickens are not raised for meat.

But Tampa is growing rapidly, and the number of chickens roaming about is too—Breese estimates that the population is about 300. All the new development has spurred the birds to seek out new territory. And according to some residents, the roosters are making more of a racket.

“They’ll start crowing at three, four o’clock in the morning,” says Tony LaColla, a former member of the local Hillsborough County Planning Commission and former president of the Historic Ybor Neighborhood Association. “They’re part of the neighborhood—I agree with that. However, with any animal population, there has to be some control.”

The Chicken Society described those complaining about the roosters as a “small, but loud” bunch, comprised of newcomers to the city who don’t understand or care about the area’s history.

LaColla noted that along with the nighttime rooster crowing, which he thinks is due to the district’s well-lit nightlife scene which keeps the birds awake, the chickens dig up landscaping. The Tampa Bay Times reported that Councilman Frank Reddick, whose district covers Ybor City, dealt with a particular chicken that rooted up his flowers and made a mess of his yard.

Both LaColla and Breese mention that the increase in the chicken population could have to do with an uptick in “drop-offs”: When people buy eggs to raise backyard chickens and accidentally get a rooster, they dump them in Ybor. (It’s probited to keep backyard roosters). Councilman Harry Cohen, who’s running for mayor this year, also suspects that those drop-offs might be inflating rooster numbers. “In recent years, the rooster population appears to have multiplied” said Cohen. “At this point, the concerns have to do with them making a mess and being very loud.”

Since June, the city council has been discussing ways to deal with the multiplying roosters. So far, suggestions have included rooster birth control, finding ways to re-home the roosters, and adjusting the city ordinance that protects them. The Chicken Society “wants a solution that keeps the protections in place for all of Tampa’s living birds,” Breese told Mother Jones in a Facebook message. He says he is open to the idea of adjusting protections for their nests and eggs if absolutely necessary.

The roosters, meanwhile, seem to have quite the fan-base: More than 2,000 people signed a YCS petition to keep them included under the city ordinance.

“If development is allowed to go on unchecked, if it’s flooded with people who don’t understand what makes this neighborhood great, [Ybor City] is going to end up looking like every other neighborhood in Tampa,” says Breese. “Nothing against those neighborhoods, but it’s really amazing that we have something so different and so special here in Ybor City. The chickens are definitely a big part of it.”