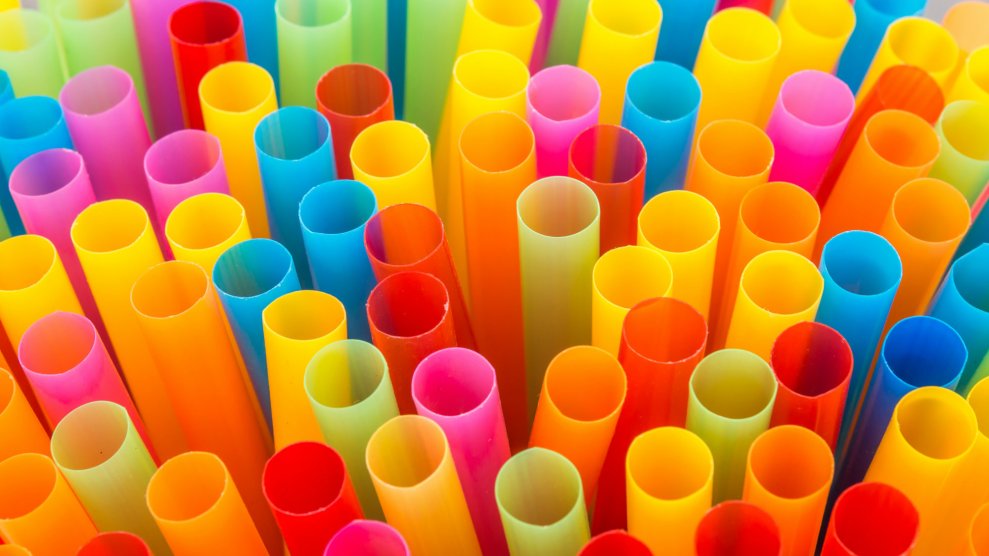 But, like everything else that’s easy, cheap, and pleasurable, using a straw is fundamentally wrong. Straws consume a lot of energy to produce and distribute for vanishingly little purpose. Billions wind up in the trash without ever being opened. They’re too light to be reliably recycled; tons of them find their way into the ocean. Straws that don’t end up spiraling in awful trash gyres or clogging sea turtles’ sinuses wash up on the beach, where they’ll outlive us all.

Straws that don’t end up spiraling in awful trash gyres or clogging sea turtles’ sinuses wash up on the beach, where they’ll outlive us all.

June 5 was the UN’s World Environment Day, whose theme this year is “beat plastic pollution,” so it’s a good time to point this out. Stirrers and straws were the fifth-most common type of debris picked up along the California coastline, according to a cleanup count conducted by Upstream, an organization devoted to getting rid of single-use and disposable plastic packaging. No one pays the hidden costs tucked in each individually wrapped straw.

It’s enough to make you pause as you open a straw and plop it into your iced coffee. It does not, however, appear to be enough to make you stop using straws. Hence the straw backlash: Communities nationwide are now attempting to use stronger means to limit Americans’ profligate suckage.

This would be a different story if we actually needed straws, but, beyond disabled communities and the elderly, most humans can drink without a straw just fine. True, it’s harder to sip while simultaneously doing other stuff, like zip-scooting the boardwalk, or parasailing the bay, or hopping sand dunes in a bitchin’ jeep, without one. But in general, straws are a solution in search of a problem.

Probably nobody knows just how many straws Americans consume, but one very popular guesstimate is 500 million. That’s half a billion pairs of puckered lips sucking on plastic every single day, a number greater than the U.S. population. But it turns out that this figure was invented by a precocious 9-year-old: As Reason reports, Milo Cress, the founder of a campaign called Be Straw Free, conducted a phone survey of single-use straw manufacturers in 2011, when he was of single-digit age. That hasn’t stopped environmentalist virtue-signaling types (and major media outlets) from citing the 500 million number at every opportunity.

If my own straw consumption is any sign, though, that figure is a preposterous undercount. There are more stars in the sky than grains of sand on the earth but whoa, I use so many straws. Sure, I could do my part by carrying around a trendy stainless steel eco-straw (and accompanying tiny brush), along with my clay bowl and wooden spork everywhere I go—like a good itinerant barefoot hedge-monk—but so far, well, I have not done that. It doesn’t take a sailboat trip trawling for trash in local waterways to see that there’s a major problem, though. With more than a little shame, I acknowledge my role in this crisis, as well as my deep-seated unwillingness to redirect my daily routines to help solve it.

There are two paths for getting over straws: disruptive tech or paternalistic regulation. So far, neither has forced Big Straw to bend.

Luckily, some jurisdictions are willing to legislate the moral behavior that I am unwilling to freely adopt. There are two paths for getting over straws: disruptive tech or paternalistic regulation. So far, neither has forced Big Straw to bend.

Regulatory efforts to ban or curb the ubiquitous single-use straw are gathering steam in all the places you’d expect, and a few you might not. A California state bill that prevents restaurants from offering straws to diners unless they specifically ask for them passed the Assembly last week and will move forward to a Senate vote. Punny campaigns against straws include “Straw Wars” in London and “Straws Suck” in Vancouver. Less smirky pushes include a single-use straw ban proposed for New York Cityor a sweeping edict against all plastic dinnerware in France.

A well-received 2017 documentary on straws may be greasing the regulatory wheels. In Florida, the cities of Surfside, Fort Myers Beach, and St. Petersburg have banned single-use straws, and Miami Beach might expand its limited ban this year. The downside to local regulation, of course, is state preemption, as drinking-straw laws are the kind of easily-mockable nanny-state regulations that tend to draw conservative and libertarian ire. (There may be a class dynamic in the straw standoff, too, with Nalgene-toting elites squaring off against Big Gulp-carrying red staters in yet another front of the culture wars.) A Florida state senator has floated an amendment to preempt local municipalities from banning plastic straws or utensils, in an effort to safeguard Floridians’ freedom to suck. The state has already banned any city from banning single-use plastic containers.

Unfortunately, it must be said that current straw alternatives leave much to be desired. Biodegradable straws made of paper or hay pose a specific problem for disabled people who rely on straws, since paper straws don’t handle hot liquids or soups very well. They’re also more expensive to produce than plastic straws. On the tech front, one startup proposal for a collapsible reusable straw has raised $1.8 million in pledges from 38,000 backers. FinalStraw works like a spring-loaded tube that fits into a carrying case a little larger than a car key fob. While this fix is a bit bigger than pocket sized, it has the advantage of being extremely visible during lunch, a boon to any ostentatious environmentalist.

It might be best if straws would just go away—not out-of-sight-out-of-mind, but off the table entirely. But that may be a tall order: Straws are as old as civilization. The first-known straw was discovered in a Sumerian tomb dated 3,000 B.C., a gold and lapis lazuli number that would make a fashionable and sustainable choice for today’s carbon-footprint-minded consumer. Although the first (paper) straw patent was issued in 1888, the straw only truly found its stride in the 1930s, when Joseph B. Friedman invented the bendy straw for improving milkshake circulation.

While the flexible straw has enjoyed nearly 80 years of dominance, one restaurant management company declared last week that it will stop supplying plastic straws at its more than 1,000 campus and museum cafe locations. It may be too much to hope that corporate ethics will come to the rescue: McDonald’s is experimenting with compostable straws in the U.K., but shareholders recently voted against conducting a study on single-use plastic straws for other markets. Not a ban—a study.

Until the tide turns against plastic straws, plastic straws will continue to turn up in the tide. The best answer for single-use plastics may be all the answers: taxing or banning these disposables, eliminating car trips in which an iced latte makes oh-so-much sense, and generally trying to use your lips and tongue when circumstances permit. Even design and aesthetics have roles to play, in building straws into reusable water bottles or making standard glasses and ceramic mugs trendy again.

In any case, the straw’s position is slipping. Disrupting all the circumstances in which a straw is a given, not merely an option, is at least a possibility that’s out there now. Next year, straws might be just a little bit less inescapable than they are today, a little more taboo. If there’s one thing that’s utterly necessary every summer, after all, it’s the ocean.