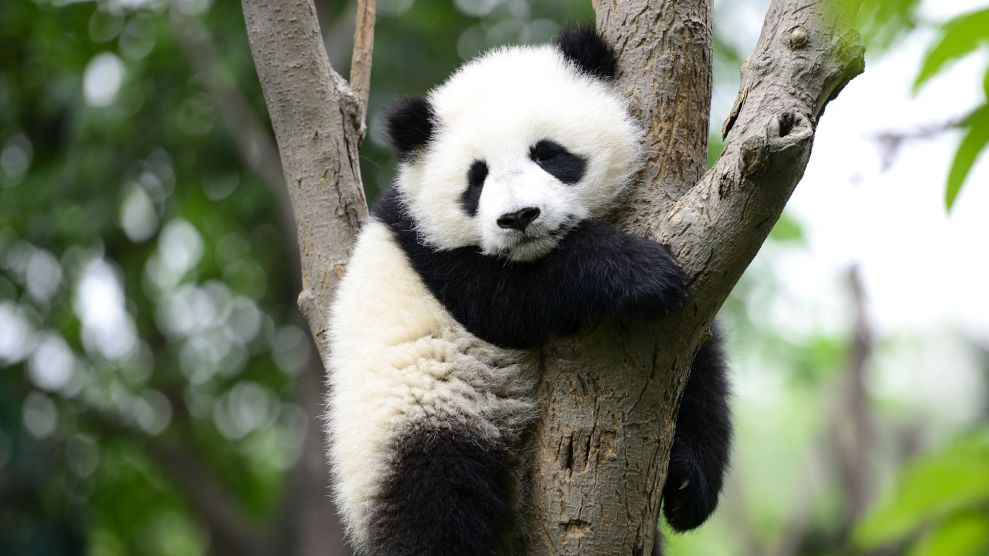 Believe it or not, there’s a battle happening among conservationists over the Giant Panda. Though an undoubtably iconic species for environmentalists—and the highly recognizable symbol of the World Wildlife Fund for half a century—some argue that all the dollars funneling into panda conservation are, simply put, not worth it. With fewer than 2,000 pandas left in the wild, some experts have called for the panda to be left to die out, while others have argued that preserving the species, and its image, will help fuel conservation efforts across the board.

Now, a new study led by a group of Chinese researchers proves the haters wrong. Panda conservation has huge benefits, the group found, beyond just saving pandas themselves. Their research was published Thursday in the journal Current Biology.

Their findings are based on the fact that the panda is an “umbrella species,” meaning other species benefit from its survival. Golden monkeys, snow leopards, and yellow-throated pine martens, for example, are all beneficiaries of protected panda habitat. And, this study shows, people benefit too.

Protecting these iconic animals also means protecting the land and resources reserved for them. Water, timber, and fuel, for instance, can be sourced from panda habitat, and the land also provides increased soil fertility, biodiversity, and flood prevention. Then, of course, there are the cultural benefits, including recreation and tourism. All these factors are like the “gross domestic product” of the forest, the authors write, and arguably only exist because of the panda. Taken together, the species is worth each year about as much as billionaire Charles Schwab, Steven Spielberg, or even Donald Trump: somewhere between $2.6 and $6.9 billion per year. And for people wondering if the conservation efforts are wasteful when it comes down to the numbers, the study found its real value is 10 to 27 times higher than the cost of maintaining pandas’ reserves.

“In endangered species conservation, we often come to the question, ‘Is it worth it?’ How much should we invest in saving a single species?,” Ronald Swaisgood, a panda ecologist with the San Diego Zoo and an author on this study, tells Mother Jones. “There have been some who have suggested it’s not worth it, that we should not spend all this time and effort in trying to bring back a single species…The take-home message [of this study] is, it is worth it. It’s worth saving these endangered species because we benefit and nature benefits.”

To get their numbers, the researchers mapped out the value of different “ecological services” provided by the world’s panda reserves, all of which are in China. They found that, on average, one hectare (about the size of a football field) of panda habitat provides $632 of value. Across all 67 panda reserves in the country, that came out to be a valuation of several billion dollars in 2010. The panda’s value also increased over the past four decades, jumping from $963 million in 1980, the researchers estimate, to more than a billion dollars per year in 2000, and nearly doubling in the following decade.

What’s more, conservation efforts are bringing pandas, once an endangered species, back. “The panda is starting to recover as a result of this investment,” says Swaisgood. “The panda numbers are up, the range is expanding and improving. It shows we can win this. It does make a difference for the pandas, and also, this shows, it makes a difference for the value to humans as well.”

If this wasn’t good news enough, just check out these cute panda photos: