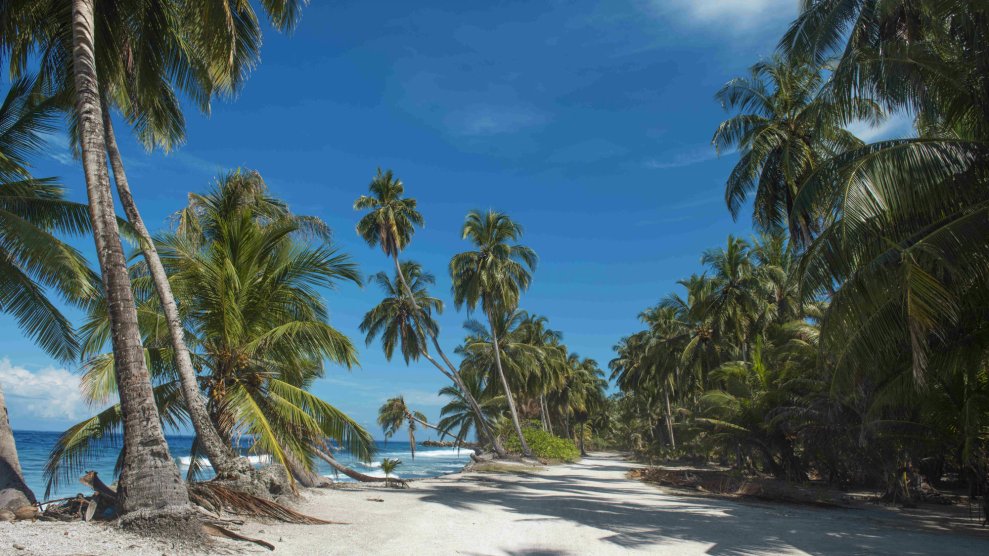 In a tiny nation that will likely be underwater due to sea level rise within the next century, an American luxury hotel chain is constructing an underwater hotel room that the world’s wealthiest will be able to reserve for $50,000 a night. No one seems to have noticed the irony. But it’s hard to imagine a more perfect example of the way we think about climate change: a scary thing that will happen at some point in the future but not a problem worth mentioning in the present.

When you search for the Maldives, a country composed of 1,192 islands that speckle the Indian Ocean southwest of Sri Lanka, on Google Maps, the names of the biggest islands appear in a blank sea. You have to zoom in to identify the minute slivers of land that are home to a population of 400,000. Soon even these slivers will be gone. With an average elevation of about 4 feet, and with literally zero hills or mountains, the Maldives is the world’s lowest-lying country. It will not survive the sea level rise caused by anthropogenic climate change.

In 2009, then-President Mohamed Nasheed tried to broadcast the plight of the Maldives by holding what he called the world’s first underwater Cabinet meeting. Nasheed and several high-ranking government officials donned wetsuits and scuba gear, dove down 20 feet to the ocean floor, and, using hand signals and white boards to communicate, signed a document urging all of the world’s countries to cut carbon emissions. Should the world fail to control climate change, they implied, the Maldives would only be able to conduct its business underwater. This piece of political theater served as a metonym for the problem of climate change, a small and globally weak nation trying to publicize its environmental trauma in universally comprehensible terms.

This piece of political theater served as a metonym for the problem of climate change, a small and globally weak nation trying to publicize its environmental trauma in universally comprehensible terms.

Amazingly, the hotel press release made no mention of Nasheed’s stunt, nor of the climate vulnerability of the Maldives, in its announcement of what the hotel is calling the “world’s first undersea residence,” which will open in November of this year. Built into the ocean floor 16 feet below sea level, the residence, called the “Muraka,” will include a glass-walled underwater suite with views of the Indian Ocean and its rainbow of marine life. The upper level of the residence will sit on the water at current sea level and will boast 360-degree water views from the vast deck that includes, inexplicably, an infinity pool.

The residence was designed solely to “deliver innovative and transformative experiences to our global travelers,” according to the hotel press release. (The Conrad chain that built the hotel is owned by the Hilton family of hotels.) The hotel has no social mission (a press representative for the hotel declined to comment for this story). It is not donating any portion of proceeds from the room to a climate adaptation fund. Neither the hotel itself nor any of the travel reporting that followed news of the underwater residence acknowledges that the planet is warming, that sea levels are rising, and that the optics of an extravagant underwater hotel room are less than ideal. Perhaps that’s because the Conrad Maldives Rangali Island already operates Ithaa, the world’s first underwater restaurant, off the shore of the same island.

I research and teach the literature of climate change. I have used John Shenk’s 2012 documentary on Mohamed Nasheed’s presidency and climate activism, The Island President, to illustrate to my students how people are constructing narratives of climate change and its related disasters. We discuss the benefits and drawbacks of the way Shenk personalizes the abstract problem of climate change by shaping it around the quest of a single man. We observe the way his camera lingers on waves eating away at eroding beaches, examples of climate destruction. Shenk also films high-level meetings with government staff, so viewers get to eavesdrop on Maldivians forming their story about their precarious position. “The reason that Maldives is unique is that we’re going to lose an entire nation, and identity, culture, all these things,” says Aminath Shauna, then the president’s climate coordinator, in one scene. Other countries will suffer, she says, but the Maldives will disappear.

“The reason that Maldives is unique is that we’re going to lose an entire nation, and identity, culture, all these things.”

I am not the only one who was stirred by this message: The Maldives has become such a prominent example of climate vulnerability in academic circles that my colleagues in environmental studies simply did not believe me when I told them that the Conrad designers were not thinking about climate change when they dreamed up their underwater luxury zone. One had assumed Muraka was an example of ecotourism, meaning it must be catering to tourists interested in not only experiencing a local ecosystem but in potentially aiding in its conservation. Another half-jokingly said the Muraka must connect to climate change, because “climate change is the only reason anyone has heard of the Maldives.”

While those of us who follow environmental issues—including me—have likely only become familiar with the Maldives because of its real and symbolic associations with climate change and sea level rise, environmentalists are not the only outside group to take a single-minded interest in the Maldives. The luxury travel industry also pays attention to this tiny country, which in some circles is known primarily for its over-the-top hotels and resorts. “You’re not in the Maldives to explore a new country,” writes a flippant Bloomberg Pursuits reporter in a piece on the Muraka. “You’re there to feel like the world’s most glamorous castaway. Your hotel room is your destination; you’d better pick a good one.”

Both groups—the environmentalists and the luxury travelers—fall into the same trap, what Chimamanda Ngozi Adichie famously calls the danger of “the single story”: the environmentalists see the Maldives only as a place that is tragically vanishing due to the ravages of global climate change; the travelers see the Maldives only as a bunch of fancy hotel rooms plopped on pretty islands.

Travelers get their story from the highly polished global travel industry, which presumably doesn’t want its customers worrying about sea level rise or political unrest while enjoying their high-end vacations. For a time, we environmentalists got our story from the Maldivian government. In 2008, after several stints in jail as a political prisoner, Mohamed Nasheed became the first democratically elected president of the Maldives and immediately made climate change its keystone issue. He founded V20, a coalition of nations particularly vulnerable to climate change; he spoke at rallies alongside 350.org co-founder Bill McKibben; he convened the aforementioned underwater Cabinet meeting. He singlehandedly put his disappearing country on the environmentalist map. But in 2012, Nasheed was forced to resign in what he claimed was a coup; he was sentenced to 13 years in prison and now lives in exile. Maldivian climate activism vanished along with him. The current president, Abdulla Yameen, is a relative of Maumoon Abdul Gayoom, the autocratic ruler who held power in the Maldives for 30 years before Nasheed was elected.

Yameen cares much more about developing the Maldives now—including its thriving tourism industry—than about preparing the islands for a climate changed future, either by urging the world to reduce carbon emissions, building sea walls to reduce erosion and flooding, or purchasing land abroad to serve as a future home for Maldivians who will be displaced by sea level rise. Some recent on-the-ground reporting and ethnographic research suggests that many Maldivians have long accepted this approach, favoring unrestrained economic and technological advances over Nasheed’s long-lost pledge to make the Maldives the world’s first carbon neutral country by 2020. Sea level rise is perceived as a chronic problem that the country needs to address but not as the existential crisis it is.

In this atmosphere, projects like Hulhumalé, an artificial urban island that is being built near the capital city of Malé, are thriving. The island hosted 40,000 residents in 2016 and will become home to about 240,000 people by the time it is completed in the 2020s. Most of the new inhabitants will be from Malé, the population of which is outgrowing its island capacity, or undeveloped Maldivian islands who need the benefits of an urban economy. Notably, the project is not funded by the global climate adaptation funds to which the Maldives has access but rather by a combination of capital from the Maldives government and foreign investors—overwhelmingly Chinese—who are seeking a profit. The developers’ literature on Hulhumalé does mention a few climate keywords like sustainability, resilience, and adaptation, but it does not frame itself as the solution to the country’s dilemma.

We traffic in the same willed ignorance here in the states as we continue to build expensive condos in Miami and pump floodwater from the low streets of Norfolk, Virginia. Like the Maldives, the American ability to fight climate change as a nation depends almost entirely on who inhabits the offices of the executive branch. Obama and his Environmental Protection Agency attempted to regulate carbon emissions and cooperate with global mitigation efforts; Trump and his EPA are trying to overturn carbon regulations and pull us out of global climate agreements. It is breathtaking to think that we cease acting on an issue that will plague the world for many millennia based on the personalities of men who hold power for mere years.

When Mohammed Nasheed represented the Maldives at the 2009 United Nations Copenhagen Climate Change Conference, he tried to fight for an agreement that would reduce atmospheric carbon to 350 parts per million of carbon dioxide in the atmosphere, which would limit global temperature increases to 1.5 degrees Celsius. This was the ceiling he needed to keep his country above water. In 2013, the year after Nasheed was forced to resign, readings of more than 400 parts per million—the number scientists widely regard as a threshold for inevitable disaster—were recorded for the first time. On May 2, 2018, the National Oceanic and Atmospheric Administration recorded a reading of 409 parts per million at Mauna Loa, Hawaii. Maybe the Muraka residence will do some good after all: We may soon need the technology to build many more residences at the bottom of the rising sea. Let’s hope they can make it cost-efficient.