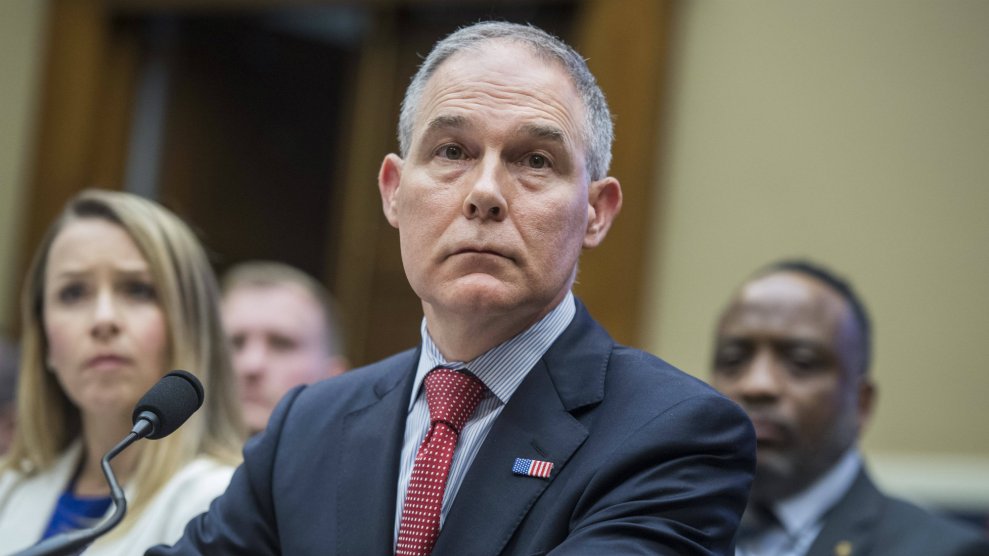 Environmental Protection Agency Administrator Scott Pruitt walked in smiling when he arrived for his House Energy and Commerce subcommittee hearing that was ostensibly about the EPA budget but was dominated instead by questions about his ethics and conduct during his 16 months at the agency.

Pruitt knew he’d face questions not just from Democrats, but from his own party, about his cozy ties with energy lobbyists, his alleged retaliation against EPA staff, his decision to block press from covering his agency, and his recent move to limit the scientific studies the EPA can rely on for its regulations—among dozens of other scandals. Even his staunchest ally, Sen. James Inhofe (R-Okla.), expressed concern about reports of his behavior as Oklahoma attorney general.

So how did Pruitt defend himself? While he admitted that he is ultimately responsible for what goes on at the EPA, he shifted blame to his critics and the media and yet never specifically refuted any of the charges in his broad-brush rebuke of the reporting.

“Those who have attacked the EPA and attacked me are doing so because they want to derail the president’s agenda,” Pruitt told the lawmakers. “I’m not going to let that happen.”

“Those who have attacked the EPA and attacked me are doing so because they want to derail the president’s agenda. I’m not going to let that happen.”

Pruitt went on to criticize the “tough media reports” the past few weeks. “I have nothing to hide as it relates to how I run the agency in past 16 months. Facts are facts and fiction is fiction. A lie doesn’t become true just because it’s on the front page.”

Over the course of his tenure, Pruitt has been engaged in a continuous battle against the press with tactics of limiting media access that echoes the approach from the White House. The most recent example was on Tuesday, when Pruitt announced a science rule that has major implications for EPA regulations. Pruitt and the conservatives who filled the audience at the EPA praised the announcement as a step forward for transparency, while blocking reporters from attending the live-streamed event.

In his opening statement, subcommittee ranking member Rep. Paul Tonko (D-N.Y.) dug into Pruitt’s “political ambitions, your tendency to abuse your position for personal gain,” and “a lack of respect for American taxpayers.” Republicans were slightly less critical of the administrator, praising his policy decisions such as his recent move to limit science at the EPA. Still, they couldn’t overlook the hard evidence and documents showing his expensive habits.

“It is no secret that there have been many stories in the press about the management and operations of the Agency and your dealings with potentially regulated sectors,” subcommittee chair Rep. John Shimkus (R-Ill.) said. “I consider much of this narrative to be a distraction, but one this committee cannot ignore.” House Energy and Commerce Chair Greg Walden (R-Ore.) expressed similar concerns: “I am concerned that the good progress being made on the policy front is being undercut by allegations about your management of the Agency and use of its resources. These issues are too persistent to ignore and I know many members are looking of more clarity from you today.”