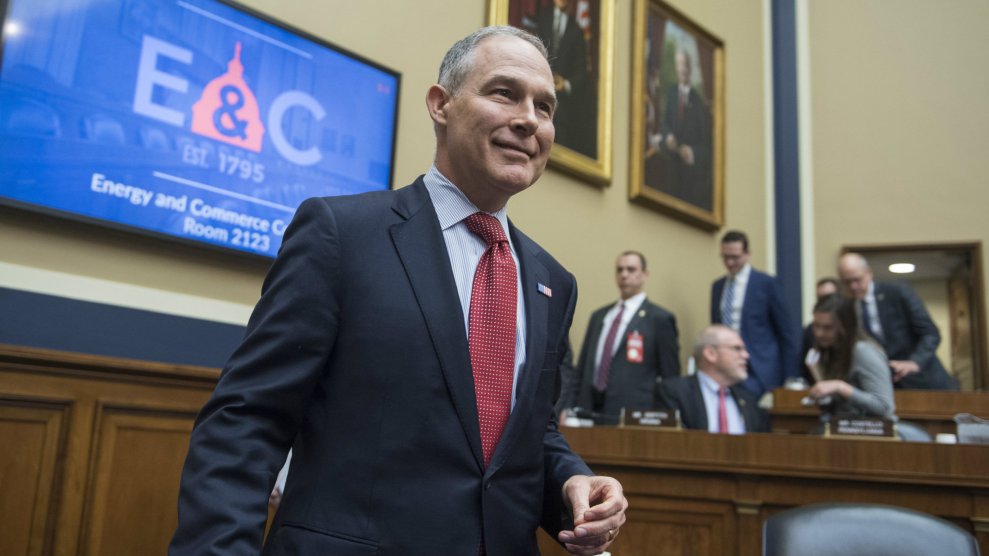 Environmental Protection Agency administrator Scott Pruitt made a strong assertion of  his ultimate responsibility for what goes on at the EPA when he made his opening statement to the House Energy and Commerce subcommittee, in a hearing that was dominated by questions about his ethics.

“I have nothing to hide,” he said. “The responsibility for identifying and making changes rests with me and no one else.”

But Pruitt spent much of the remainder of the three-hour hearing shifting the blame to EPA career employees, his environmental critics, and the media. He distanced himself from all of the controversies on his watch. “I am not aware,” became his favorite refrain.

Asked about the $43,000 soundproof phone booth he had built in his office (the cost of which ballooned from the original estimate), Pruitt said that career staff had made all the decisions without his knowledge.

Pruitt blames career staffers for $43000 phone booth: He asked for secure booth, but the expenditure “I did not approve. Career officials at the agency took that process through … I was not involved. If I’d know n about it I would have refused it”

During House Commerce hearing @repdianedegette asks @EPAScottPruitt if he or any of his staff knew his glass phone booth was a violation of law, Pruitt says no and that he is not aware if he will be recieving any internal penalties from #EPA.

The Atlantic reported that Pruitt had personally signed off on raises for two of EPA staffers he knew from his Oklahoma days, after the White House rejected the raises. The raises were approved under Safe Drinking Water Act. But when Rep. Paul Tonko (D-N.Y) asked about it, Pruitt replied, “I’m not aware if she was hired under that Drinking Water Act authority.”

Pruitt is refusing to give direct yes/no answers to @RepPaulTonko.

Asked if he knew about the political appointees raises, he skirts the question, then admits: “I was not aware of the amount nor was i aware of the bypassing or PPO process not being respected.

Under Pruitt’s watch, the EPA’s enforcement penalties against polluters has dropped by 49 percent compared to his predecessors. Pruitt said he was not involved in one fine against a seed company that was reduced from $4.9 million to $150,000. Pruitt had hired Jeff Sands, a former Sygenta pesticides lobbyist as a senior adviser at the EPA.

Admin @EPAScottPruitt says that he was not involved in the decision to reduce a fine to seed company Syngenta for exposing workers to chemicals despite appointing Jeff Sands as senior agricultural adviser who was a former lobbyist for the company. pic.twitter.com/x95qeKQDlh

Then there were the reports that Pruitt had retaliated against multiple staffers who questioned his spending requests:

Pruitt is refusing to give direct yes/no answers to @RepPaulTonko.

Pallone asks if Pruitt has retaliated against staffers who questioned standards or regulatory rollbacks.

Pruitt: “I don’t ever recall a conversation” about that.

Pruitt says there is “no truth” to the reports that some EPA employees have faced retaliation after disagreeing with his spending or management decisions. “I’m not aware of that ever happening,” he said.

Pruitt hired a banker, fined and banned from the industry by the FDIC for life, to lead a Superfund taskforce. That banker, Albert Kelly, was head of the bank that loaned money to Pruitt for one of his Oklahoma homes. Asked if Kelly would come before Congress, Pruitt repeated he didn’t think he had the authority to compel it.

Pruitt says he isn’t sure he has “authority” to direct Albert Kelly to testify before the committee but could recommend it. (banned banker whose bank loaned him money in OK who now leads Superfund program)