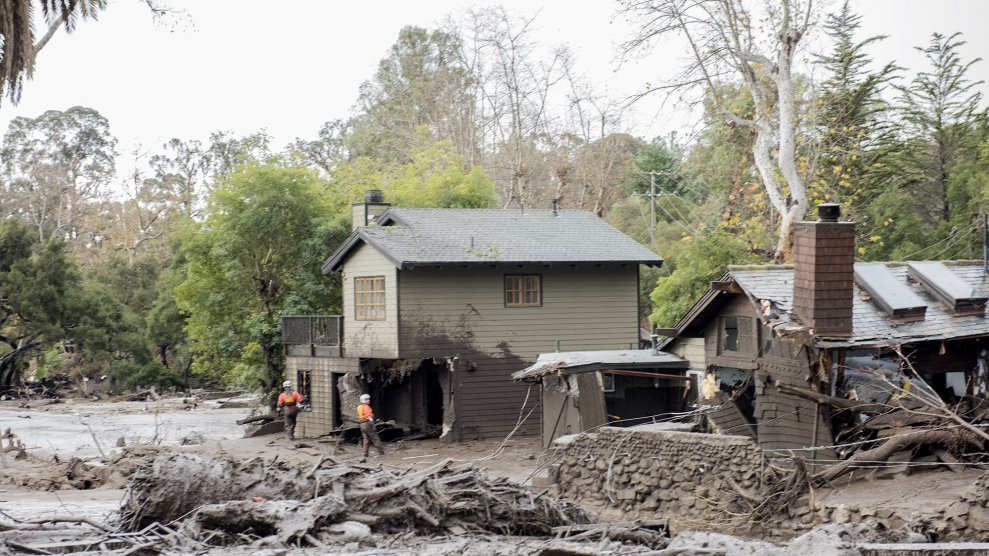 Montecito is coming back to life this morning. The 9,000 person town to the east of Santa Barbara has been empty since Tuesday, when mandatory evacuations forced residents out of their homes for the fifth time in four months.

This week it was a channel of tropical moisture called the Pineapple Express, dumping bands of intense rain and triggering flash floods throughout Southern California. In January it was a once-in-a-200-year storm that dropped half an inch of water in five minutes, unleashing massive mudslides that ripped houses from their foundations and killed 27. In December it was the deadly Thomas Fire that incinerated 280,000 acres—the largest wildfire in California history.

To some, Montecito might just seem like a town hit by a string of superlatively bad luck. But to people crunching the numbers it looks less like an outlier and more like an inevitability of climate change. If you want to see what California looks like in the future, you don’t need a crystal ball. You just need to hop on the 101 and drive until you hit Montecito.

If you want to see what California looks like in the future, you don’t need a crystal ball. You just need to hop on the 101 and drive until you hit Montecito.

Of course, you’ll have to wait until the weather clears up. For the last few days, a plume of tropical moisture carrying as much water as the Mississippi River has been wringing out between four and nine inches of water along the coast and in the foothills. According to Daniel Swain, a climate scientist at the University of California Los Angeles, that’s nothing unusual. In fact, it’s what he would call a “textbook “atmospheric river. So why all the fuss? “It’s not the strongest atmospheric river we seen in a long time,” says Swain. “But it’s aimed directly at these burn scar regions which are incredibly vulnerable to flooding and debris flows.”

He’s not exaggerating. If you look at a satellite image of the plume, it’s pointing straight at the 280,000-acre bullseye left behind by the Thomas Fire. That’s bad because fires destabilize the landscape. Without vegetation to hold back the soil, even a little bit of rain on the hills can have huge consequences. A lot of rain can turn things deadly, like it did in January. Slabs of boulders, rocks, downed trees, even wrecked cars careened down the slopes, carried by waist-high mudflows. More than 100 homes were destroyed. Power was out for days.

When the new round of evacuation orders came, the town was still recovering. On Thursday Montecito sent an excavator out to clear areas where debris was still piled up from the last flow, to prevent creeks and other outflows from sending it further downstream. With the National Weather Service predicting this storm to be even worse, local officials went door to door to make sure people got out and stayed out until the flash flood and mudslide risks subsided. But the question evacuees were asking each other Thursday night wasn’t “when can I go home?” But, “how many more times is this going to happen?”

But the question evacuees were asking each other Thursday night wasn’t “when can I go home?” But, “how many more times is this going to happen?”

Obviously no one can know for sure. But the science suggests that every aspect of California’s drought-to-deluge cycle is intensifying in the face of climate change. Even the Pineapple Express.

“In a future world you do see an expansion of this subtropical jet, which drives these southern atmospheric rivers, based on the models we’re using” says Christine Shields, a climate scientist at the National Center for Atmospheric Sciences. “What that has meant in the projections is that these events become longer lived, carry more precipitation, and have a stronger impact.”

That’s because as the atmosphere warms up, it’s able to hold more and more water, known in weather nerd circles as the Clausius-Clapeyron relationship. This doesn’t affect the total amount of rainfall, necessarily. That’s more a function of how long the storm sticks around, which can be affected by surface wind and other pressure dynamics. But more water in the atmosphere does mean more intense precipitation—higher rainfall rates. And that’s the one that matters in California. “In these areas decimated by wildfires you may only get two inches of rain, but those two inches fall in half an hour,” says Shields. “That could be devastating.”

Understanding climate change’s impacts on precipitation intensity is an area of active research, including by Swain’s group at UCLA. He couldn’t speak to their latest findings because they’ve already been accepted for upcoming publication. But he did note that as climate change deals out more extreme weather events, scientists have a stronger financial case for running the kind of computationally expensive models groups like his use to translate global scale dynamics into regional predictions. “The present event is a really good example of why details matter,” he says. “We got the strength right but if the position is off by even 100 miles, that’s a huge difference for who gets impacted.”

This time it might have been the people of Montecito, and this time the storm might have passed without turning the hillsides into a deathtrap. But that’s the thing about California; there’s always another drought and another fire and another flood around the corner. Which means in the Golden State, it’s always evacuation season.