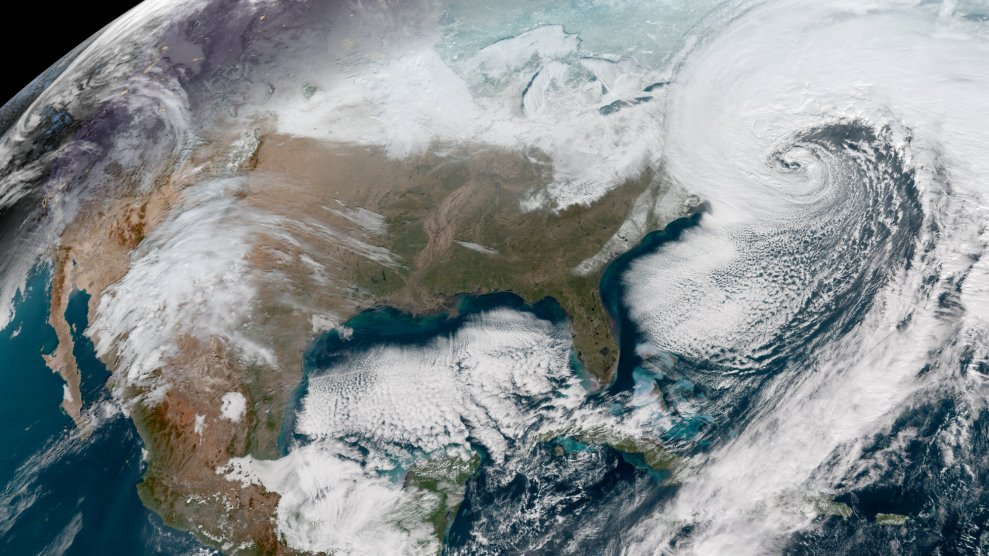 A National Oceanic and Atmospheric Administration satellite captured a deepening storm off the East coast of the United States on Jan. 4, 2018.NOAA

The infamous bomb cyclone may be back. Winter Storm Riley, set to slam into the East Coast this weekend, is predicted to be the most powerful storm since January’s bomb cyclone—bringing hurricane-strength winds, heavy snow, torrential rain, and coastal flooding.

“Remember Jan. 4th?” the National Weather Service in Boston warned. “This storm has the potential of being worse!”

The storm will begin to develop Thursday evening with heavy winds up and down the seaboard. Pressure in the atmosphere off the Atlantic coast may suddenly plummet Friday evening, according to several forecasts. This could trigger “bombogenesis,” when a mid-latitude cyclone rapidly intensifies and drops atmospheric pressure drastically—at least 24 millibars over 24 hours.

A potent storm system will develop off the East Coast this evening, bringing a range of hazards to portions of the northeastern US: damaging winds, coastal flooding, heavy rain and winter weather. Follow your local office for what to expect in your area: https://t.co/GWrG0hTRHN pic.twitter.com/vCmVAAf99p

The Weather Channel says high wind watches and warnings are in effect from Maine to the southern Appalachians, including “virtually the entire I-95 urban corridor from Boston to Washington DC.” Some airlines are already waving change fees for flights along the East Coast.

Forecast wind gusts (knots) from the GFS 00z Friday-Saturday…note the development of winds around 50-knots over DC — which heads into the Atlantic. Meanwhile, New England takes a body blow from the extreme winds around the center of Low Pressure
Link: https://t.co/1NaHs4O2cA pic.twitter.com/IK5hMQe46l

The East Coast might not have much time to recover after Winter Storm Riley. “Unfortunately, there is increasing potential for another major coastal storm by the middle of next week,” the Weather Channel told USA Today