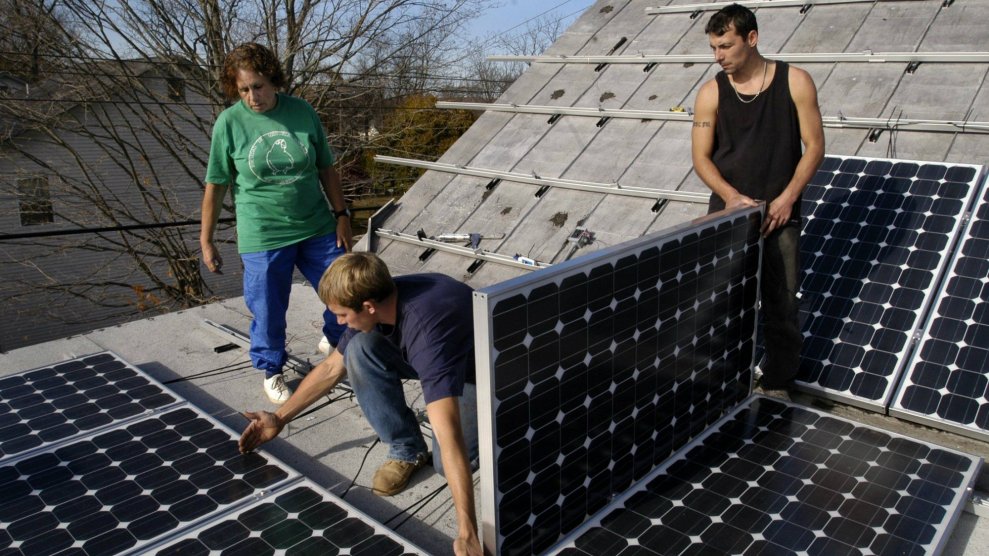 The number of jobs in the solar industry decreased last year for the first time since 2010, and the Trump administration’s new import fees on solar panels are set to worsen the decline, according to a report released Wednesday.

The industry’s job growth dipped 4 percent, a decrease of nearly 10,000 jobs, the Solar Foundation’s annual census found. Solar companies saw record-setting growth in 2016, and a slight drop was expected in 2017. But new tariffs imposed last month on the cheap, imported solar panels that fueled the solar boom are now expected to cause hiring to sputter.

“It’s very likely there will be a slowdown in job growth, perhaps more job declines into 2018 and in 2019 as well,” Ed Gilliland, senior director at the Solar Foundation, told HuffPost.

The findings mark a dramatic downturn for an industry that, just two years ago, created one in every 50 new jobs in the United States. In 2016, the industry employed 260,077 people, roughly 53 percent of whom were at companies that install solar panels. That number fell to 250,271 last year, though installation still made up 52 percent of jobs.

Part of the reason for the decline is that few companies expected the Republican-controlled Congress to renew the federal investment tax credit at the end of 2015. That prompted a rush to build solar projects while the financial benefits were still in place, and, given the months it takes to develop and construct solar farms, the boom carried over into 2016.

Cheap solar panels made overseas helped the solar industry grow 168 percent since 2010. But fears over new trade restrictions on those panels loomed large in 2017.

In April, Suniva, a Georgia-based manufacturer owned by a Chinese company, filed a complaint with the US International Trade Commission after declaring bankruptcy, arguing that it was impossible to compete with imported prices. In May, SolarWorld, the Oregon-based subsidiary of a German panel marker, joined the complaint. The companies requested that the Trump administration impose tariffs on panels under the 1974 Trade Act that would more than double the price of solar cells from about 33 cents to more than 78 cents per watt.

Manufacturing made up the second-largest chunk of solar jobs since 2010, comprising roughly 15 percent of employment in both 2016 and 2017. The sector also suffered about 2 percent fewer job losses between 2016 and 2017 than installers. In August, a group of 27 solar manufacturers warned the International Trade Commission that tariffs “endanger[ed] manufacturing jobs at our factories,” and urged the agency to reject Suniva’s request.

“We have been building our companies to meet demand from a large and growing domestic solar market. That market is now under threat,” the companies wrote in an open letter. “As true US solar manufacturers, and on behalf of our 5,700 workers, we ask that you not grant Suniva’s request for global safeguard measures.”

But on Jan. 22, President Donald Trump approved a 30 percent fee on all imported panels, decreasing by 5 percent per year over four years. The fee was in line with what the International Trade Commission recommended in October, a proposal Suniva called “disappointing” because it was not as aggressive as what the company requested. Still, Suniva and SolarWorld executives “applauded” Trump in a joint statement, and urged him to increase the first-year tariff to 50 percent.

Roughly half of all solar equipment used in the US this year is expected to come from overseas. The new fees are forecast to send solar installations plummeting by 11 percent over the next five years, according to GTM Research, a renewable energy market data firm. Bloomberg New Energy Finance projected solar deployments to drop by 5 percent over seven years, owing to a predicted uptick in construction after the four-year tariff expires. But the previous rate of job growth is unlikely bounce back, as solar companies seek new ways to cut costs as panel prices rise.

“There will be a recovery in how much solar is built and deployed. However, that won’t necessarily translate into jobs in the same way it has in the past,” Hugh Bromley, a solar analyst at Bloomberg New Energy Finance, told HuffPost. “The US solar industry is begging for some labor efficiencies to be found to drive costs down to where they need to be to be competitive.”

The Solar Energy Industries Association, a trade group, said the tariffs would lead to 23,000 job losses this year alone in both the solar installation and manufacturing sectors.

“The tariff decision was unfortunate, we were disappointed in it, and it will have an unnecessary negative effect on solar deployment and employment,” Daniel Whitten, a spokesman for the SEIA, told HuffPost. “But in the years ahead solar is going to resume its place as the leading new source of electricity in this country. It’s just unfortunate that it’s been perhaps delayed by this tariff decision.”

The Solar Foundation conducted its survey of 2,389 solar businesses―some of which included various outposts of the same company―in October and November, using the Bureau of Labor Statistics’ methodology to make 59,300 phone calls and send 35,000 emails. At this point, the White House’s impending decision on the trade case hung over the industry, and the survey responses reflect the uncertainty over the ruling, Gilliland said.

Even in anticipation of the decision, the survey projected a 5.2 percent increase in jobs in 2018 to a record 263,293, with a 6.2 percent spike in installation and a 1 percent manufacturing bump.

It’s unclear how much the tariffs will affect those outlooks in 2018, given that many projects have already purchased their building materials. But Gilliland said the fees could hurt all sectors.

“If the prices go up instead of down, which could happen because of the trade case, then we very likely could see a fall off in installation jobs, and potentially even a falloff in manufacturing jobs as their installers are using less of the manufactured goods,” he said.

It’s not all gloomy for the industry, however. Solar jobs increased in the District of Columbia and 29 states in 2017, including Utah, Minnesota, Arizona, Colorado, Pennsylvania, New Jersey and Tennessee. States and cities emerged as vital counterbalances over the past year after Trump announced plans in June to withdraw from the Paris climate accord and proposed slashing funding for renewable energy.

In July, mayors from 1,481 cities representing 148 million people and 41.8 percent of electricity use across the US signed a pledge to go 100 percent renewable by 2035. California vowed to get 50 percent of its electricity from renewables by 2030, and could now hit that target a decade early. New York set the same goal, and New York City Mayor Bill de Blasio announced plans last month to divest a $5 billion stake in fossil fuels from the city’s five pension funds and sue oil companies for damages related to sea-level rise.

“What we’re seeing is many of the states are still setting renewable portfolio standards and setting goals for renewable energy,” Gilliland said. “So there’s very strong momentum toward renewable energy.”

Those regional policies caused diversity to increase in some parts of the solar workforce, and fall in others. Black representation climbed nearly 1 percent in 2017, largely due to the growth of jobs in areas with large black populations, such as the District of Columbia and several Southeastern states. But employment of Hispanics and Asians dipped 0.4 percent and 0.7 percent, respectively, as states like California, Texas and Hawaii saw jobs contract in 2017. The number of women employed in solar fell 1.1 percent as jobs decreased in the sales and distribution sector, where most women in the industry work.

The majority of Americans understand global warming is happening, and that humans are causing it, though partisan divides remain stark over how to address greenhouse gas emissions. Solar energy nonetheless enjoys sweeping support, with nine out of 10 US adults in favor of expanding its use, according to a 2016 Pew Research Center poll. Solar capacity around the world is still on track to multiply 14 times over by 2040, a Bloomberg New Energy Finance study found last year.

“Overall the people and the country are very positive toward solar,” Gilliland said. “The long-term outlook is still very strong. But we will feel some headwinds over the next year.”