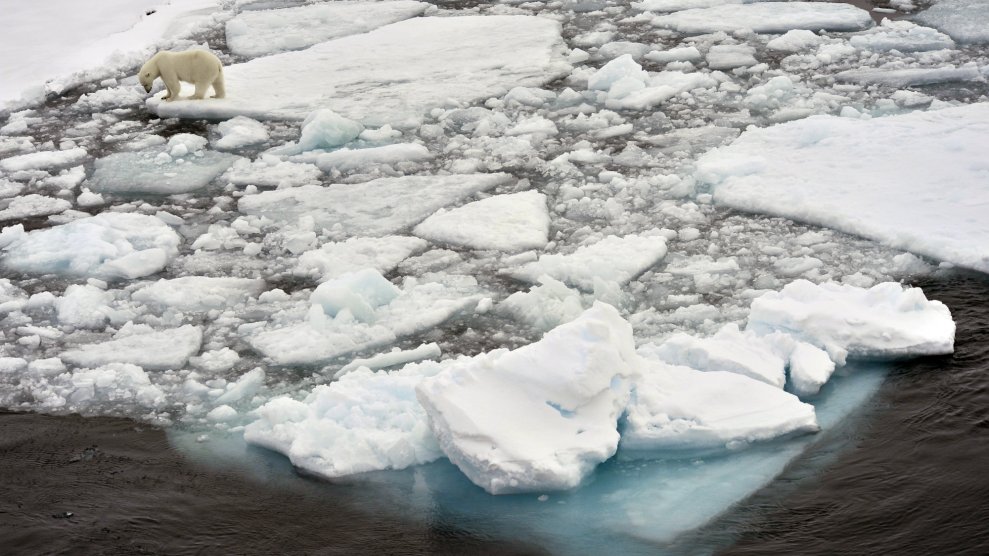 An alarming heatwave in the sunless winter Arctic is causing blizzards in Europe and forcing scientists to reconsider even their most pessimistic forecasts of climate change.

Although it could yet prove to be a freak event, the primary concern is that global warming is eroding the polar vortex, the powerful winds that once insulated the frozen north.

The north pole gets no sunlight until March, but an influx of warm air has pushed temperatures in Siberia up by as much as 35C above historical averages this month. Greenland has already experienced 61 hours above freezing in 2018—more than three times as any previous year.

Seasoned observers have described what is happening as “crazy,” “weird,” and “simply shocking”.

“This is an anomaly among anomalies. It is far enough outside the historical range that it is worrying—it is a suggestion that there are further surprises in store as we continue to poke the angry beast that is our climate,” said Michael Mann, director of the Earth System Science Center at Pennsylvania State University. “The Arctic has always been regarded as a bellwether because of the vicious circle that amplify human-caused warming in that particular region. And it is sending out a clear warning.”

Although most of the media headlines in recent days have focused on Europe’s unusually cold weather in a jolly tone, the concern is that this is not so much a reassuring return to winters as normal, but rather a displacement of what ought to be happening farther north.

At the world’s most northerly land weather station—Cape Morris Jesup at the northern tip of Greenland—recent temperatures have been, at times, warmer than London and Zurich, which are thousands of miles to the south. Although the recent peak of 6.1C on Sunday was not quite a record, but on the previous two occasions (2011 and 2017) the highs lasted just a few hours before returning closer to the historical average. Last week there were 10 days above freezing for at least part of the day at this weather station, just 440 miles from the north pole.

“Spikes in temperature are part of the normal weather patterns—what has been unusual about this event is that it has persisted for so long and that it has been so warm.”

“Spikes in temperature are part of the normal weather patterns—what has been unusual about this event is that it has persisted for so long and that it has been so warm,” said Ruth Mottram of the Danish Meteorological Institute. “Going back to the late 1950s at least we have never seen such high temperatures in the high Arctic.”

The cause and significance of this sharp uptick are now under scrutiny. Temperatures often fluctuate in the Arctic due to the strength or weakness of the polar vortex, the circle of winds—including the jetstream—that help to deflect warmer air masses and keep the region cool. As this natural force field fluctuates, there have been many previous temperature spikes, which make historical charts of Arctic winter weather resemble an electrocardiogram.

But the heat peaks are becoming more frequent and lasting longer—never more so than this year. “In 50 years of Arctic reconstructions, the current warming event is both the most intense and one of the longest-lived warming events ever observed during winter,” said Robert Rohde, lead scientist of Berkeley Earth, a non-profit organization dedicated to climate science.

The question now is whether this signals a weakening or collapse of the polar vortex, the circle of strong winds that keep the Arctic cold by deflecting other air masses. The vortex depends on the temperature difference between the Arctic and mid-latitudes, but that gap is shrinking because the pole is warming faster than anywhere on Earth. While average temperatures have increased by about 1C, the warming at the pole—closer to 3C—is melting the ice mass. According to NASA, Arctic sea ice is now declining at a rate of 13.2% per decade, leaving more open water and higher temperatures.

Some scientists speak of a hypothesis known as “warm Arctic, cold continents” as the polar vortex becomes less stable—sucking in more warm air and expelling more cold fronts, such as those currently being experienced in the UK and northern Europe. Rohde notes that this theory remains controversial and is not evident in all climate models, but this year’s temperature patterns have been consistent with that forecast.

Longer term, Rohde expects more variation. “As we rapidly warm the Arctic, we can expect that future years will bring us even more examples of unprecedented weather.”

Jesper Theilgaard, a meteorologist with 40 years’ experience and founder of website Climate Dissemination, said the recent trends are outside previous warming events. “No doubt these warming events bring trouble to the people and the nature. Shifting rain and snow—melt and frost make the surface icy and therefore difficult for animals to find anything to eat. Living conditions in such shifting weather types are very difficult.”

Others caution that it is premature to see this as a major shift away from forecasts. “The current excursions of 20C or more above average experienced in the Arctic are almost certainly mostly due to natural variability,” said Zeke Hausfather of Berkeley Earth. “While they have been boosted by the underlying warming trend, we don’t have any strong evidence that the factors driving short-term Arctic variability will increase in a warming world. If anything, climate models suggest the opposite is true, that high-latitude winters will be slightly less variable as the world warms.”

Although it is too soon to know whether overall projections for Arctic warming should be changed, the recent temperatures add to uncertainty and raises the possibility of knock-on effects accelerating climate change.

“This is too short-term an excursion to say whether or not it changes the overall projections for Arctic warming,” says Mann. “But it suggests that we may be underestimating the tendency for short-term extreme warming events in the Arctic. And those initial warming events can trigger even greater warming because of the ‘feedback loops’ associated with the melting of ice and the potential release of methane (a very strong greenhouse gas).”