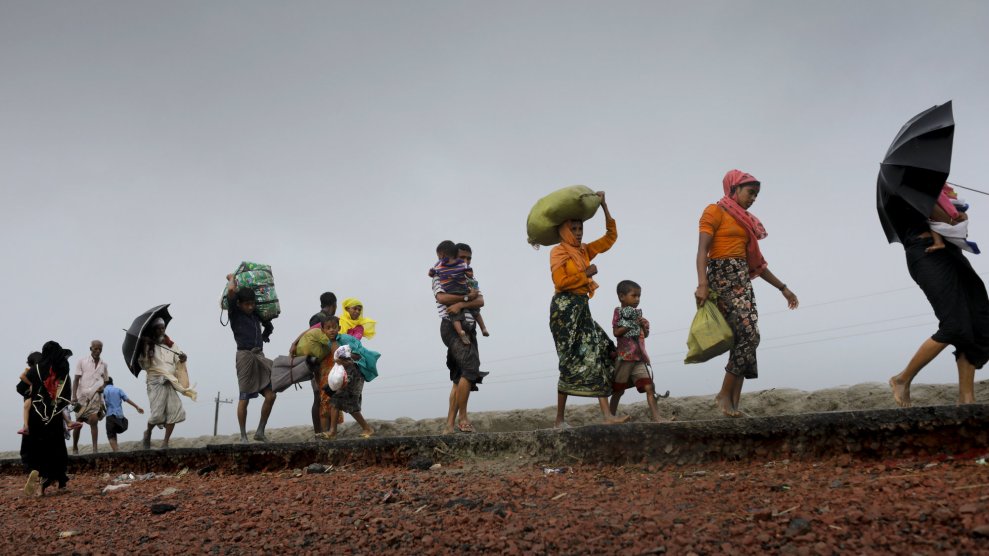 The unprecedented brutality of the 2017 hurricane season showed the potential that natural disasters have to destroy livelihoods, displace families, and uproot entire communities. The most recent example, of course, is the situation in Puerto Rico post-Maria. Experts estimate the US territory will lose close to 500,000 residents in the next two years.

According to a report by the Internal Displacement Monitoring Center, 26 million people each year have been displaced by natural disasters worldwide. And as climate change likely increases the frequency and intensity of these events, larger numbers of environmental migrants will be forced to leave their homes behind in search of safety and opportunity.

Meanwhile, experts warn that countries like the United States are currently adopting policies that indicate climate migrants will be met with closed doors as opposed to open arms. Among those are the recent moves to suspend temporary protected status for people from certain countries, like Haiti in the wake of the devastating 2010 earthquake. And just last week, President Trump nominated Ken Isaacs who has made public remarks denying climate change—to lead the United Nations’ International Organization for Migration, which has been at the forefront of addressing climate-induced displacement and migration.

As environmental factors compel more and more people to move, it seems apparent that the political winds are forming a perfect storm that will lead to humanitarian crises.

“The conversion of these two factors most often leads to tragedy,” says Mariam Traore Chazalnoel, a climate-migration specialist at the agency Isaacs was just tapped to lead (pending a vote from the organization’s membership).

In addition to boosting natural disasters, climate change is imperiling island and coastal communities by pushing up sea levels. Kiribati has already purchased land on nearby Fiji in anticipation of having to evacuate its citizens. A warming planet is also exacerbating poverty and conflict around the globe. And experts say environmental pressures affecting agriculture, fishing, or other means of livelihood can often be at the root of economic and political destabilization that forces people to leave home.

A recent study published in the journal Science found that if the planet continues to warm at its current rate, the number of migrants who apply for asylum in the European Union is likely to triple by 2100. Even in the case of the more than 5 million refugees fleeing Syria, scientists have pointed to the role warming played in spurring a drought that stoked civil unrest.

“Climate change was just one additional stressor, an exacerbating factor, that when piled in on top of everything else caused this [conflict] to happen,” says Colin Kelley, a senior research fellow at the Center for Climate and Security.

Kelley is the lead author of a groundbreaking 2015 study that detailed how drought, crop failure, and the resulting migration from rural areas to urban centers contributed to the onset of the Syrian civil war.

In 2012, amid Syria’s refugee crisis, the US designated migrants from the Middle Eastern nation eligible for temporary protected status. The Department of Homeland Security can offer the protection to émigrés from nations deemed too unsafe to return to because of armed conflict or environmental catastrophe. The status gives eligible individuals employment authorization to work in the United States, as well as protection from deportation.

“TPS has been incredibly important for thousands of Syrians in the U.S.,” Matthew Chrastek, coordinator at the American Relief Coalition for Syria, tells Grist via email. “It has allowed them to work, to build businesses, to continue their education, but most importantly, to live in peace and security.”

While President Trump announced last week that he will extend relief for nearly 7,000 Syrians with temporary protected status in the US, his administration has decided to stop accepting new applications for the program from Syrian migrants.

Temporary protected status is currently the only means to asylum for migrants to the U.S. who were affected by natural disasters. And even that policy has its limitations. Since it was only designed to provide temporary humanitarian relief, status holders are not given a green card. In fact, there is no pathway for them to become permanent residents or U.S. citizens. If the federal government decides not to renew a country’s designation, all those who have been able to build a life for themselves here lose the ability to work lawfully and can be deported.

Of the 10 countries currently designated for temporary protected status, five garnered it after suffering natural disasters. Environmental factors have also played a role in the addition of three war-torn countries: Syria, Yemen, and Somalia.

In the past year, the Trump administration has chosen not to extend the protection for thousands of migrants from El Salvador, Haiti, Sudan, and Nicaragua—effectively deeming those countries safe to return to. This drastic curtailing of the humanitarian program has implications not only for current designees, but also for nations that experience environmental catastrophes in the future.

“It’s possible that it might become less likely that TPS will be granted in the first place or that the threshold for what counts as recovery or enough recovery might be lower in this administration,” says Julia Gelatt, senior policy analyst at the Migration Policy Institute in Washington, DC.

Another limitation to temporary protected status is that it is only granted to people who are already residing in the US—those who may have entered the country prior to the disaster with a visa (like a student or tourist) or who might have been living in the country without documentation. It doesn’t allow new immigrants to enter after the disaster has occurred. That means people who are displaced and seeking refuge often have to put their lives at risk to get into the US.

“There’s a danger that people are just basically trying to move through their own means, and then you have a lot of documented incidents of migrant deaths at borders or at sea,” says the U.N. Migration Agency’s Chazalnoel. Over the weekend, more than 90 migrants died while trying to reach Europe when their boat—operated by human smugglers—capsized off the coast of Libya.

The need for TPS and more long-term immigration policies will grow if we fail to curb the worst effects of climate change. Chazalnoel adds that there is an ongoing concerted effort to develop global principles for protecting people who are forced to migrate due to climate change. “These are policy discussions which I think have intensified incredibly,” she says.

The other long-term solution, of course, is to take action to avert the effects of climate change so that people can reasonably return home or won’t need to leave in the first place.

“There are areas of the world that are getting degraded, and if we do nothing they will become uninhabitable,” Chazalnoel says. “But there is still some time—not a lot—but some time to reverse.

“There is still hope.”