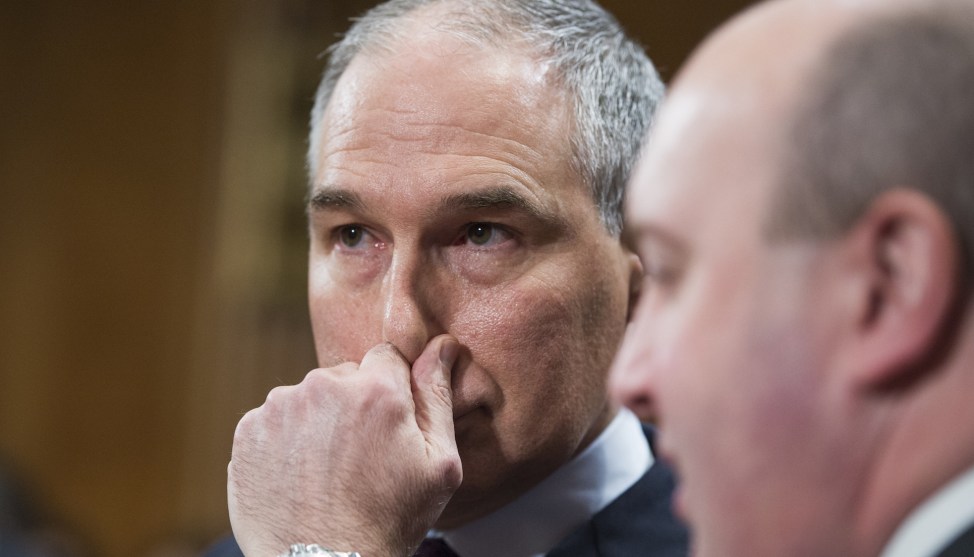 The day his boss will deliver his first State of the Union address, Scott Pruitt will be testifying before the Senate Environment and Public Works committee about his first year at the helm of the Environmental Protection Agency. Pruitt appeared before the same committee for his confirmation hearing just over a year ago and, at that time, Democratic senators zeroed in on his ties with the industries he was charged with regulating, and the 14 lawsuits against the EPA he launched as Oklahoma attorney general.

Since then, the controversies have only piled on, from the expense of his security detail, to his repeal of major clean air and water rules, to his lack of transparency and attacks on the media. Pruitt is also reported to be positioning himself to replace Jeff Sessions at  Department of Justice, although this has been denied by an EPA spokesperson.

Red-team blue-team science debate: Pruitt promised in a House hearing last month that he would provide more details on the much-discussed climate science debate, which he’s named a “red-team blue-team” exercise. His plan was to pit climate skeptics and scientists in a debate that rehashes the well-understood role of carbon pollution. Coal baron Bob Murray has been among the most vocal advocates in favor of the face-off, which he sees as a first step to undoing the EPA’s finding that carbon pollution endangers human health, and forms the legal basis for EPA climate regulations. In December, E&E News had reported that an administration official said the debate “has been put on hold,” contradicting his assurance to the House Committee that details were forthcoming. Everyone is left to wonder if it will even happen at all.

EPA-funded travel for other purposes: Early in his tenure at the EPA, Pruitt took frequent EPA-funded trips back to his home state, adding another datapoint in the speculation that he intends to run for either governor or Senator James Inhofe’s seat there. Since then, Pruitt has taken many other controversial trips. He’s traveled to roughly 30 states in a year, which the EPA defends as an attempt to get a broader range of feedback, but critics note these trips are usually dominated by private industry meetings. In addition, he’s taken at least four trips on chartered and government flights since his confirmation, at a cost to taxpayers of $58,000. At the end of the year, Pruitt went to Morocco to promote natural gas exports, a trip that was kept secret from the press. That was one of an increasing number of foreign trips as an informal ambassador for the energy industry, which environmentalists note are all outside the scope of his job protecting the environment. A January trip to Japan was cancelled due to the government shutdown.

“I think that measuring with precision human activity on the climate is something very challenging to do and there’s tremendous disagreement about the degree of impact.”

Taking science out of the equation: Pruitt has stacked industry allies on key EPA science advisory committees, instead of scientists who give independent guidance on the agency’s rulemaking and reports. The administrator explained the decision to bar scientists who receive EPA grants from serving on these committees by citing the Bible. Pruitt has taken aim at science’s role in the agency in other ways, by going full climate-change denier: “I think that measuring with precision human activity on the climate is something very challenging to do and there’s tremendous disagreement about the degree of impact,” he’s told CNBC. And he’s also contradicted the EPA’s conclusions when he’s eased restrictions on toxic pesticides, like reversing the agency’s proposed ban on the brain-damaging pesticide chlorpyrifos on farms.

Personnel choices: Since Pruitt took over, hundreds of scientists and longtime EPA staff have taken buyouts and have left the agency. Most have not been replaced. The strained personnel situation is especially dangerous when the EPA has to respond to sudden disasters, like the three major hurricanes last fall, EPA union representative John O’Grady told me. At the same time, Pruitt has hired some old acquaintances with no environmental experience to fill key posts. The Intercept reported that Pruitt hired an Oklahoma banker, Albert Kelly, to lead his Superfund task force, which Pruitt has signaled as an area he wants to prioritize during his tenure. Kelly has loaned Pruitt money through SpirtiBank to buy not only homes but a stake in a minor league baseball team.

Regulatory rollback: There are dozens of rules Pruitt has either repealed or has targeted, including the Clean Power Plan, Clean Water Rule, fuel efficiency standards, and most recently, lifting a 1995 restriction on major sources of hazardous air pollution. When he hasn’t weakened regulation, Pruitt has eased enforcement against polluters; fines are down 39 and 70 percent from the Obama and Bush administrations, respectively.

Questionable contracts: Last month, Mother Jones broke the news that Pruitt signed off on a $120,000 no-bid contract to hire a Republican firm that specializes in opposition research to track and shape press coverage. The unusual nature of the contract attracted enough attention—including demands for investigations by public interest groups and Senators—that both the firm, Definers Corp. and the EPA mutually decided to cancel the contract. But there are other ways Pruitt’s EPA remains connected to the network of groups affiliated with Definers, and this hearing could be the first time Pruitt will have to explain how and why the contract came about.