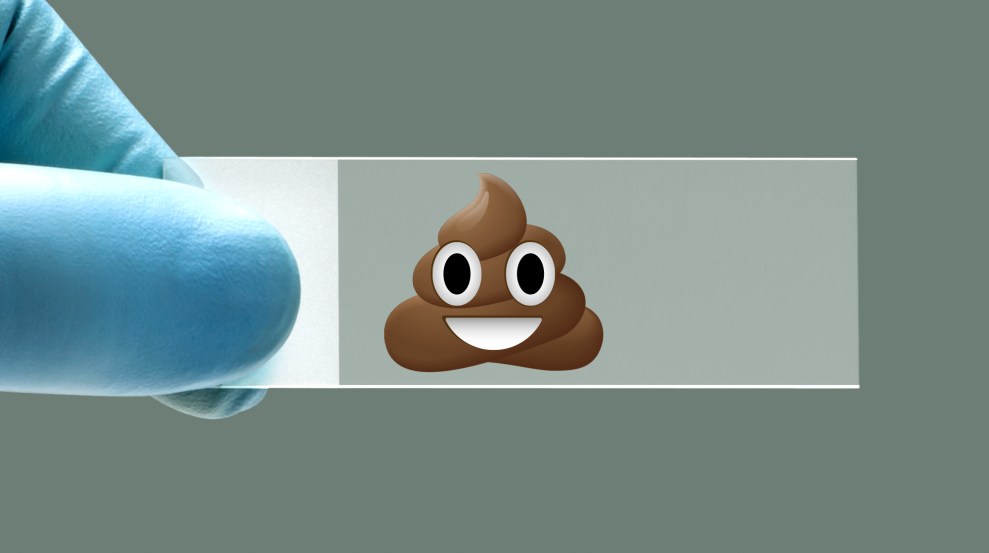 Science may have dealt with a ton of BS last year, but the field also overflows with bowel-related breakthroughs thanks to the wealth of knowledge hidden in human and animal poop.

“There’s nothing to be shy about with feces,” says Faith Walker, a genetics research professor at Northern Arizona University. “It’s becoming more and more important as a research tool.” She jokes that her lab, which identifies bat species from their feces, aims to be number one at number two.

Last year, scientists used poop to measure stress in right whales, which can indicate whether they have been entangled in traps. Poop revealed that even “herbivore” dinosaurs ate shellfish. Scientists are studying cities’ sewage to gauge the health of residents. Fossilized poop has provided clues about a 300 million-year-old swamp creature. Poop can even help count penguins from space (like “skidmarks on tighty whities”). But despite how far we have come in understanding our stools, we’re still figuring out the best way to poop in space.

Last but not least, a study published last year in the journal Soft Matter found most mammals need only 12 seconds to poop.

Here is what a few scientists had to say about recent scientific discoveries from excrement:

Bogdan Onac had the inside scoop on a thick deposit of bat poop in a Romanian cave because he spent weekends caving there during graduate school. Now a geochemistry professor at University of South Florida, Onac returned to study the three meter-deep pile of guano—the polite term for bat poop. “It’s messy if the guano is still fresh on top,” he says nonchalantly about collecting long cylindrical samples of the poop, called cores.

Examining the guano in the lab revealed that the bottom layer was at least 1,200 years old, offering a wealth of data to reconstruct the surrounding region’s ancient climate.

His team mapped past environmental conditions by analyzing nitrogen isotopes throughout the guano core, Onac explained. Bats intake nitrogen through the food chain, as it moves from the soil to plant leaves to insects to the bat. Nitrogen cycling within temperate forests closely reflects the amount of winter precipitation every year. Onac’s team found that the nitrogen isotopes in their guano cores traced a nearly exact annual record of winter precipitation over centuries, modulated by a weather pattern called the North Atlantic Oscillation.

As they explain in their paper published last fall in Scientific Reports, the findings show how scientists can use bat guano to paint a picture of ancient climates in areas where records are limited.

Most engineers don’t typically work with animal poop, but Michelle O’Malley is an exception. A professor of chemical engineering at the University of California, Santa Barbara, O’Malley works with enzymes that help breakdown plants in the guts of grazing animals. “These single-celled organisms are really good recyclers,” she says.

Because of these enzymes, animals like sheep and cows have no trouble breaking down the complex molecules in plant cell walls into simple sugars. When these animals defecate, some of the fungi that make the enzymes are ferried out in their feces.

O’Malley and her students collect samples of manure from goats, sheep, elephants, giraffes and other animals at the Santa Barbara Zoo. They take the “freshly donated” samples to the lab and then coax out the target microbes by exposing the poop to plants. So far, they’ve isolated four fungi from goats, horses, and sheep that could potentially outperform the best engineered fungi currently available. The winning microbes are especially efficient at breaking plants down into sugars, which then become the building blocks for biofuels that could one day power cars or cool down homes.

“I like what we are doing because it’s nature inspired,” O’Malley said. “Nature is the best engineer, but we are looking to speed up her process.” We are still a couple decades away from completely switching to biofuels, but scientists are making strides in biofuel development, she explained.

Luckily for Perry Barboza, most of the poop samples he deals with are frozen, or close to it. The wildlife conservation and policy professor at Texas A&M University studies the diets of ungulates like reindeer and caribou by delving into what they defecate. “There’s not a ‘scatology’ type degree,” Barboza says about studying scat. “You basically use whatever materials are available to answer questions. Fecal samples end up being one of the most useful things animals leave behind.”

Feces represent what an animal consumed and the quality of their habitat, as well as how their bodies are digesting what they ate. Barboza uses this information to analyze the ways wildlife find enough food and water to survive while adapting to changes in their environments. These findings can then help politicians make informed conservation and management decisions.

For example, he has used the plant fibers in caribou and muskoxen feces to study their diets across the Arctic. The technique, he explained, is to spot a resting and ruminating herd while flying in a helicopter, and land nearby. Eventually, the animals amble away, leaving a trail of feces ripe for study.

People’s Poop is Important, Too

The human intestine harbors about 300 trillion organisms, representing thousands of different species, and many of these microbes are essential for human health. Fecal transplants have been used as a treatment for human illness for centuries, back when people didn’t know what microscopic life forms such as bacteria and viruses were, says gastroenterologist Dr. Joseph Weiss, author of the book The Scoop on Poop!: Flush with Knowledge.

Multiple studies have shown fecal transplants are an effective treatment for Clostridium difficile infections, a potentially life threatening bacterial infection that can occur in the gut after using antibiotics. Transplantation methods have largely evolved from colonoscopies and enemas to other less invasive options, such as swallowing the feces in capsule form. “Poop pills are here and they are a good idea,” Weiss says.

Though medical experts have come a long way in understanding the importance of a healthy gut microbiome, much still remains to be discovered about the specific roles of different gut bacteria. “I have been in this field for a very long time,” Weiss says. “I am still impressed by how little we know.”
Scientists hope to identify microbes that can serve as probiotics to prevent a wide variety of conditions that are now believed to arise in the gut, such as Parkinson’s, Alzheimer’s, arthritis, and heart disease. But probiotics are being marketed before this basic information has been identified, and there is a risk that they may not be beneficial, or even potentially harmful.

All jokes aside, the American Cancer Society recommends all men and women over the age of 50 get tested for colon and rectal cancer. Thankfully, new approaches may soon make invasive colonoscopies a procedure of the past (during a standard colonoscopy, a flexible tube is inserted into the rectum and a physician guides it through the colon).

Last year, a team of researchers presented a prototype of an “electronic nose” that can identify digestive diseases that may have required an invasive procedure for diagnosis. Other approaches include capsule colonoscopy, a camera pill that captures images as it passes through the digestive tract, and at-home stool tests mailed to the laboratory that can identify the genetic markers of colon cancer and polyps. Blood tests for the early diagnosis of colon cancer and polyps are being developed, too.
Image credit: APCortizasJr/Getty; ikopylov/Getty